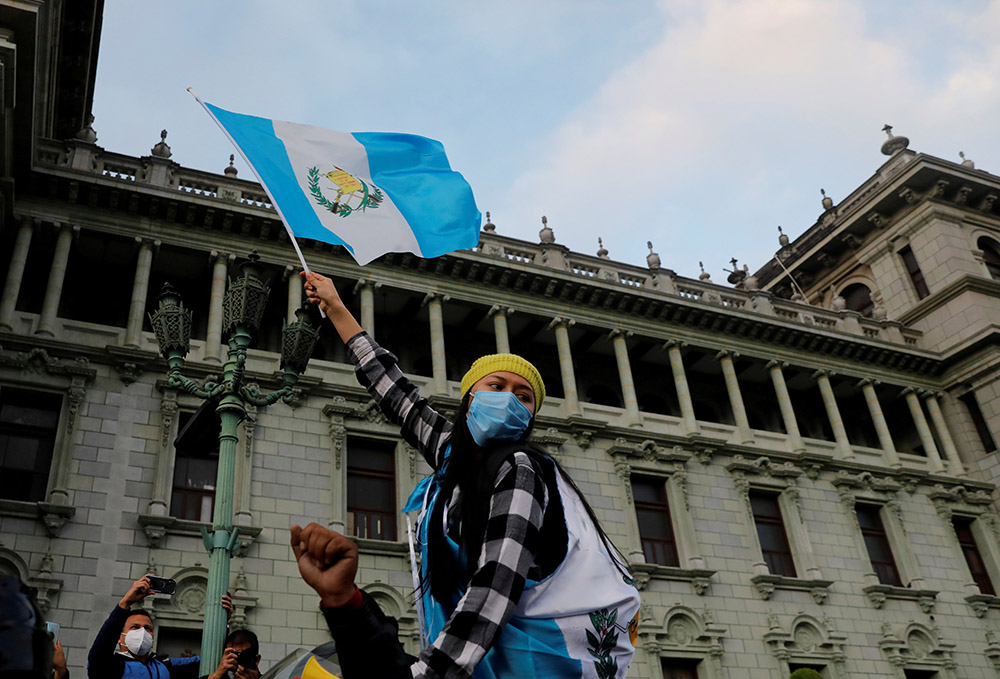 A woman holds up a Guatemalan flag during a protest to demand the resignation of President Alejandro Giammattei in Guatemala City Nov. 22. (CNS/Reuters/Luis Echeverria)

The COVID-19 pandemic has had disastrous impacts across Latin America, with more than 400,000 deaths and 11.3 million cases of infection recorded by the beginning of November.

In a region struck by abysmal social inequalities, the coronavirus has also brought severe economic consequences. According to the Economic Commission for Latin America and the Caribbean, at least 47 million jobs were lost in the second quarter of 2020.

In countries that had already been suffering with economic turmoil, the level of social conflict has dramatically risen over the past few months. Catholics have been taking part in the events, often inspired by Pope Francis' teachings against unregulated capitalism.

In Guatemala, the sudden Nov. 18 approval of the 2021 federal budget, widely seen as inadequate to meet people's needs, spurred strong reactions among the opposition and led to a mass protest two days later. A group of demonstrators ended up entering the Congress building and setting fire to it.

Guatemalan legislators who oppose President Alejandro Giammattei's administration accused his supporters in Congress of passing the budget in a nontransparent way and without enough debate. The budget focuses on reducing the government's expenditures, while cutting social aid. 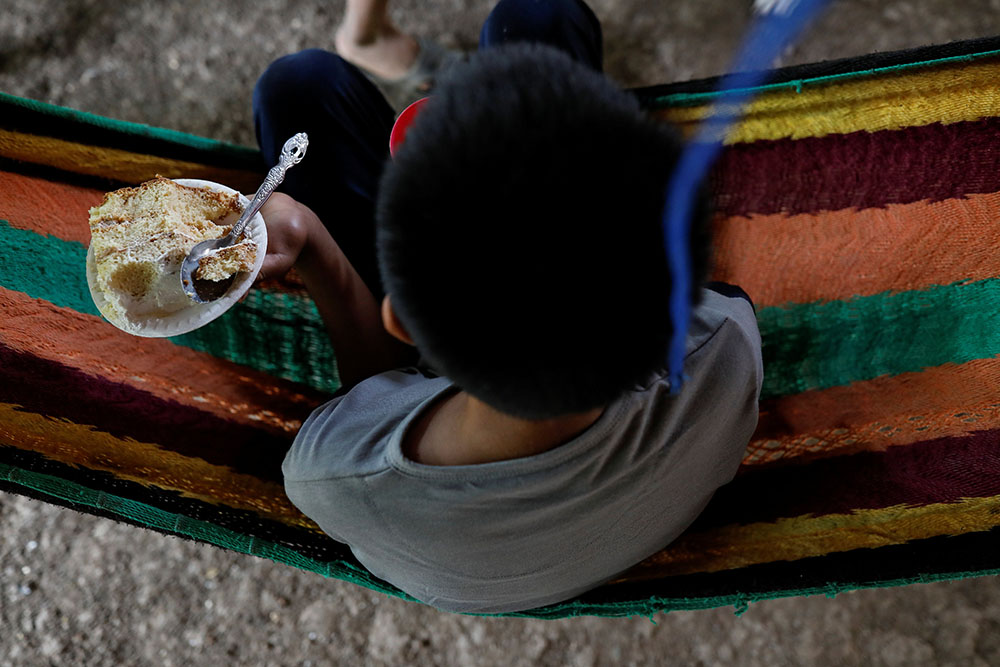 Gustavo, a disabled 12-year-old who was expelled by U.S. authorities and sent back to Guatemala under an emergency health order, holds a piece of cake as part of a welcoming party after being reunited with his father in Peten, Guatemala, Sept. 5. (CNS/Reuters/Luis Echeverria)

"The budget includes funding for the congressmen's food and, at the same time, cuts the money to be spent with a program against child malnutrition," Mario Arévalo, Caritas Guatemala's executive secretary, told NCR.

The Guatemalan bishops issued a statement Nov. 19, condemning the "hasty and presumably irresponsible" way that Congress approved the budget.

"We have had the approval of underfunded budgets for 10 consecutive years, but never before in such disproportionate amounts as in this year," said the statement. "The country's indebtedness is reaching levels that are frankly worrisome, and today's debts mean hunger tomorrow."

Arévalo said the economic crisis in the country has been increasing over the past three administrations, with "a growing rift between the rich and the poor" that has culminated in an "explosion of discontent" now.

In Costa Rica, an increasing fiscal deficit over the past few years led the Central American country to promote a tax reform in 2018, in a process that produced general social dissatisfaction.

"Now, with the pandemic, the government has negotiated a loan with the International Monetary Fund (IMF) and planned to raise taxes again, affecting particularly the poor," said Fr. David Solano, a priest in the capital of San José. 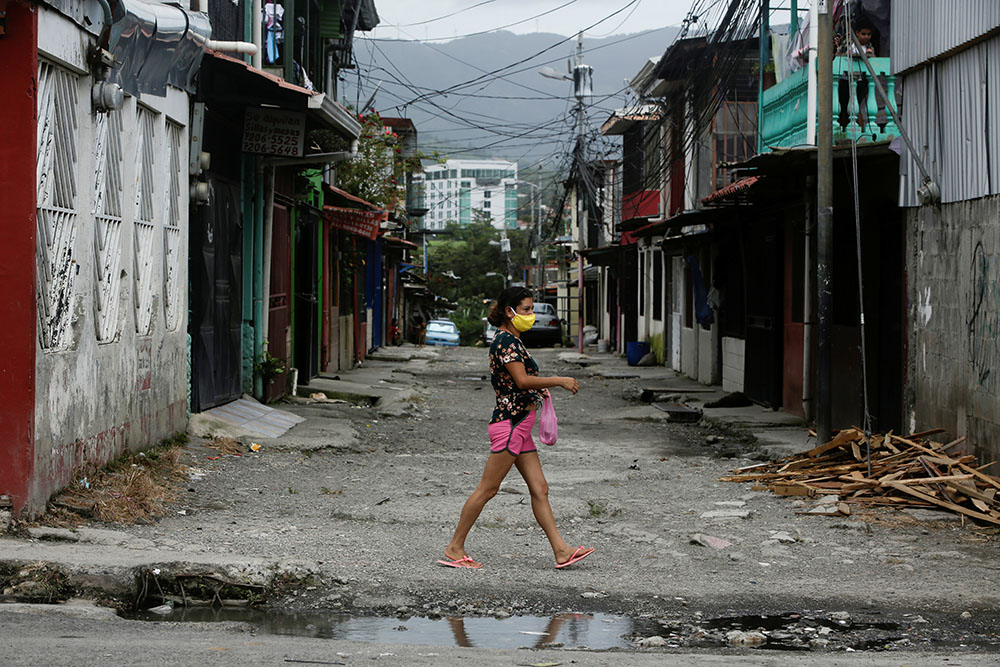 A woman wearing a face mask walks after taking a test for the coronavirus in San José, Costa Rica, June 26. (CNS/Reuters/Juan Carlos Ulate)

Solano, who serves as his bishop's delegate to the Caritas Social Pastoral commission of the San José Archdiocese, said the government initially planned to raise taxes connected to income and to the use of goods and services.

"Those are regressive taxes, which are harmful for the poor," he told NCR. "No ideas concerning the creation of taxes for the wealthy have been mentioned."

In September, some people began to protest by blocking roads throughout the country. Solano said that such demonstrations quickly escalated and Catholics — even pastoral ministers — were part of them.

"The level of social conflict became so strong that the bishops' conference decided to issue a statement calling on the country to work towards dialogue and peace," said the priest.

The statement titled "Politics must not be subject to the economy" — a quote from Francis 2015 encyclical Laudato Si' —asked the government to protect the most vulnerable in society by avoiding taxes that could impact their life conditions.

In mid-October, President Carlos Alvarado Quesada's administration decided to call up delegates from different social populations — including Solano — for a broad national dialogue. Nothing has been defined yet, but Solano believes that the government wants to approve another proposal involving the IMF, this time with more support for social institutions.

"We still hope that there are other solutions which don't involve any IMF loan," said Solano.

The level of social unrest in Panama, just south of Costa Rica, is lower, but many in the country have been expressing frustration with governmental corruption and with the pandemic's impact on the working class.

"Thousands of workers have been laid off since the outbreak of COVID-19," said Maribel Jaén, director of Caritas Panama. "Most fear they won't have their jobs back when the pandemic is over."

The government called up labor delegates and companies to debate the situation, but no concrete results have been achieved, said Jaén, who is also a sociologist. Projects to reform the country's pension system have also been met with protest by labor activists.

"Unfortunately, our economic structure is neoliberal, even though the current administration presents itself as social democratic," said the Caritas director. "Even public utilities may end up been transferred to the private sector."

During their September general assembly, the Panamanian bishops issued a statement mentioning the "popular outcry against corruption and lack of transparency in public management" and the "continual demands for better life conditions."

In Colombia, south of Panama, it has been one year since large crowds began to protest against President Iván Duque's administration. 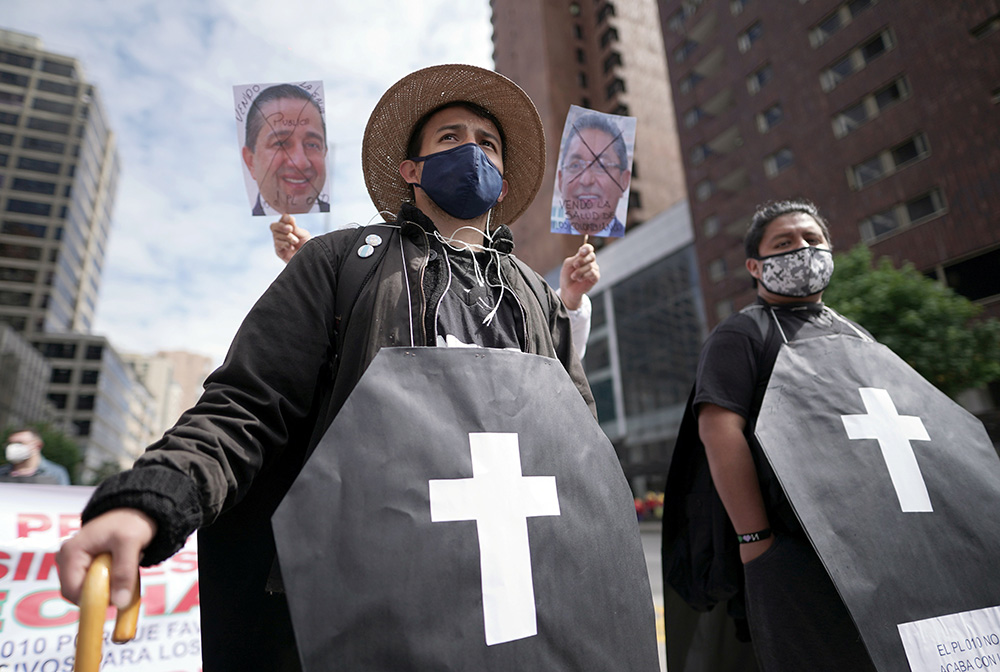 Workers and students participate in a protest against the economic policies of Colombian President Ivan Duque in Bogotá, Colombia, Nov. 19. (CNS/Reuters/Nathalia Angarita) 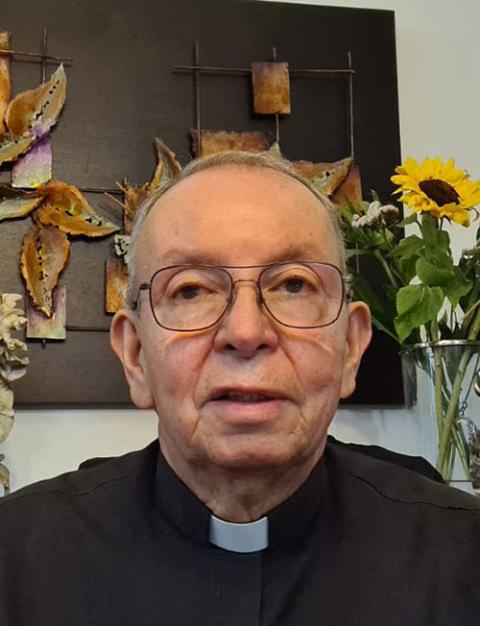 Coordinated by dozens of civic associations, the marches have been gathering labor activists who want to call attention to the high unemployment rate in the country; students and teachers who demand that higher education be paid for by the government; and social activists who are denouncing the killings of community leaders and environmentalists.

Demonstrators have also demanded the fulfilment of the 2016 peace agreement between the Colombian government and the left-wing FARC guerrilla group. After more than 50 years of conflict, the government and the rebels reached a deal to put an end to the organization, but the plan hasn't been carried out as expected.

Msgr. Héctor Henao, director of Caritas Colombia, said the church has been a key actor in the process, trying to reestablish the dialogue between the two sides.

"The church has promoted humanitarian deals in several parts of the country," Henao told NCR. "In the current crisis, we have asked the government to listen to the demonstrators' demands."

The historical problems experienced by Colombians were intensified by the COVID-19 pandemic, said Henao. "People are impoverished after seven months of quarantine," he said. "Many shop owners had to close their businesses and people who depended on the informal economy are suffering a lot."

Labor activists are demanding that the government revoke recent decrees that they say have reduced workers' rights. They also want the creation of a program of basic income to help some 30 million Colombians who are in vulnerable positions because of the pandemic.

The pursuit of new economic solutions for Latin American problems has been strengthened in Brazil with the organization of the local delegates' group that attended the Economy of Francesco, a Nov. 19-21 event that gathered together young economists, community activists, and entrepreneurs to consider a new economic system for the planet.

Sociologist Eduardo Brasileiro, a founding member of the Brazilian Organization for the Economy of Francesco, said their initiative has involved popular political forces that oppose far-right President Jair Bolsonaro's social and economic policies. 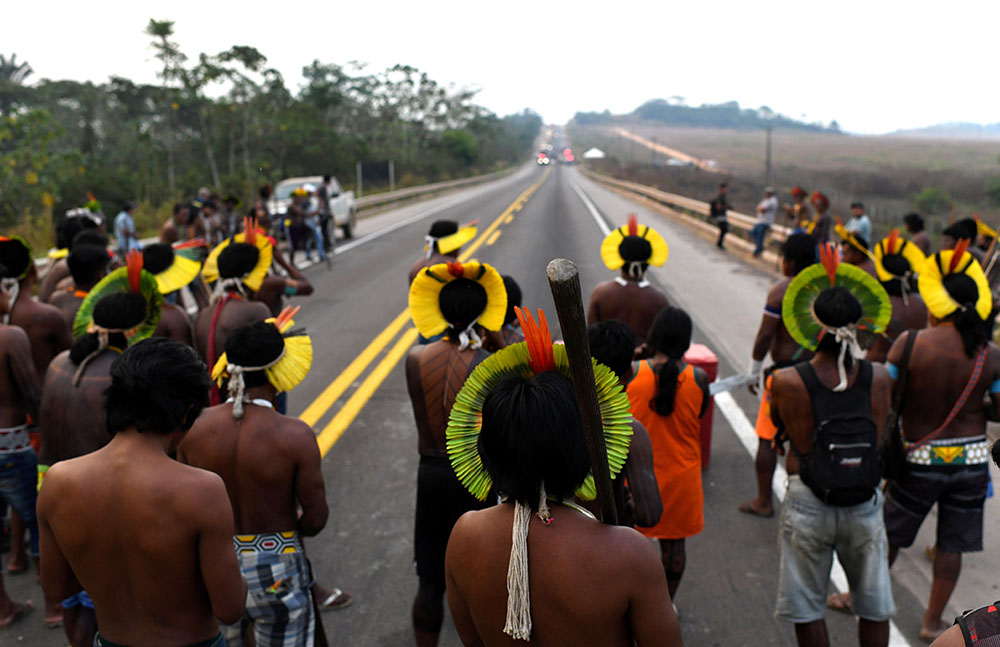 Kayapo indigenous people block a key Brazilian grain highway during a protest in Novo Brasil Aug. 18. The tribe said in a statement that the federal government had failed to protect them from COVID-19 and has not consulted them on a plan to build a railway next to their land. (CNS/Reuters/Lucas Landau) 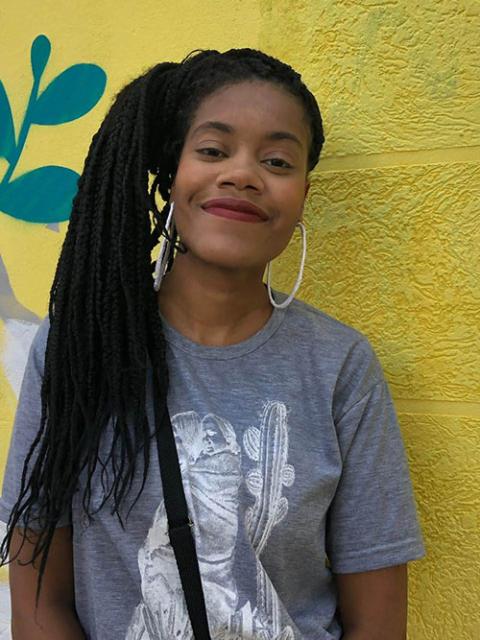 "Not only in Brazil, but in Latin America as a whole, the local groups of delegates have involved social movements and community activists in order to think on new paths for the region," he told NCR.

The current unemployment rate in Brazil is officially reported as 14.4%, but the actual percentage is certainly much higher, given that informal work arrangements are the norm. According to the poll institute Datafolha, the pandemic reduced the number of Brazilians who are economically active from 78% to 69%.

"That's why we've been discussing unemployment and the ways that solidarity economy can serve as an alternative way for the Brazilians," said Brasileiro.

Catholic activist Dai Zito, who's also one of the Brazilian delegates for the Economy of Francesco, said the event has been synthesizing existing initiatives for a new kind of economic system, propelled at the community level in different parts of Brazil.

"But in order to fight the current state of affairs, we also need to protest, to influence people through social media, and to have activists like us elected to Congress and to executive power," she told NCR.

[Eduardo Campos Lima holds a degree in journalism and a doctorate in literature from the University of São Paulo. Between 2016 and 2017, he was a Fulbright visiting research student at Columbia University. His work appears in Reuters and the Brazilian newspaper Folha de S. Paulo.]

A version of this story appeared in the Dec 11-24, 2020 print issue under the headline: Francis' teachings inspire economic protests.