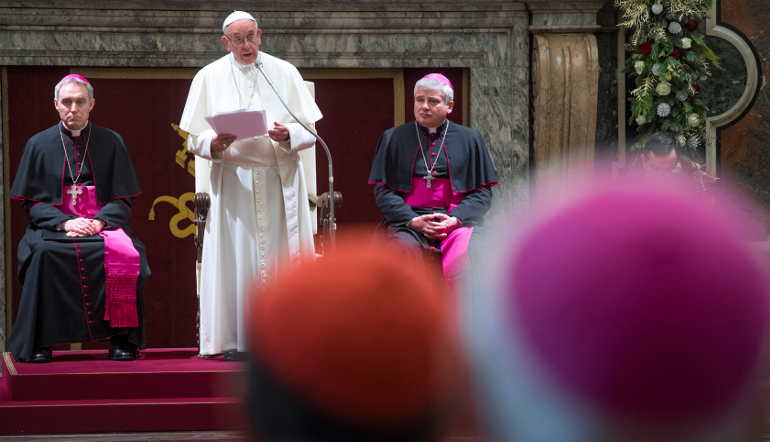 Pope Francis has called on Catholic priests and clergy who have abused children to turn themselves over to authorities, in what appears as the first such blanket command of a pontiff towards perpetrators his global institution long sought to hide or protect.

In an annual address to the high-level prelates who run the Vatican bureaucracy, the pontiff also acknowledged that the church had sometimes treated abuse cases "without the seriousness and promptness that was due" and promised to "spare no effort" in bringing to justice those who committed harm.

The pope likewise offered his "heartfelt thanks" to journalists who "sought to unmask these predators and give voice to the victims" and said an unprecedented February summit he has called with bishop presidents on protecting children would see the church "restate her firm resolve to continue, with all her force, on the path of purification."

"Let it be clear that before these abominations the Church will spare no effort to do all that is necessary to bring to justice whosoever has committed such crimes," said Francis. "The Church will never seek to cover up or not take seriously any case."

Aiming his words directly at perpetrators later in the 40-minute speech, the pontiff commanded: "To those who abuse minors I would say this: convert and hand yourself over to human justice, and prepare for divine justice."

The pope then reminded abusers of the words spoken by Jesus in Matthew's Gospel: "Whoever causes one of these little ones who believe in me to sin, it would be better for him to have a great millstone hung around his neck and to be drowned in the depths of the sea."

Francis was speaking Dec. 21 in an annual exchange of Christmas greetings with Vatican officials that he has used in previous years to upbraid the cardinals and archbishops. Last year, for example, he said some had been "bribed by their ambition." In 2016, he said those opposing his reform efforts were practicing a "malevolent resistance."

This year, however, revelations of abuse have continued to shock and enrage Catholics.

In July, the former archbishop of Washington, Theodore McCarrick, resigned from the College of Cardinals in the wake of disclosures that he sexually harassed or abused several young men over decades. In August, a grand jury in Pennsylvania reported that more than 300 priests across the state were accused of sexual assault.

Just two days before the pope's address, the attorney general of Illinois released a report Dec. 19 claiming that some 500 priests across that state accused of abuse had not been publicly identified.

One abuse survivor advocate told NCR that Francis' call for perpetrators to turn themselves in did not go far enough.

"At a moment that cries out for visionary leadership and radical change, the pope is indulging in make-believe," said Anne Barrett Doyle, co-director of abuse tracking website BishopAccountability.org.

Doyle said the pope is "pretending that the problem lies with perpetrator priests rather than a complicit and deceptive hierarchy."

"His message today does nothing to protect children, deter complicit bishops or lighten the anguish of victims," she said. "Let’s hope he is working on a host of concrete systemic reforms that he plans to roll out in February."

Francis devoted the greater portion of his Christmas remarks to what he termed "the scourge" of abuse.

The pope said that in reflecting on the subject he had thought of the Old Testament story of King David, a leader of Israel who slept with the wife of one of his soldiers, and then had the soldier killed in order to marry the now-widowed woman.

"Thinking that because he was king, he could have and do whatever he wanted, David tries to deceive … his people, himself and even God," said the pontiff.

"The king neglects his relationship with God, disobeys the divine commandments, and damages his own moral integrity, without even feeling guilty," said Francis. "The anointed continued to exercise his mission as if nothing had happened. The only thing that mattered to him was preserving his image."

Drawing an analogy with child abusers, the pontiff said: "Today too, there are consecrated men, 'the Lord’s anointed,' who abuse the vulnerable, taking advantage of their position and their power of persuasion."

"They perform abominable acts yet continue to exercise their ministry as if nothing had happened," said Francis. "They have no fear of God or his judgment, but only of being found out and unmasked."

Beyond commanding abuser priests to turn themselves in, the pontiff did not outline any specifics for how the global church would fulfill his promise to do "all that is necessary" to bring perpetrators to justice.

But referring to the February summit to which he has called all the presidents of the world's conferences of Catholic bishops, Francis said that during the meeting the church will "question, with the help of experts, how best to protect children, to avoid these tragedies, to bring healing and restoration to the victims, and to improve the training imparted in seminaries."

Clergy abuse survivors and advocates have long claimed that church officials in the past have covered up for abusers, in view of protecting the global institution from scandal or government inquiry. Both the Pennsylvania and Illinois reports also pointed to bishops who did not report known abusers to police.

Francis is the first pope to acknowledge that the church waited too long before taking reports of clergy sexual abuse seriously. In a September 2017 address to a papal commission he created to advise him on clergy abuse, the pontiff thanked men and women he called "prophetic" in urging the church to face the problem.

In his Christmas address, the pope returned to the biblical story of David to note that the king only acknowledged he had sinned with the help of the prophet Nathan.

"Today we need new Nathans to help so many Davids rouse themselves from a hypocritical and perverse life," said Francis.

"Please, let us help Holy Mother Church in her difficult task of recognizing real from false cases, accusations from slander, grievances from insinuations, gossip from defamation," the pontiff continued. "This is no easy task, since the guilty are capable of skillfully covering their tracks."

Even with his focus on the continued abuse crisis, Francis also found time in his address to return to some of his more traditional Christmas themes.

The pontiff told the Vatican officials not to act "like an elite group who think they have God in their pocket," and warned them as well against seeing themselves as "God's toll-keepers and not servants of the flock entrusted to their care."

A version of this story appeared in the Jan 11-24, 2019 print issue under the headline: Francis tells perpetrator priests: 'Prepare for divine justice'.