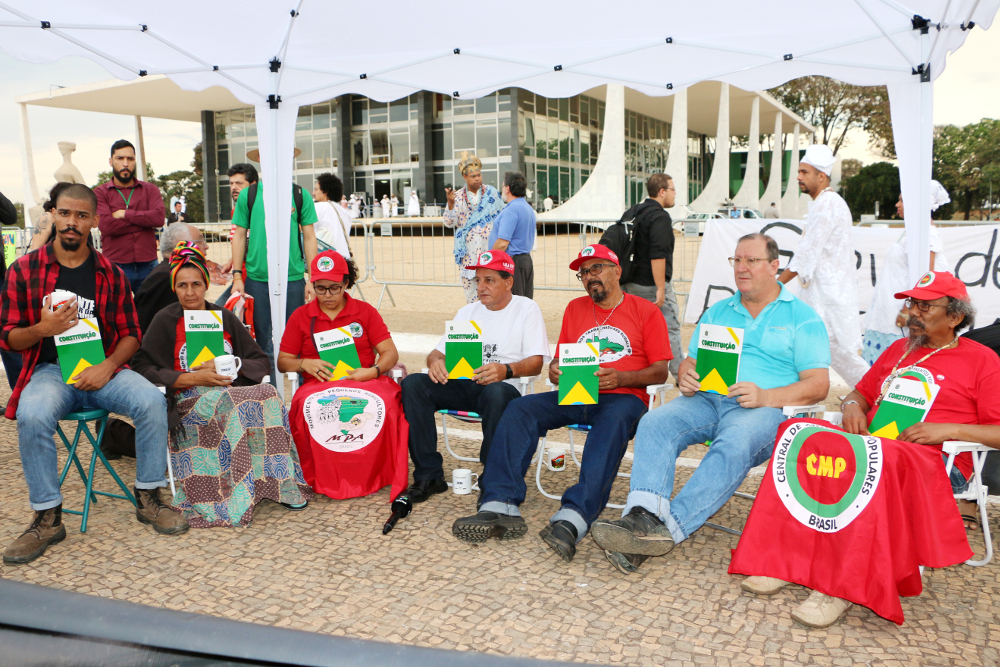 Six Brazilians are holding a hunger strike to demand that former President Luiz Inacio Lula da Silva be released from jail and be allowed to run for the presidency in October. Second from right is Franciscan Franciscan Br. Sergio Gorgen. (CNS/Adilvane Spezia)

Since the end of July, six Brazilians, including Franciscan Br. Sergio Gorgen, have been on a hunger strike to denounce the deteriorating conditions of many Brazilians due to increased violence, unemployment and hunger.

"From the neck up, I'm great," Gorgen told Catholic News. "From the neck down, I'm a bit debilitated," added the 62-year-old religious, who entered the 18th day of the hunger strike Aug. 17.

The hunger strikers are denouncing the social policies adopted by the current administration and the country's court system, which they say is not obeying the Brazilian Constitution.

"The STF (Federal Supreme Court) has a duty to apply the constitution; it has the responsibility of making sure that the constitution is observed and, right now, in certain cases, it is not," said Gorgen.

"It is an extreme action because we today are facing an extreme situation," he added.

The group met with Carmen Lucia Rocha, Brazil's Supreme Court chief justice, in mid-August and asked her to free former President Luiz Inacio Lula da Silva and allow him to run in the October presidential race.

Gorgen said the former president is in prison not because of corruption, but because he went against powerful groups who do not care about the lower classes. He said that only Lula, with his policies directed toward the poorest in Brazil, can restore hope.

"We ask that the court allow the people to vote for whom they choose, for whom they feel will look after them, and that person is Lula," he said.

Brazil's Franciscans released a note in support of Gorgen's actions.

"Since 2016, the situation faced by Brazilian society has been one of the increase in misery, hunger, violence, loss of rights and disrespect of the constitution," said the note, signed by Franciscan Fr. Ederson Queiroz, head of the Franciscans in Brazil.

The strikers said they were willing to continue until authorities meet their demands. The six are being monitored by doctors, and the latest reports show that although debilitated, they remain in good health.