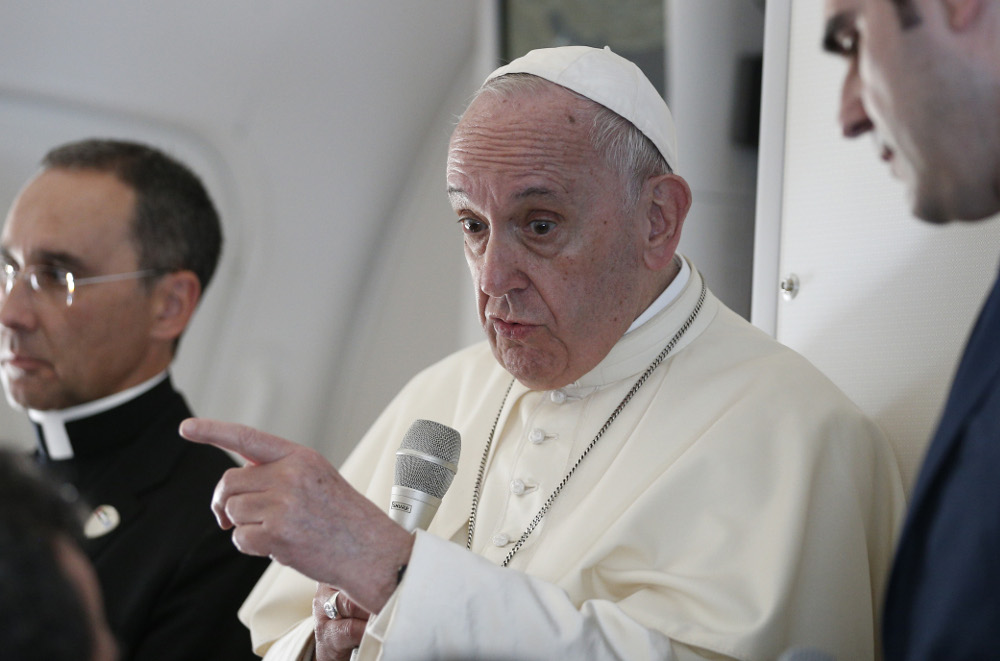 Pope Francis answers questions from journalists aboard his flight from Abu Dhabi, United Arab Emirates, to Rome Feb. 5, 2019. Leaders of the three branches of the French religious Community of St. John issued a statement in response to the pope's remarks on the plane that referenced their order being dissolved by Pope Benedict XVI because of sexual abuses. (CNS/Paul Haring)

The leaders of three branches of the French religious Community of St. John insist their order has enacted strong protections against clerical sexual abuse, including the abuse of its nuns by its priests and brothers.

Leaders of the men's community and the active and contemplative groups of women issued a statement Feb. 7 after Pope Francis spoke of a new religious order dissolved by then-Pope Benedict XVI "because the slavery of women, including sexual slavery, had become part of it."

The pope made his remarks Feb. 5 to reporters flying back to Rome with him from the United Arab Emirates.

Alessandro Gisotti, interim director of the Vatican press office, identified the order as the French Community of St. John. He also later issued a statement clarifying that the pope was not talking about actual "sexual slavery," but " 'manipulation,' a form of abuse of power that is reflected also in sexual abuse."

The statement from the French community acknowledged, as the order had done in 2013, that Dominican Fr. Marie-Dominique Philippe, founder of the community, "had committed acts contrary to chastity with several adult women whom he accompanied at the time," including some of the consecrated sisters.

"The government of the Brothers of St. John is committed to process every case of abuse in accordance with the directives of the Catholic Church and the civil law of the country where the act was committed," it said.

The brothers "have taken a proactive stance to prevent abuse and to respond quickly and effectively to the cases of abuse that have taken place," the statement said. The measures "include, but are not limited to: better vocational discernment, emotional maturity formation and procedures validated by the Vatican for dealing with cases of pedophilia and sexual abuse."

All cases, they said, are referred to police and are examined by "a commission composed of professional lay persons to examine carefully every testimony, complaint or admission of an abusive behavior."

In a message posted on the order's website in French, English and German, the leaders of the three branches told "any person abused by a member of our religious family" that "we are ready to listen to you and take action according to the established norms. Anyone concerned may contact the commission established by the Brothers of St. John — sos.abus@stjean.com — or the commission set up by the conference of bishops in France: paroledevictimes@cef.fr."