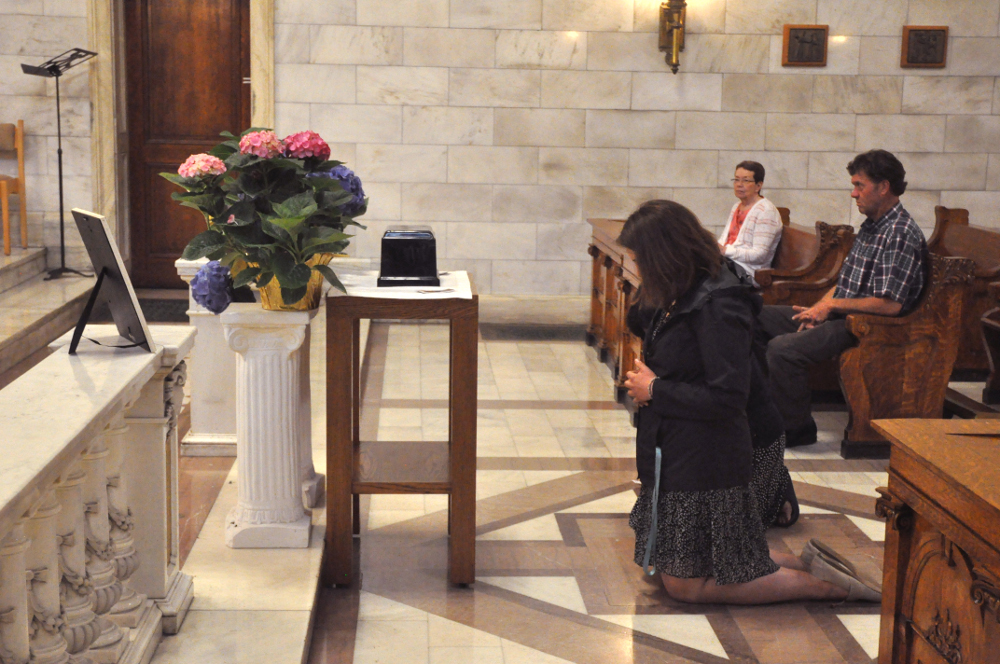 Theresa Inoue, coordinator of evangelization and missionary discipleship at the SS. Peter and Paul Cathedral in Indianapolis, kneels in prayer May 8 before the created remains of William "Paco" Pryor before a funeral for him in the cathedral's Blessed Sacrament Chapel. (CNS/The Criterion/Sean Gallagher)

In his own way, William "Paco" Pryor never considered himself homeless during the more than 20 years that he lived behind SS. Peter and Paul Cathedral in Indianapolis.

Instead, he found his own version of what most people long for in a "home" — a place where he was welcomed and embraced by people who cared about him.

On May 8, that embrace surrounded Pryor again during his funeral in the Blessed Sacrament Chapel of the cathedral. He died in a nursing home in Indianapolis April 3 at age 74.

At the funeral, many of the dozens of people who came to say their final goodbyes to Pryor were current or former cathedral staff members and volunteers at its Cathedral Kitchen and Food Pantry, which regularly served food to Pryor and continues to do so daily for people in need in Indianapolis. People who minister at the Archbishop Edward T. O'Meara Catholic Center across the street from the cathedral also attended.

Over the years, many of these people had tried to persuade Pryor to go to a homeless shelter and transition to more permanent housing, but he consistently refused, seeing his place behind the cathedral as his home.

"No doubt, William's life circumstances and his life choices helped lead him to this place, which was home for him for so many years," said Deacon Nathan Schallert in a homily during the funeral. "He found people who cared. William landed in a place that had suitable shelter, great hot food, access to clothing. He found a place where he could live out life's journey."

His time at the cathedral came to an end on a hot and humid day in June 2018 when Liza Crane, a registered nurse, found Pryor in shock from dehydration. As part of her work at Pedigo Health Clinic of Eskenazi Health in Indianapolis, Crane regularly drives around the city in a van to check on the health of homeless people.

Crane knew that Pryor needed to be treated in a hospital, but he refused to go until convinced by Diana Hay, the cathedral parish's executive assistant and events coordinator. She had known Pryor since coming to work at the cathedral parish in 1998.

"He was a part of the cathedral," Hay said. "All the parishioners were aware of him. He was such a presence, such an instrument of kindness for everybody. People would go out of their way to help him." 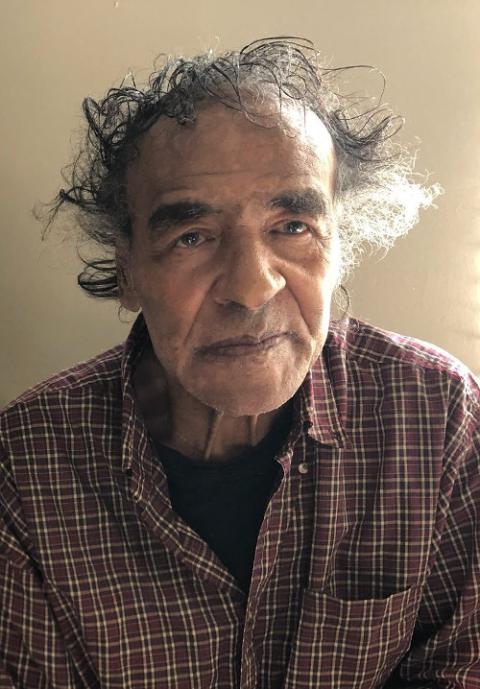 William "Paco" Pryor is seen in this undated photo. (CNS/courtesy The Criterion)

After being treated for severe dehydration, Pryor experienced other health challenges, which led to his becoming a resident of a nursing home in the city and dying there. His cremated remains will be interred at a later date at Holy Cross Cemetery in Indianapolis through the generosity of private donors.

Nora Cummings, a retired cathedral parish staff member who is now a resident at the St. Augustine Home for the Aged, attended Pryor's funeral. She had known him for decades and saw the funeral as an act of mercy and an expression of the Catholic Church's belief in the dignity of all people.

"Homeless people are human," Cummings told The Criterion, newspaper of the Archdiocese of Indianapolis. "Homeless people have needs, just like all of us. They need someone to care about them, someone just to know that it's OK, even though they're homeless."

Deacon Stephen Hodges, who, along with Schallert, ministers at the cathedral parish, said the homeless have a significant place in the life of the faith community and that its staff members, volunteers and parishioners "see the face of Christ" in them.

"They're not transparent," said Hodges. "They don't look through them. They try to find out their names. That's important.

"It speaks to our Christian and Catholic upbringing. All people are created in God's image and likeness and, therefore, should be treated that way regardless of their situation."

Crane attended the funeral and appreciated the dignity that the cathedral parish community showed Pryor in his life and in his death.

"When you work with the homeless, you worry that they don't matter to other people," she said. "They're often called the invisible people, because they're not seen. Just to know that that many people cared about him was very touching. He felt at home there."