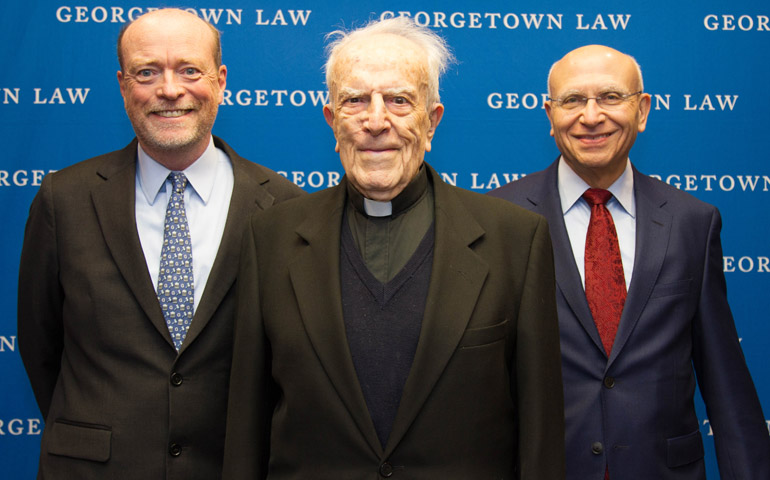 The celebrated Jesuit scholar and canonical theologian, Fr. Ladislas Orsy, was feted Jan. 24 at an all-day program at the Georgetown University Law Center, where he holds a visiting professorship. His more than 60-year career includes serving as a bishops' expert adviser at the Second Vatican Council and working on the preparation of the new Code of Canon Law, adopted in 1983.

The program was made up of panel presentations covering three themes of Orsy's long career: the origins of human rights, the significance of Vatican II, and the nature and interpretation of canon law, and of law more generally. A final panel focused on Orsy as priest, teacher and colleague.

Orsy, 96, endured the praise of colleagues and former students alike with humility and good cheer, offering thoughts after each panel and even a rebuttal or two throughout the day. He frequently drew laughter from the crowd of about 100 people, which included the former U.S. ambassador to Hungary, Orsy's native country.

"I'm overwhelmed by the learning here," Orsy said after the first panel, on international human rights, "so what could I do but try to pull out something from myself … to raise some new questions?"

He then proceeded to reflect on whether, in all the talk about human rights, there is enough talk of human obligation and "the obligation of the community to serve the rights of the individual?"

Remarking on the legacy of the Second Vatican Council, Orsy said that "the church became much more aware that it's part of the human family," and less "monarchical." But he also questioned whether forward progress continues to be made, noting that structures are easy to change, but thinking, less so.

"I would say we have a long way to go," he noted, adding dryly and to much chuckling from the audience, "Sometimes, when I have nothing better to do, I try to reflect how long this will take." 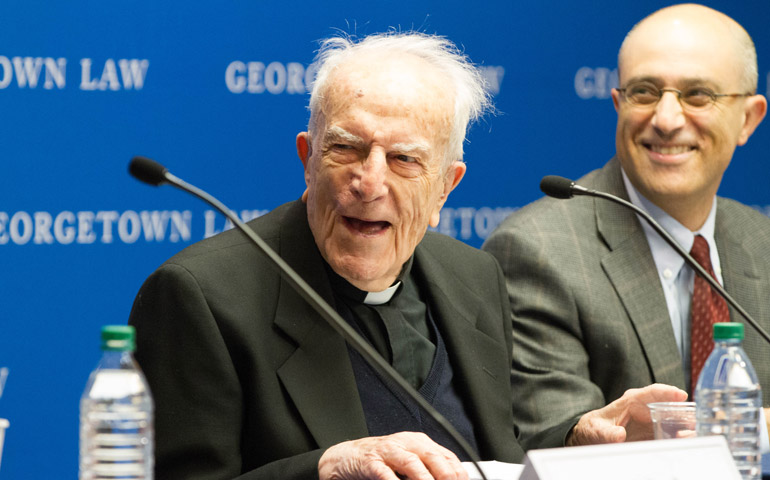 Ever the teacher, he said that such change must be rooted in education. It was a theme to which he returned over and over throughout the event, and in a one-on-one interview the following day, where he pulled out a much-worn copy of Thomas Aquinas' Summa Theologica (in Latin) to illustrate the practice of making objections and counter statements before making the true argument.

One of Orsy's former students, Fr. James Coriden, a professor of church law and dean emeritus of the Washington Theological Union, spoke on the canon law panel. He held up a sheaf of original, handwritten class notes from the 1960 academic year at the Gregorian University in Rome, proclaiming them to be "about 60 percent accurate" and guessing that he had probably known Orsy longer than anyone else in the room.

"He opened up whole new horizons of the law for us, far from the narrow examination of the law itself, which is what everybody else taught," said Coriden.

Of Orsy's voluminous output, Coriden noted that his target audience was not just scholarly. "He published nine articles in America magazine in one year," said Coriden. "My point is, he cared about what the people of the church thought, the people of God."

Orsy currently teaches Roman law, philosophy of law, canon law, and the philosophy of human rights at Georgetown. He has published more than 200 articles and nine books, including Theology and Canon Law: New Horizons for Legislation and Interpretation and Receiving the Council: Theological and Canonical Insights and Debates.

"His energy is nothing short of prodigious," said William Treanor, the dean of the law school, in his introductory remarks.

As they prepared to honor Orsy, Treanor said, "What we heard again and again is 'He's a great man.' "

The final panel offered opportunities for more personal reflection on Orsy's influence in the lives of his friends, students, and fellow Jesuits.

"He has a gentle soul and a restless mind," said Naomi Mezey, a Georgetown law professor who regaled the audience with a story of how Orsy translated her Hungarian surname upon their first meeting. "It's nicer than a field, but it's not as nice as a meadow," he told her.

"The divine gift, whether you believe in God or not, is you have the capacity to create, and you make a discovery and you say 'Eureka!' This creativity, the nourishing and sustaining of it, giving it room — that's the best education."
—Jesuit Fr. Ladislas Orsy

The two shared a hallway for 15 years, with their offices just steps away from each other, affording Mezey many opportunities to become both friend and mentee.

"This entire day has been a testament to Fr. Orsy's beautiful and restless mind," she said, adding that his passion and curiosity often sparked the same in his students.

That, he told NCR the day after the program, is the key to teaching, and to learning. Creativity, he maintains, is our greatest asset.

"The divine gift, whether you believe in God or not, is you have the capacity to create, and you make a discovery and you say 'Eureka!' " he said. "This creativity, the nourishing and sustaining of it, giving it room — that's the best education."