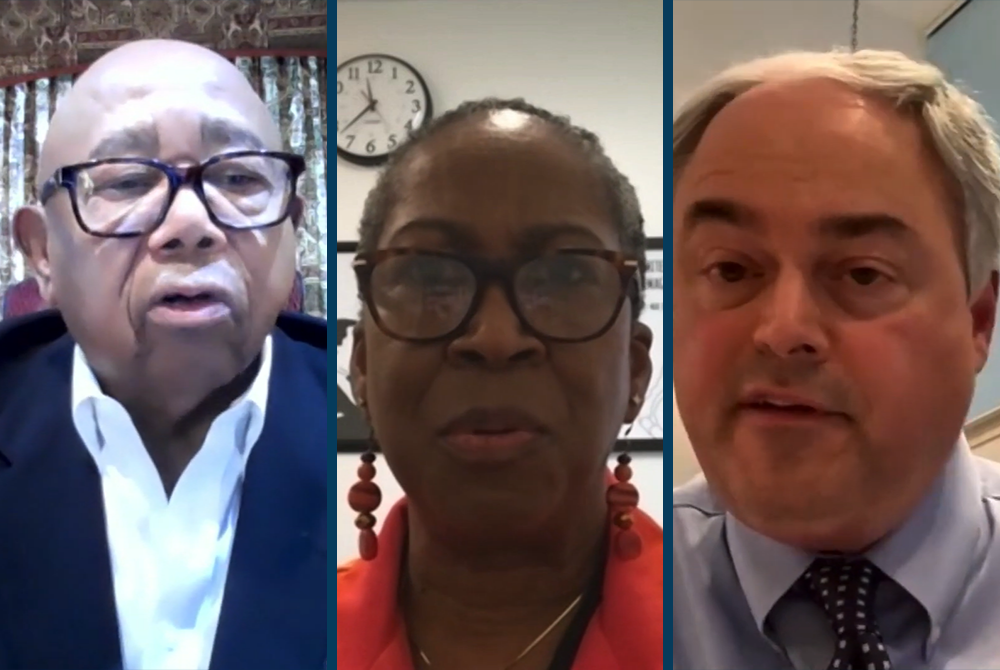 From left: Joseph Stewart, Cheryllyn Branche and Joseph Ferrara were among those who participated in an online panel hosted April 29 by Georgetown University. The panel discussed the deep involvement of the Jesuits and the Catholic Church in slavery, and the Jesuits' efforts to make amends. (NCR screenshots)

An online panel hosted April 29 by Georgetown University discussed the Jesuits' and the Catholic Church's deep involvement in slavery and the Jesuits' efforts to make amends, calling for action to fight racism, but did not directly address critiques raised by some descendants of enslaved people the Jesuits sold to benefit Georgetown.

In March, the Jesuits pledged to raise $100 million to benefit the descendants of the people it enslaved and fund "racial reconciliation" initiatives.

The money will be placed in a foundation called the Descendants Truth & Reconciliation Foundation, currently led by Joseph Stewart, a descendant of an enslaved man named Isaac Hawkins who was one of 272 people Jesuits sold in 1838 to raise money for Georgetown.

The panel included two descendants included in planning the foundation, along with a university official, an alumna of Georgetown who works with Catholic Charities and Jesuit Fr. Tim Kesicki, president of the Jesuit Conference of Canada and the United States.

Cheryllyn Branche, president of the GU272 Descendants Association, said she is the descendant of a baby named Basil Ford whom Jesuits sold in 1838 with his older siblings.

She said hearing the news that she was descended from Ford was "stunning."

"I felt that I had been given a truth that had never been shared with me and that it was necessary to do something with," Branche said.

Joseph Stewart, a descendant and acting president of the foundation, said he wasn't satisfied with the university's decision to rename a building on campus after his enslaved ancestor, Isaac Hawkins.

"The naming of buildings, the building of monuments on campus, are not the positive ways to change society to rid us of this evil that continues to haunt God's one human family," Stewart said. "We can't change it with monuments — we've got to change it by dealing with the roots of slavery that continue to mutate." 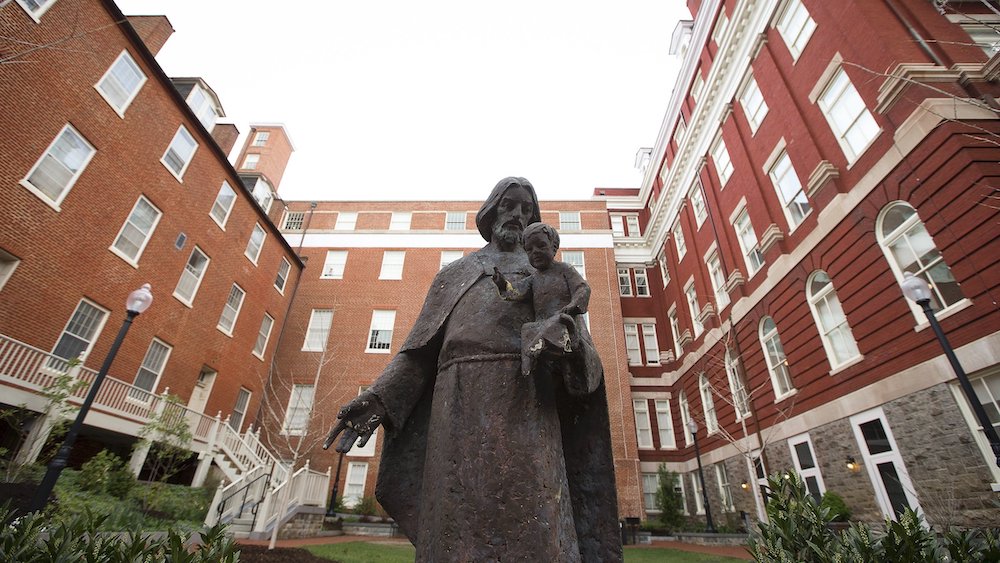 : Isaac Hawkins Hall is seen on the campus of Georgetown University April 4, 2017. The hall, previously known as Mulledy Hall and later Freedom Hall, was renamed in 2017 for one of the 272 enslaved men, women and children sold by Georgetown's Jesuit community to plantation owners in Louisiana in 1838. (CNS/Tyler Orsburn)

In recent weeks, however, other descendants of those 272 people have come forward to critique the scale and use of money raised for the foundation, The New York Times reported, arguing that the decision-making process that led to the foundation's creation excluded most descendants of people enslaved by the Jesuits.

Sandra Green Thomas, former president of the GU272 Descendants Association, spoke at a town hall on April 12 organized by Students for GU272+, a student organization that advocates for the descendants, according to The Hoya, a Georgetown student newspaper. She took issue with a lack of representation of descendants' voices in the deliberations with the Jesuits. According to The New York Times, only three descendant leaders were directly included in creating the foundation.

"The foundation's website states that there are 10,000-plus identified descendants, living or dead, and that the GU272 Descendants Association represents the majority of them," Green Thomas said at the town hall, according to The Hoya. "Let's focus on their claim of representing the majority of living descendants. Quite plainly, this is a lie."

Some descendants who spoke in the town hall also raised concerns about the distribution of the funds, The Hoya reported. About half of the foundation's money will be earmarked for "racial reconciliation" programs, according to The New York Times (a quarter will go towards education for descendants and a smaller amount will support elderly or disabled descendants).

The foundation's website states clearly that the funds are not reparations for descendants.

Green Thomas said during the town hall on April 12 that the funds should be more directly allocated to materially benefit descendants, instead of being given to reconciliation programs that address racism — a problem of the white community, The Hoya reported.

The amount the Jesuits pledged is also far less than the $1 billion descendant leaders had been advocating for, The New York Times reported.

Students and descendants have also criticized Georgetown for failing to implement a referendum the student body passed in 2019 that would collect a $27.20 fee from each student per semester to fund reparations for descendants.

Students supported the referendum by an almost 2-1 margin, according to The Hoya.

As of April, the specific proposals the students voted for had not been implemented, according to The Hoya. Instead, university officials announced a $400,000 annual fund that would support community health, education and other initiatives — rather than being earmarked directly for descendants.

In response to a moderator question about critiques of the university's response to its legacy of slavery, however, Joseph Ferrara, vice president and chief of staff to the president of Georgetown University, did not directly address the questions that have been raised by some descendants and student activists.

Pivoting from the issue, Ferrara said change needs to happen at both a personal and an institutional level. He said learning about the history of slavery can be overwhelming and make it difficult to act.

Responding to a similar question, Stewart said for him, the most important thing was to move decisively.

"We can stand around and argue for another 200 years, or we can act," Stewart said. "And that's what we have done — we have acted."

Stewart and Branche, who grew up Catholic, remembered having to sit in the back of the church with other Black people when they were young due to segregation in Catholic parishes.

He and Branche, along with Kim Mazyck, a Georgetown alumna and senior manager for engagement and educational outreach in the social policy department at Catholic Charities USA, said the legacy of slavery and segregation continues to have ripple effects within and outside the church — in police brutality, economic inequality, food insecurity and other issues.

Stewart said being complacent in the midst of racial injustice is like lying to God. The Catholic Church, he said, is "just as guilty as the Jesuits" when it comes to supporting slavery.

"You cannot say 'I believe' and do nothing about [racism]," Stewart said. "It's time to get up out of those pews."

"You can't be pro-life and not speak out on racism," she said.