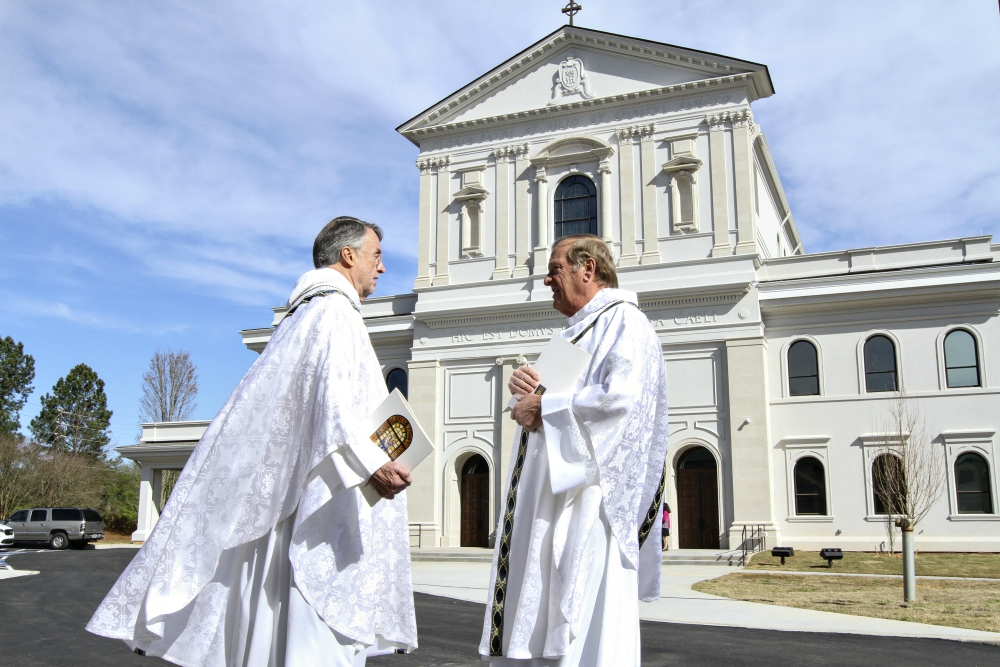 In 2008, Fr. Francis "Butch" Mazur closed and locked the doors of St. Gerard Church in Buffalo, New York, where he served as pastor.

The parishioners who had gathered for the final Mass stood outside the shuttered doors in the streets of downtown Buffalo, staring at the church that, for many of them, had been their home for decades.

"They didn't want to move," Mazur said. "Everyone just stood there blocking the streets."

For more than 100 years, St. Gerard had been a symbol of faith in downtown Buffalo. But as parishioners began moving to the suburbs, there were too few members to sustain the parish.

This spring, artifacts from this parish church have a new home at Mary Our Queen Church in Peachtree Corners, Georgia, dedicated March 17. The parish had been using temporary space for years, which will now be a parish hall and commercial kitchen.

The day before the dedication, Mazur lovingly ran his hand along the gold of the baptismal font that he'd used to celebrate baptisms for nearly a decade. The priest can recite the history of the 100 years of St. Gerard as easily as his own family history. And now, despite more than 900 miles between them, St. Gerard has given new life to Mary Our Queen Church.

During the church's dedication, parishioners craned their heads toward the high, sky-blue ceiling flanked by stained-glass windows that once belonged to St. Gerard.

Archbishop Wilton Gregory, as Atlanta's archbishop (prior to the April 4 announcement of his appointment to the Washington Archdiocese), celebrated the Mass of dedication for Mary Our Queen, joined by its pastor, Fr. Darragh Griffith and former pastor, Fr. David Dye, along with Mazur and several priests of the Atlanta Archdiocese. 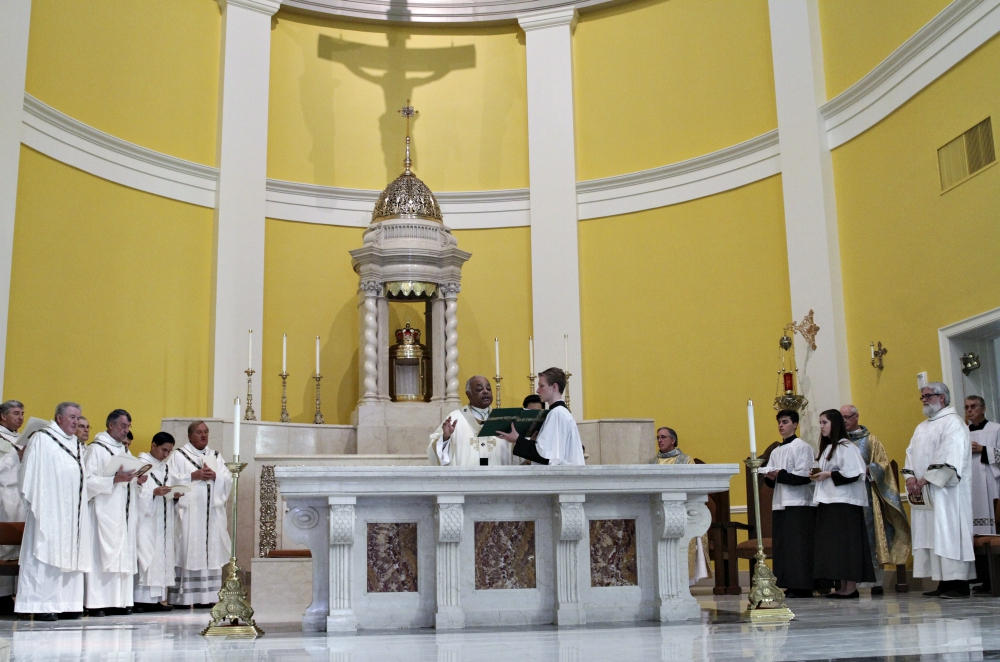 In his homily, the archbishop said that though a new church building is cause for celebration, it is important to remember that those inside the church are called to be God's first temple. He also thanked those from St. Gerard who gave the church a piece of its history and came to see "how Atlanta will care for the treasures that they have decided to share with us."

"Please take home to the Diocese of Buffalo the gratitude of this whole community, and the assurance that they will cherish — as you cherished — the treasures of religious art and artifacts that once lived in the cold Buffalo region and now will sweat with us here in Atlanta."

Jeff Armbruster, a Mary Our Queen parishioner for more than 20 years, is one of many parishioners involved in the project of moving artifacts from the beginning, when the plan was originally to bring the entire St. Gerard Church to Peachtree Corners — stone by stone.

When the cost was determined to be too great, they chose to go with the next best option — bringing inspiration and artifacts from the altar to the tabernacle, a representation of the pietà and the statue of the Sacred Heart of Jesus. The many elements from the Buffalo church are intermingled with features such as the Stations of the Cross, a Holy Family statue, and the crucifix and corpus from the temporary Mary Our Queen Church.

Dye first visited St. Gerard not long after it closed and instinctively knew that the church was the right choice for the new Mary Our Queen — the large fresco above the altar that depicted Mary's coronation was an extra confirmation. Later, Armbruster was able to visit St. Gerard while on vacation with his family and was inspired by the design.

Mary Margaret Thomas, who served on the church's interior committee, said the new church is "a perfect blend of the modern and classical."

"When I walk in, I'm just in awe. I'm so excited for our parish and for the Catholic community to have this special space," she told The Georgia Bulletin, Atlanta's archdiocesan newspaper. "It just envelops you in warmth from the moment you walk in the door."

Also walking through the church doors in awe were members of the Ciezki family — 90-year-old Dick, his wife, Dorothy, daughter-in-law, Frankie, and son, Robb, who served as a deacon during the dedication Mass.

Frankie Ciezki, with tears in her eyes, showed a photo of she and her husband on their wedding day, standing in the expanse of St. Gerard Church.

"I made every sacrament besides my baptism at St. Gerard. There was a beautiful spirit there. But it was the people who made the church so special," she said. "You really feel that same spirit here, too. I believe there was a reason this church was chosen to receive so much of St. Gerard. Not just any people, but these people. There's a connection of that same special spirit."

Dick Ciezki said walking into Mary Our Queen was "just like being back home." As the final trustee of St. Gerard, Ciezki said it was difficult to say goodbye to the parish he called home for more than 30 years.

"I signed the paperwork that St. Gerard was closed," he said. "I was there when we closed the doors. And here we are today. Isn't that just wonderful?"

[Anderson Redding writes for The Georgia Bulletin, newspaper of the Atlanta Archdiocese.]