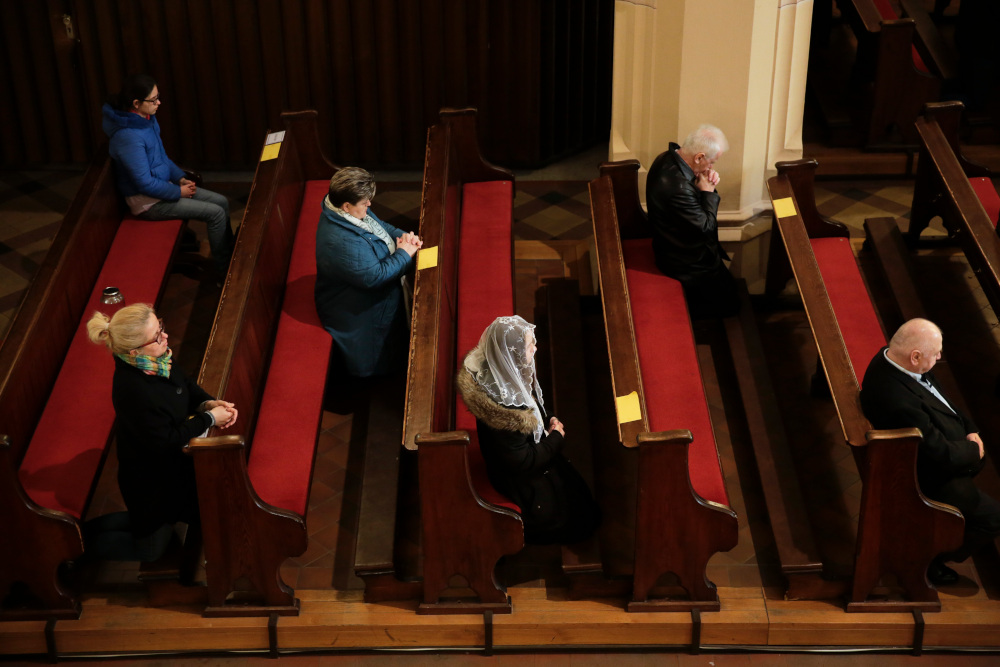 Believers sit far apart from each other inside the catholic St. Afra church as they wait for the delivering of the Holy Communion in Berlin, Germany, Sunday, April 5, 2020. (AP/Markus Schreiber)

Germany's Catholic bishops will resume discussions this week to plan the Synodal Path, a set of conferences slated to address controversial questions such as women's roles and LGBTQ acceptance, even as the country faces yet another scandal of sexual abuse by clergy.

Many churchmen believe that the social questions and the abuse crisis are related. "The abuse crisis hurts the church very deeply," Fr. Martin Maier, a Jesuit priest and former editor at the German Catholic magazine Voices of the Time (Stimmen der Zeit), told Religion News Service. "One of the most painful consequences is the loss of trust. One of the goals of the Synodal Path is to restore trust, which is crucial and vital."

Started in 2019 and scheduled to last two years, Synodal Path was put on hold in September 2020 as a result of the COVID-19 pandemic. Its purpose is to debate questions of power structures in the Catholic Church, priestly life, sexual morality and the role of women in the church.

While the bishops' summit officially considers only Germany's local dioceses and parishes, the discussions and decisions will likely have consequences around the global church. Bishops from Australia to South America and Ireland are grappling with the devastating impact that the sexual abuse crisis has had, as well as with mounting secularization that has depleted church attendance and vocations.

On Jan. 31, Pope Francis urged the Catholic Church in Italy to call its own national synod, in line with his longterm advocacy of "sinodality" — by which he means a more decentralized and subsidiary approach to decision-making and power structures.

In Germany, researchers analyzed the response to clergy sexual abuse cases in 27 dioceses in the country from 1946 to 2014. Their 2018 report, known as the Mannheim, Heidelberg, and Gießen study, or MHG, found that more than 4% of clergy allegedly committed sexual abuse and counted 3,677 minors as alleged victims.

The MHG report pointed to systemic issues underlying the sexual abuse crisis in the Catholic Church, namely excessive power awarded to clergy and problems regarding how priests are taught.

"It's not only the pandemic, but the disastrous situation of our church and how we deal with the scandal of sexual abuse that makes people really run away," said Claudia Lücking-Michel, a theologian and former member of Germany's parliament who has taken an active role in the Synodal Path, in a Zoom interview with Religion News Service on Jan. 27.

A faithful Catholic and a lay representative to the Synodal Path's forum on power structures in the German church, Lücking hopes the summit will bring reform and restore credibility in the Catholic Church.

According to the German Catholic news outlet KNA, the more than 200,000 people who left the Catholic Church between 2018-2019 were motivated primarily by the sexual abuse scandals.

To make matters worse, a sexual abuse case in the diocese of Cologne, Germany, has reopened old wounds and underlined the existing issues with the church's accountability and transparency on sexual abuse. 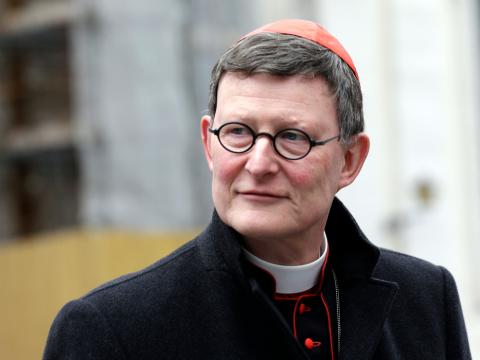 Cardinal Rainer Maria Woelki arrives for a meeting at the Vatican on 8th March, 2013. (AP/Alessandra Tarantino)

Cardinal Rainer Maria Woelki, Archbishop of the Archdiocese of Cologne and a staunch critic of the Synodal Path, has been asked to step down after refusing to share the contents of a report completed last year detailing his diocese's track record on sexual abuse.

In public remarks on Christmas Eve, the cardinal offered an ill-worded apology that had many journalists and victims enraged. He claims that the report failed to act independently and underlined the importance of protecting the identity of the victims.

The situation has wreaked havoc in Cologne, the country's largest diocese, and led to the resignation of two members of the victim's advisory board. In an effort to restore trust, German bishops agreed to raise the amount of reparations for victims, normally $5,000, to $60,000 per case.

"The way the Cologne diocese dealt with the result of the research shows that they can't be trusted, that it's not transparent," Lücking said, adding that the chairpersons of the Synodal Path will likely address the issue directly in the next online gathering.

The German bishops have been discussing the need for more lay involvement in the church, believing clerical control to be at the root of clergy sexual abuse.

Coincidentally, while the pandemic has posed serious challenges for the German church, it has also opened possibilities for lay men and women to take the lead. "Now there are so few official services and Eucharists that people have started to organize themselves," Lücking said, pointing to the restrictions on religious gatherings imposed at the height of the pandemic.

"I could never have imagined this before. There are women leading services, they are preaching, they are doing what they can," she said.

The question of women's involvement in the church is a key issue for the Synodal Path, as the German bishops have long led the charge in addressing the theological issues impeding female ordinations. Limburg Bishop Georg Bätzing, the president of the German Bishops' Conference who is heading up the Synodal Path, recently said that arguments against the ordination of women "are becoming less and less convincing."

According to Lücking, German women who have lived for 15 years under the country's leader, Chancellor Angela Merkel, will not stand for a church that doesn't provide equality for women. "In the church they dare to say you are not allowed to be ordained just because you are a woman," said Lücking. "That kind of talk is not going to win."

"Either they change, or the women will go," she said.

Bätzing, in his interview with German magazine Herder Korrespondenz, forwarded the possibility of blessing the marriages of those who can't be married in church, including LGBTQ individuals.

Lücking believes that the church can't afford to "lose any more time" in making changes.

"How can I be a democrat Monday through Friday while Saturday and Sunday I am an obedient Catholic who has forgotten that in the outside world there are different structures for organizing power in the society and community?" Lücking asked.

The Catholic Church in Germany is among the wealthiest in the world, largely due to a religion tax that allows citizens to set aside tax payments for their professed faith. This allows the German Church to fund numerous scholarships, charitable efforts and other organizations, making it among the top employers in the country.

It has also fostered top-notch education for clergy members and laypeople, making German theologians among the most well respected in the church.

"It's a matter of fact that theology in Germany has a special status in the universities," Maier said. "This may explain partly why German theology is respected and also in some way influential beyond Germany."

While Pope Francis promotes a synodal approach in church affairs, the Holy See is also concerned with maintaining unity.

In a letter to German Catholics in 2019, the pope called for patience in addressing the topics raised by the Synodal Path, warning against the temptation to look for "immediate results that generate quick and immediate consequences."

Maier said that some of the main doubts regarding the Synodal Path come from the Vatican's Congregation for Bishops. "The fear of some people, and this seems to be a matter of fact in the Vatican, is that the authority of the bishops may be questioned and limited," he said.

For this reason, he added, it's important that the German church continue its dialogue with the different powers in the Vatican. The next global synod of bishops, scheduled for 2022, is supposed to focus on the notion of synodality. According to Maier, the German effort could act as a model.

Shrugging off the idea of schism, Maier said that the current crises in society, health care and the environment make for a decisive moment in which the church can address its issues and offer a valuable contribution to address these modern challenges.

"If I could make a recommendation for the Synodal Path, [it] is to not forget about this bigger picture and not to think that the center of the church is Germany. It's not Germany or the Vatican," he said.