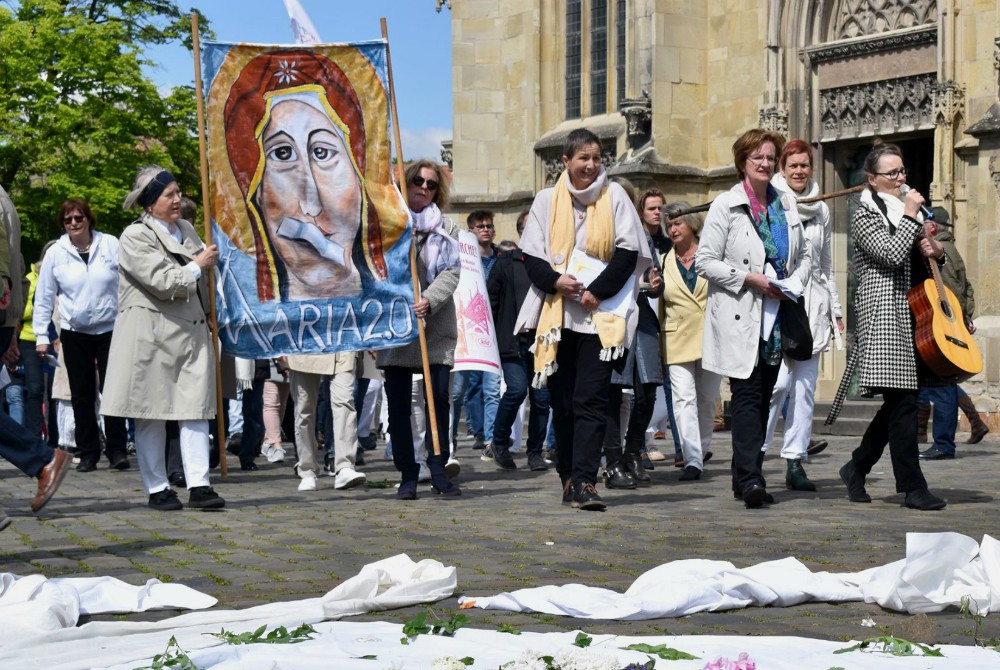 People in the Maria 2.0 movement protest outside Holy Cross Church in Münster, Germany, in May. (Ruth Koch)

There's growing dissatisfaction with the Catholic Church in Germany, as the church there begins a "synodal path" aimed at renewal.

More than 200,000 Catholics left the church in 2018, according to the German Bishops' Conference. This plunge in numbers continues a yearslong trend.

"The current statistics are worrying," Jesuit Fr. Hans Langendörfer, secretary of the German Bishops Conference, said in a statement. "There is nothing to gloss over about the numbers. They confirm a trend that has shaped the church in recent years."

"If these massive departures continue at this rate, a minority of Germans will be churchgoers in five to 10 years," said Philipp Gessler, a former religion editor at Deutschlandfunk, Germany's national public radio. For the first time in 1,000 years, the majority of Germans will have no religion at all, he said.

Growing secularization is eroding membership in both Catholic and Protestant churches. Currently, there are approximately 23 million Catholics and 21 million Protestants in Germany, which has a population of 83 million.

Contributing to the declining numbers in Germany's Catholic Church is its failure to address sexual abuse, with abusive priests escaping punishment in 60% of cases. According to Deutsche Welle, Germany's international broadcaster, failure to deal with the fallout from the most recently discovered national sex abuse scandals since 2010 may be contributing to growing alienation.

Over the past decades, more than 1,600 priests committed tens of thousands of offenses against thousands of victims. These abuses were hushed up and ignored until a German Bishops' Conference study in 2018 revealed the magnitude of the scandal.

But the momentum for real change — the loudest voice for a transformation of the church — comes from Catholic women who are no longer willing to accept a subordinate role in a male-dominated church.

"The grief that women had to endure through the power of churchmen was too great, and the hope for real change was too small," said Mechthild Heil in an email, noting that many women have turned their backs on the Church. Heil is the leader of the Catholic Women's Association in Germany and a member of Chancellor Angela Merkel's Christian Democratic Union Party in the Bundestag.

Heil is calling for full equality between women and men, and women's access to all ministries in the church. "This includes all ordained ministries and governing ministries," she said.

This disaffection of women was underscored last May when the grassroots Catholic women's movement Maria 2.0 held its own services, without priests, outside Catholic churches in 50 cities and towns in Germany. From May 11 until May 18, participating women did not enter churches or perform volunteer work in their parishes in order to make known how empty the churches are without women.

Ruth Koch, a leader of Maria 2.0, called on the Vatican to open the priesthood to women and to drop the celibacy requirement for priests. In a telephone interview from her home in Munster in northwestern Germany, Koch explained that the movement chose the name Mary (Maria in German) because she is the most important woman in the Bible. The term 2.0 refers to a new and modern version.

"We need a new way to look at Catholic women in the Catholic Church and update the women's image," said Koch.

An image on the movement's website depicts the Virgin Mary with tape across her mouth, reduced to silence.

"Jesus treated all people the same and the clerical church should look at his view and go back to that," said Koch.

"We want to make known the great longing that women are as worthy as men and they have to be treated as the same," she said, adding, "The Catholic Church does not do that."

In an open letter to Pope Francis last spring, addressed to the Holy Father and signed by more than 34,000 of the movement's followers, Maria 2.0 expressed its mourning over all the known and unknown cases of abuse in the Roman Catholic Church and absence of plausible apologies and aid to victims. It called upon the church to:

Fr. Stefan Jürgens, who served as a priest in Koch's Holy Cross Parish in Münster, said he is happy about the emergence of Maria 2.0. "Their founders are very spiritual ... and they are standing up for the Gospel very credibly," he said.

Progress for Catholic women has been slow because of glaring divisions among the bishops, said Jesuit Fr. Klaus Mertes. According to Mertes, there is a large group among the 69 bishops that have strong links to the Vatican and that adamantly oppose the ordination of women. Even talk of such a change is taboo. At the same time, Mertes is encouraged by the rising voices of more liberal bishops, such as Bishop Gerhard Feige of Magdeburg in eastern Germany, who has indicated that he is no longer convinced by the arguments against women's ordination.

Mertes believes the Maria 2.0 movement is playing an important role in promoting expanded participation of women in the life of the Church. Mertes was one of nine signatories to an open letter to Munich Cardinal Reinhard Marx published in February in the Frankfurter Allgemeine newspaper, calling called for the priestly ordination of women and an end to mandatory priestly celibacy.

Matthias Kopp, director of communications and spokesman for the German Bishops' Conference, said the conference decided at its 2019 spring plenary assembly to embark on a synodal path together with the Central Committee of German Catholics. 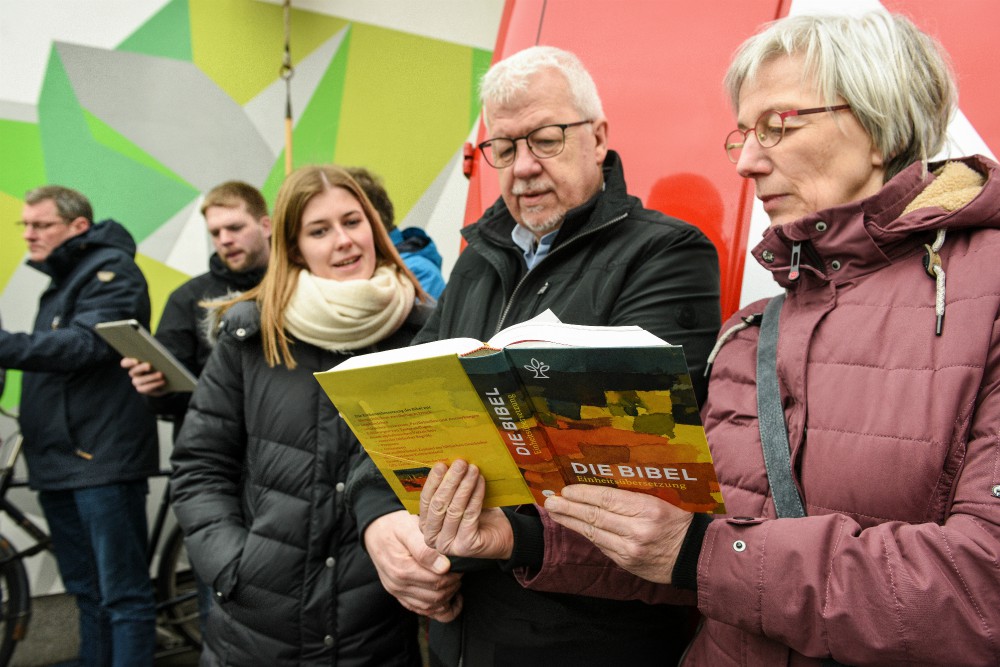 According to Kopp, a synodal path is distinguished from a synod, which is defined in canon law, requires the approval of the Holy See and entails a lengthy process. A synodal path, by contrast, initiates a concentrated debate on the current challenges and "makes it possible to discover an 'extended horizon' that opens up new spaces in which innovative action can be taken."

But German Catholic women expect little change to emerge from the synodal path and the roundtable discussions, which began in Munich Dec. 1 with a candle lighting and special Mass. The first meeting of the synodal assembly will take place in Frankfurt on Jan. 30, 2020.

"The December bishops' conference is a kind of 'road show' to give people the illusion the church in Germany can change," Christiane Florin, religion editor for Deutschlandfunk, said in a telephone interview. "Most of these same people said in 2010 they were ignorant of what was going on with sexual abuse in the church. And now, in 2019, they say we must talk seriously about change. I find what they say now is not credible."

Kopp defends the synodal path as a way of change, quoting Cardinal Marx: "Faith can only grow and deepen if one becomes free from thinking blockades, if one faces up to the free and open debate and develops the ability to take new positions and to go new ways."

Critics argue that since the bishops cannot be outvoted, real change cannot be achieved. While seeing the binding nature of the findings of the synodal path as the responsibility of all those officially involved in it, Kopp acknowledged that the Apostolic See decides on the implementation of decisions of universal church relevance and, therefore, the German church cannot make its own rules in matters that affect the universal church.

"There is no 'German special way' separated from Rome," he said.

The four synodal path forums are:

According to Kopp, the demands of Maria 2.0 that women play an expanded and equal role in the church is a matter of universal church relevance that cannot be decided by the German church.

"But we can reflect and discuss the topic," he says.

Maria 2.0, wanting to maintain its independence, does not plan to participate in the synodal path discussions.

"In my point of view, Maria 2.0 is a very important initiative. It's kind of prophetic work they are doing," said Gessler of Deutschlandfunk. "Because we don't know how God works in the end. I think that one day there will be women priests in the Catholic Church — it may not be in my lifetime. And then we can look back to groups like Maria 2.0, that these brave women have fought for this goal and now we have reached it."

Koch said she remains a committed Catholic, despite the church's male-dominated structure.

"It is necessary to stay and be persistent in demanding changes because the 'house of church' is in a very bad, battered and obsolete state, but it is our home," she explained. "And if your home is dirty and needs renovation and fresh air, you would not just move, but you start dusting, cleaning up and opening windows to let in sunshine and fresh air."