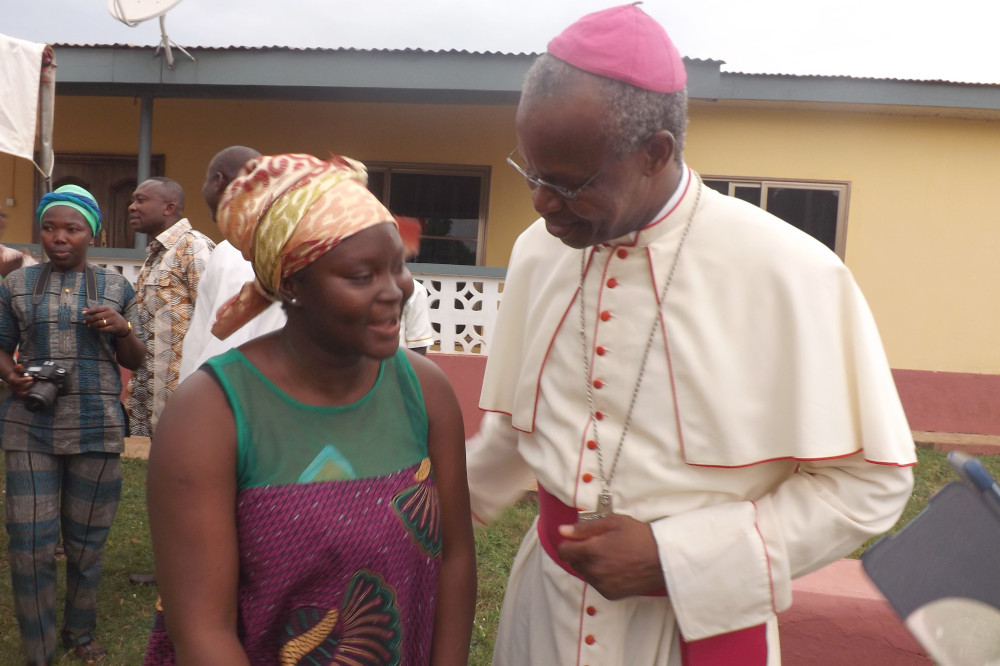 Cardinal Richard Kuuia Baawobr of Wa, Ghana, pictured chatting with a woman in this file photo, died in Rome Nov. 27, 2022, at the age of 63. (CNS photo/Damian Avevor)

Cardinal Richard Kuuia Baawobr of Wa, Ghana, died in Rome Nov. 27 at the age of 63.

He had been recovering in Rome hospitals since he underwent heart surgery in September and had just been discharged from Rome's Gemelli hospital Nov. 18.

Fr. André-Léon Simonart, secretary general of the Missionaries of Africa -- of which the cardinal was a member -- announced the cardinal had been taken from the generalate to the hospital by ambulance early in the evening Nov. 27.

"We received the sad news" that the cardinal died just a short time later, he wrote in the communique.

Elected president of the Symposium of Episcopal Conferences of Africa and Madagascar in July, Baawobr was the leading voice for the association of bishops across the continent and nearby islands.

The cardinal "was truly a broadminded pastor, a person with great empathy and, above all, a man of God. The entire Africa, the islands and, indeed, the universal church have lost a great and devout churchman, a selfless servant," wrote Ambongo Besungu, archbishop of Kinshasa, Congo.

Baawobr was an expert in interreligious dialogue, particularly in promoting understanding between Christians and Muslims, and he was greatly involved in ecumenical dialogue and cooperation with other Christian churches.

Born June 21, 1959, in Tom-Zendagangn, he joined the Missionaries of Africa in 1981 and was ordained a priest in 1987. He pursued his studies in Fribourg, Switzerland, and London, and studied Scripture at the Pontifical Biblical Institute in Rome.

In 2004, he was elected assistant to the superior general of the order in Rome, where he worked for six years before being elected in 2010 to a six-year term as superior of the order. As superior, he also was vice chancellor of the Pontifical Institute for Arabic and Islamic Studies in Rome from 2010 to 2016. The men's Union of Superior Generals elected him a member of the Synod of Bishops on the family in 2015.

When his term as superior general ended, Pope Francis appointed him to lead the Diocese of Wa, where he had been promoting greater public awareness about mental illnesses and outreach by laity and experts to help provide care to those with mental illness who live on the street.

Francis announced May 29 that the bishop would be one of the 21 prelates he would make a cardinal at a ceremony in Rome Aug. 27.

Shortly after arriving in Rome to attend the ceremony, the Ghanaian was hospitalized after feeling unwell.

He was created a cardinal despite his absence from the consistory, and Francis led everyone in prayer at the end of his homily "for this brother who ought to have been here and is hospitalized."

His death leaves the College of Cardinals with 225 members, 126 of whom are under the age of 80 and eligible to vote in a conclave.