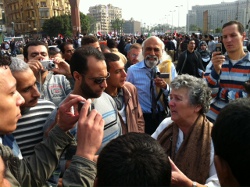 By the time we got to downtown Cairo on Nov. 14, Tahrir Square was already an undulating school of people. The crowds swayed back and forth across the roads, stepping over people still wrapped in blankets sleeping on the cement. Like any Fourth of July program in our own parks, a group was banging together the skeleton of a speaker's platform and small groups were already beginning to unwrap the sandwiches they'd brought with them for the day.
{C}
This was post-revolution -- maybe better to say mid-revolution

The visit to Tahrir Square on Nov. 19 was the end of a five-day dialogue on Universal Human Rights hosted by GPIW, The Global Peace Initiative of Women, which was inclusive of men as well as women civil rights activists, sociologists, anthropologists, religious figures and young leaders. For days, we had heard about Jan. 25, the great day of revolution 10 months ago. Today we would have an opportunity to judge its character and tone.

Read more on Joan Chittister's blog, From Where I Stand.

Editorial: Can Guatemala overcome the drag of the past?