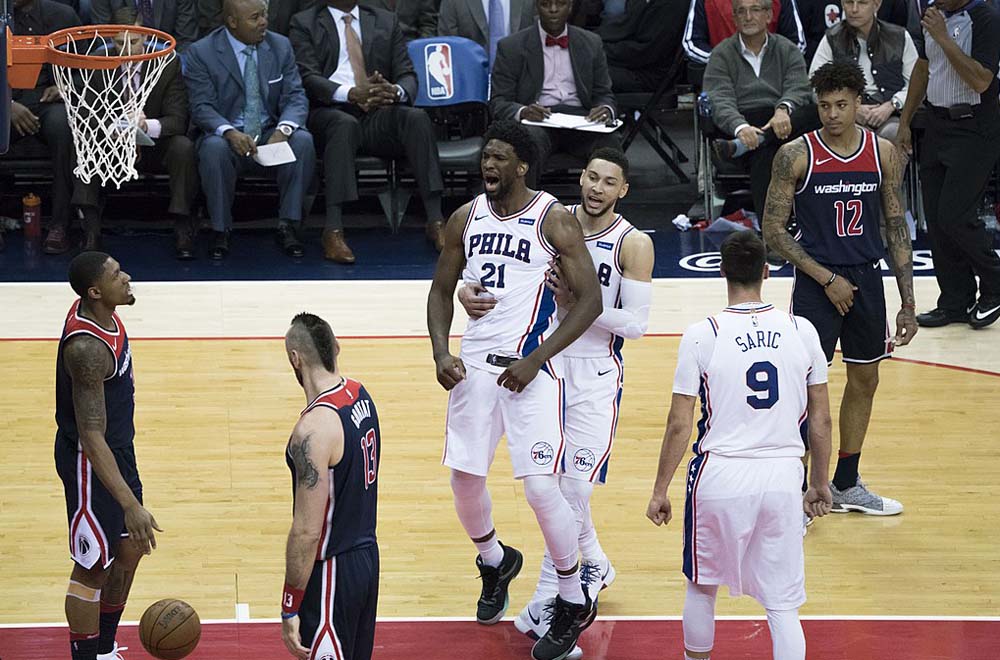 Joel Embiid, center, during an NBA game between the Philadelphia 76ers and the Washington Wizards, Feb. 25 in Washington. (Flickr/Keith Allison, CC-2.0)

On a Saturday two years ago, I wore my Philadelphia 76ers hat on a trip to a local liquor superstore. The team was in the middle of one of the worst seasons in NBA history, which they started with 26 consecutive losses and ended with a record of 10-72. It was a lot harder to find Sixers gear being worn in public than Eagles, Phillies, or Flyers stuff in this sports-obsessed region, so when I walked past a couple leaving the store wearing their own matching Sixers caps on my way in, I couldn't help myself.

"Trust the process!" I half-shouted at them, a 76ers rallying cry born out of the depths of the losing streak.

The woman gave me a little, confused smile, and the guy didn't seem to hear. I sped past them, embarrassed at my awkward attempt at social interaction, and kept going until I reached the beer fridge at the back of the enormous warehouse.

A full minute later, out of the blue, somebody grabbed my arm. I turned around, and it was the guy with the hat. He took my hand and started to shake it.

"I'm so sorry I missed that, man," he said. "Trust the process." I stammered something back, in total shock. We kept shaking for another second, and then he was gone — a process-trusting basketball angel. I still think about this story often, emblematic of the weird, nerdy, passionate community (or, maybe more accurately, cult) that has grown around the 76ers over the past five years.

Our origin story in a nutshell: Plenty of pro basketball teams are bad, but the Sixers were bad on purpose. When general manager Sam Hinkie was hired to run the team in 2013, the 76ers were stuck in a prolonged period of mediocrity, the odds of winning a league championship with their then-roster essentially nonexistent. To win in the NBA, you need a transcendent star, or even two or three. (Think Michael Jordan and Scottie Pippen, LeBron James and Kyrie Irving, Steph Curry and Kevin Durant.)

And the best way for a not-great team to acquire stars is to find them in the amateur player draft, during which the worst teams pick near the top. Hinkie sold the team owners on an audacious idea: Trade all the players with any value for future draft picks, play a rotating cast of dozens of marginal talents for a few seasons with the hopes of finding one or two who could hang on the roster going forward, and use the high draft picks to stock up on potential stars. Stick with the plan and the team would have a decent chance to turn into something special. Don't focus on the losing results right now, even if it takes two or three or four seasons. Instead, "Trust the Process" to get you where you want to go.

As this was happening, a community of Hinkie-ites was growing, primarily made up of young men who found each other on Twitter, Reddit, and Instagram, and liked the general manager's analytic approach, believing in the future success he envisioned. If Hinkie was the savior figure at the center of the story, then his most ardent apostles were the co-hosts of a popular Sixers podcast called "The Rights to Ricky Sanchez," Michael Levin and Spike Eskin, who beat the drumbeat of the Process on their weekly show as the losses continued to mount.

While some podcasters covering better teams might throw a game watch party during the playoffs, say, Levin and Eskin have hosted a series of Draft Lottery parties instead, gathering hundreds and hundreds of devotees at bars to watch TVs as an NBA bureaucrat announces the upcoming draft's order.

When the Sixers were announced as winners of the first overall pick in the 2016 draft, the reaction of the Process-trusters at the official lottery party was as jubilant as any I've ever seen in response to an actual sporting event. It was truly beautiful. We were losing at historic rates but we were having so much fun. (Don't forget the road trips, cat meme, surreptitious graffiti, and the fact that franchise player Joel Embiid nicknamed himself "The Process.")

The Process ruffled the feathers of traditionalists, who found such intentionally bad roster construction unsporting. Even the commissioner of the league and the owners of the team grew restless, eventually forcing Hinkie out before he could see his plan through to completion. (I have a T-shirt with the phrase "In Memoriam" and a picture of a Roman-style bust of Hinkie's head with the dates of his tenure with the team — 2013-2016 — etched below.)

But thanks to Hinkie's work, the 76ers wound up drafting Embiid and Ben Simmons, two generational talents who have fought through injury problems to lead this year's team to a regular season record of 52 wins and 30 losses and a first-round playoff series win over the Miami Heat. "Trust the Process" chants rain down from the rafters of the Sixers' home arena. Their season is most likely nearing its end, as they face a 3-1 deficit to the Boston Celtics in a best-of-seven series, but they have come so far, so fast. Few teams in the league are set up as well for the future as the Sixers are. I can't wait to see what comes next.

I didn't grow up a 76ers fan. I'm from the New York half of New Jersey, and when the Nets left the Garden State for Brooklyn in 2010, I floated for a while. When I relocated to the Philly suburbs in South Jersey after grad school, I quickly fell for the underappreciated Sixers, even though they weren't going to be winning titles anytime soon. They were decent and had a fun bench unit.

Then Hinkie arrived and blew it all up, cutting my favorite players Thaddeus Young and Lou Williams loose. But his argument convinced me, and I went all-in. I spend more time reading and talking about the Sixers than I do about any of my other, more successful, longer-standing favorite teams. Part of this is certainly due to Hinkie and the haven for sports nerds I found in the Process world, but I feel like a lurking interloper in this online community, more consumer than sharer.

I think the more important contributing factor to my obsession is that the Sixers are the only local team I follow. I go to games in person and talk about the team with acquaintances between games of pickup basketball at the high school down the street from our house. The Atlantic's Derek Thompson wrote a great piece recently in praise of fair-weather fans, and part of his argument is that it's so easy today to use streaming platforms and social media to follow far-flung teams from all over the country. This is undoubtedly true.

But, speaking from experience, there is nothing better than looking out for other Sixers fans at the farmer's market or liquor store, and sharing a moment of genuine human connection with them because you both know the Process is right and the Process is just.

[Mike Jordan Laskey is the director of Life & Justice Ministries for the Diocese of Camden, New Jersey. He blogs for the Camden Diocese at camdenlifejustice.wordpress.com. Sign up for email updates for future articles in the series, The Gospel of Sports.]