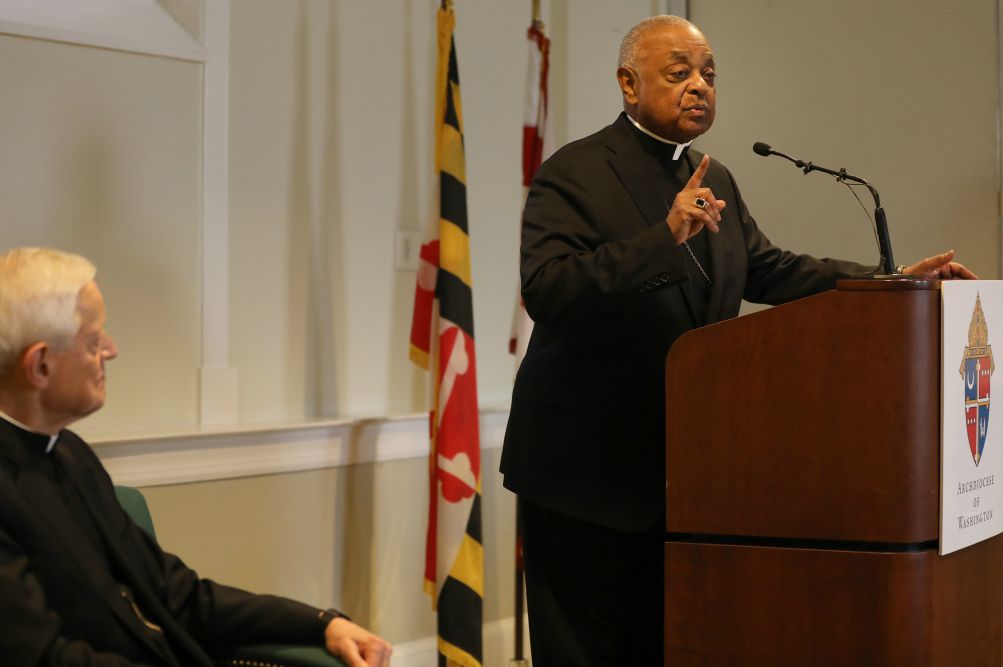 Cardinal Donald Wuerl, retired archbishop of Washington, who has been apostolic administrator of the archdiocese, looks on as Archbishop Wilton Gregory speaks during a news conference in the pastoral center at the Archdiocese of Washington April 4, after Pope Francis named him to head the archdiocese. (CNS/Bob Roller)

In what he termed "a moment fraught with challenges," the new leader of the Archdiocese of Washington, in his first public appearance here April 4, repeatedly pledged to be honest with his flock.

"I believe that the only way I can serve the local archdiocese is by telling you the truth," said Archbishop Wilton Gregory, who will become the seventh archbishop of Washington. He repeated the claim several times during a 45-minute news conference in which he also answered questions about the effects of clericalism, the need for transparency in the church, the need to address mistakes of his predecessors, and how he intends to relate to the city's political scene.

Gregory, 71, currently the archbishop of Atlanta, will be installed in Washington, D.C., on May 21.

"This is obviously a moment fraught with challenges throughout our entire Catholic Church, but nowhere more so than in this local faith community," he said in prepared remarks, making a reference to the turmoil that has roiled the archdiocese during the past year.

His immediate predecessor, Cardinal Donald Wuerl, who introduced Gregory, resigned in October after a Pennsylvania grand jury report raised questions about his handling of abusive priests in the 1990s while bishop of Pittsburgh. Wuerl's predecessor in Washington, Theodore McCarrick, was removed from the priesthood after revelations he sexually abused a youngster and sexually harassed seminarians.

"I would be naive not to acknowledge the unique task that awaits us," Gregory said in his remarks. He spoke of his confidence in the grace of God and the goodness of the people of the church as aids in facing his new responsibilities. "I want to come to know you, to hear your stories, to listen to the emotions and experiences and expectations that have shaped your precious Catholic faith, for better or for worse. I want to offer you hope."

He characterized his new archdiocese, its ethnic and social diversity. In a compact line that spoke of both the material and spiritual richness and poverty of its people, he said: "The Archdiocese of Washington is home to the poor and the powerful, neither of which realizes they are both." 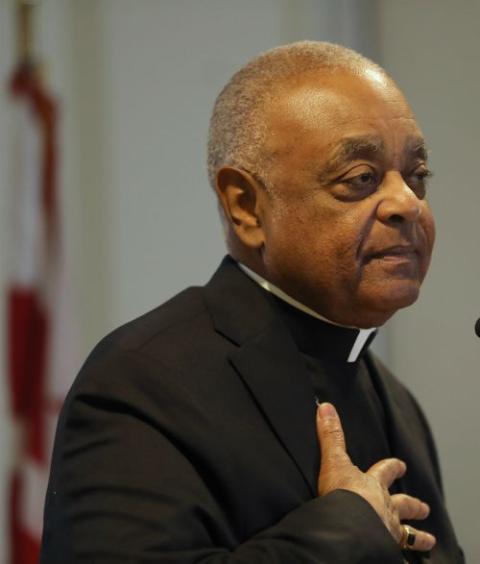 In addition to offering hope, he promised: "I will rebuild your trust. I cannot undo the past, but I sincerely believe that together, we will not merely address the moments where we have fallen short or failed outright, but we will model for all the life and teachings of our Lord Jesus Christ, and we will reclaim the future." The archdiocese, he said, will move forward, "neither forgetting the past nor being constrained by it."

Asked about the role of what has been described as clerical or hierarchical culture in the sex abuse crisis, he recounted a scene from early in his priesthood in Chicago. He had been appointed to study in Rome and had just purchased a trunk in a store on Wabash Avenue when he met an older priest, whom he had long admired, who warned him of three temptations he would face in Rome: "He said, 'You will face the temptation for self-aggrandizement, the temptation for pleasure, and the temptation to power. And the most damaging and seductive temptation is that for power.'

"And I think so much of what we're facing now was a misuse of power, an abuse of power, clerical power, power that was intended in too many cases to dominate and destroy lives."

Perhaps the most candid moment of the exchange with the media came when asked whether he would address the misdeeds of his predecessors.

"It's difficult to come into a situation where there is unrest. I've known Donald Wuerl for over 40 years," Gregory said. "I know he is a gentleman. He works very hard for the church. He's acknowledged that he's made mistakes. That's a sign of the integrity of the man.

"If I can shed light on what I think we need to do in response to some of the mistakes he's acknowledged and asked forgiveness for, I'll do that. Part of clericalism is circling the wagons so that the episcopacy won't call one another to task. I think this moment has shown the folly of that approach to episcopal governance and episcopal collegiality."

Asked about transparency in the church, he repeated, "I will always tell you the truth."

Illustrating his promise, he recounted a scene during the 2001-2004 period when he was president of the United States Conference of Catholic Bishops and leading the bishops to confront the growing sex abuse scandal. He said he met with Pope John Paul II and spoke candidly with him.

"I can remember on one occasion telling him what I had discovered" about the sexual abuse of young people, he said. "And he said, 'Are you sure?' And I said, 'Holy Father, I am sure, and there is more.' So I walked away from my time as president knowing this one thing: that I told them the truth as I knew it. And that's what I will do for the Archdiocese of Washington."

Asked how he intended to relate to the political power structure in Washington, he replied: "I see this appointment as an appointment to be the pastor of the Archdiocese of Washington. I was not elected to Congress," he said. "The pastor must speak of those things that are rooted in the Gospel, but I'm not going to be at any negotiating tables. That's not my place. My place is in the pews with the people."

He said, when asked what message he had for people who had left the church, "Well, we've certainly given our faithful lots of reasons to leave the church. I want to provide a few reasons to stay. I want to assure the people that I will be honest with them."

In his final response, he described himself as "an ordinary human being" who will not always handle matters perfectly.

A version of this story appeared in the April 19-May 2, 2019 print issue under the headline: Pope names Gregory as Washington archbishop.