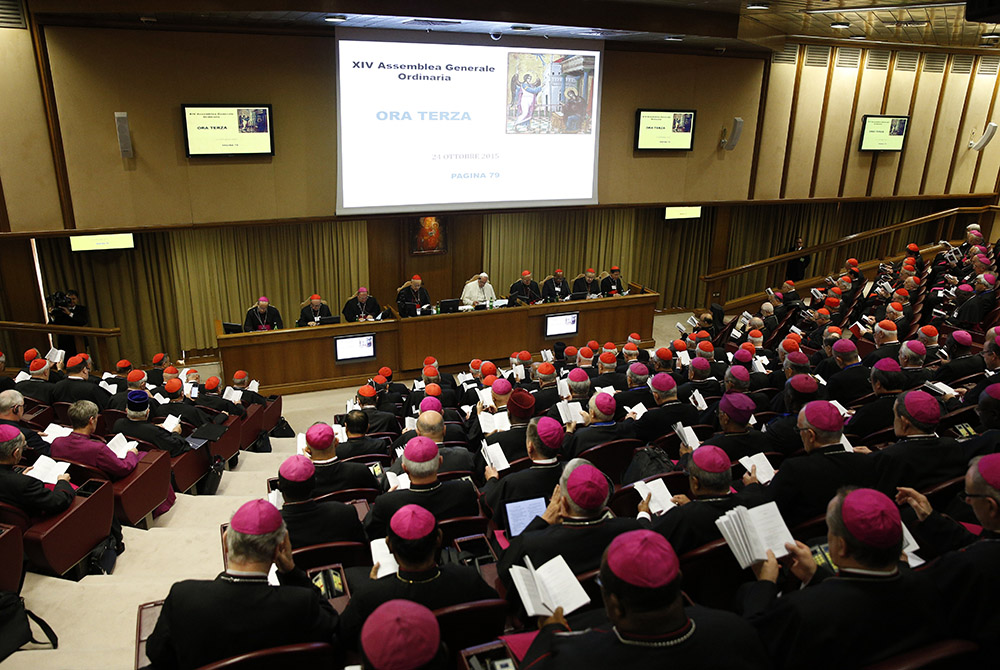 Pope Francis presides at the morning session of the Synod of Bishops on the family in 2015 at the Vatican. The concept of "synodality," originally applied to bishops meeting together to discuss church teaching, has become increasingly important and extended since the Second Vatican Council. (CNS/Paul Haring)

Pope Francis' push for synodality inside the Church coincides chronologically with the rise of populist leaders and the crisis of democracy on the outside.

Synodality, therefore, has an ad extra dimension. It is an ecclesial response to populist leaders who "hijack" religion by sowing division and exploiting the anger of those who feel excluded, as Vatican Cardinal Luis Antonio Tagle noted recently.

Of course, synodality has specific ad intra dimensions, too.

In an interesting article published a few months ago in Vida Nueva, Spanish Jesuit Alejandro Labajos pointed out that, according to the Congregation for Institutes of Consecrated Life and Societies of Apostolic Life, four percent of these religious communities had undergone an apostolic visitation (basically a Vatican investigation).

Such visitations are made to look into reports of abuse or serious problems with faith and discipline.

Labajos summarized the root problem of the abuse of power in Catholic communities in three points.

Second, it entails the use of spiritualized language that, on many occasions, is capable of creating ambiguous perceptions of reality and justifying evil by resorting to words such as dedication, gift of oneself, sacrifice, community, mission and so forth.

And third, it almost always capitalizes on the bond of obedience.

The abuse of power is not found only in the long-established religious orders and institutes. It is also present in the new ecclesial movements and Catholics communities founded and led by seductive charismatic personalities.

Such personalities often attract members through spiritual seduction. In the worst cases, this fosters blind loyalty and total surrender to the will of the leader.

It's especially operative in communities where institutional systems aimed at preventing such spiritual seduction are absent or frowned upon by the members of those communities.

The wave of revelations of abuse and misconduct of different kinds (included sexual) in lay-led ecclesial communities is one of the new elements of the latest phase (since 2017-2018) in the history of Catholic Church's abuse crisis.

It's no longer just the clerical institutes like the Legionaries of Christ, which was founded by the serial abuser Father Marcial Maciel.

Not all abusive power is linked to clericalism

Now we are discovering abuse in movements that are not identified with a clericalist, anti-modern ideology. It is also present in a Catholic culture open to the modern world, such as Schoenstatt, the Focolare Movement, and L'Arche.

Other recent cases have emerged that have revealed the troubling past of certain Catholic charismatic leaders, such are Father Jean-François Six in France.

There has been a growing awareness of the scope and seriousness of the abuse of children, women, and vulnerable adults. The well-known MeToo movement is one result of this.

As we begin to more carefully appraise the complicated contribution made by new ecclesial lay movements, the Church is already reeling from the scandals caused by charismatic leaders — some long deceased, others still living.

This is one of the reasons why the pope's push for a synodal Church is so important.

Francis is demonstrating once again that he believes history is truly a magistra vitae — a teacher of life.

He's a Jesuit whose real genius is spiritual direction. And in light of the last few decades, he's aware of the risks that the Church runs when it blindly follows the charismatic leadership of individuals.

In his pontificate, Francis has repeatedly warned all new ecclesial communities and movements to avoid the risks of sectarianism and respect the personal and spiritual freedom of its members.

He issued a motu proprio last November called Authenticum charismatis that amends canon law (no. 579) and requires bishops to get authorization from the Holy See before they approve a new religious institute at the diocesan level.

New movements no longer have a blank check

The action Francis has taken during his eight years as pope in terms of the relationship between institution and charism signals an undeniable change. It is a shift from the way John Paul II and Benedict XVI dealt with the new ecclesial communities.

Under the two predecessors such communities were above scrutiny and untouchable as long as they were willing to submit to the pope and present themselves as the Catholic solution to the problem of secularization.

Not anymore. Francis is quietly implementing a critical reassessment of the ecclesiology of the "creative minorities", in a way that echoes Paul VI who was more aware of the risks of sectarianism in these movements.

The "ecclesiology of the people", which Francis espouses, is critical of all elitism in the Church. That includes the elitism of charismatic leaders.

It is indisputable that the blank check John Paul II and Benedict XVI gave to the new Catholic movements also corresponded to a pushback against the synodal movements that had been typical of many local Churches in the early decades following the Second Vatican Council (1962-65).

Especially in the 1980s and 1990s, the Vatican used the new Catholic movements to counter what was perceived as progressive extremes of the post-Vatican II period.

These new movements also embodied a turn against the more democratic culture and synodal systems of governance of the "old" lay Catholic associations (such as Catholic Action).

These movements, founded and led by charismatic personalities, were seen by the Vatican as reliably obedient and indifferent to the theological and ecclesial issues raised by progressive lay Catholics. All this has had costs.

Francis' recovery of synodality is also a way to warn against the dangers of charismatic personalities in the Catholic Church.

This is a novelty that upends the contraposition typical of mainstream Catholic culture between institution (identified with the unchangeable and possibly corrupt ecclesiastical status quo) and charism (hailed as the gateway to the liberation of Catholicism from the shackle of the past, of clericalism, etc.).

Countermeasures against the dangers of charismatic leadership

Francis' synodality is warning against both liberal-progressive and conservative Catholicism's enchantment with charism, which often has become uncritical acceptance of the role of the leader.

The old "extra Ecclesiam, nulla salus" became something like "extra charisma, nulla salus" — there is no salvation outside of a Church of creative, intentional communities led by charismatic personalities.

Of course, the modern papacy has, itself, morphed into a charismatic role.

Francis has not rejected an interpretation of the papal office as based on personal charisma, but he is providing essential countermeasures against the dangers of charismatic leadership.

Synodality makes it possible to rebalance the voice of the Church's clerical members with the voice of lay people.

However, it's not just the laity in general, but the type of laity. It's about limiting the voice of lay people who have disproportionate influence (for example, in Catholic media) because of their financial resources and political connections.

It's about giving a greater voice to the members of the people of God to balance those who might be called "Church celebrities" — both lay and clerical — who can leverage their popularity in the ecclesial community both at the micro and the macro level.

Synodality is also a product of a new awareness in the Catholic Church that charisms can easily be transformed in abusive power in ecclesial communities or demagoguery in the Church.

We have seen this in the last few years with the new phenomenon of new Catholic censors and cyber-militias active in the media and social media.

The modern definition of "charismatic leadership" in politics is attributed to the early 20th century social scientist Max Weber, who was suspicious of the tendency of charisma to become Caesarism.

A century after Weber's death in 1920, perhaps we in the Catholic Church are beginning to take that lesson seriously.

It's indisputable that all forms of ecclesial leadership are always inculturated.

Modern mass media and social media have portrayed charismatic leadership in the Church more as the Weberian sense of flattery and demagoguery, rather than charism as "a gift of God's grace", as described by St. Paul in his letters.

In the throes of the sex abuse crisis, the Catholic Church has woken up to the possible dangers of charismatic power in ecclesial communities. But the ripple effects of our reflection on this crisis go way beyond the problem of abuse.