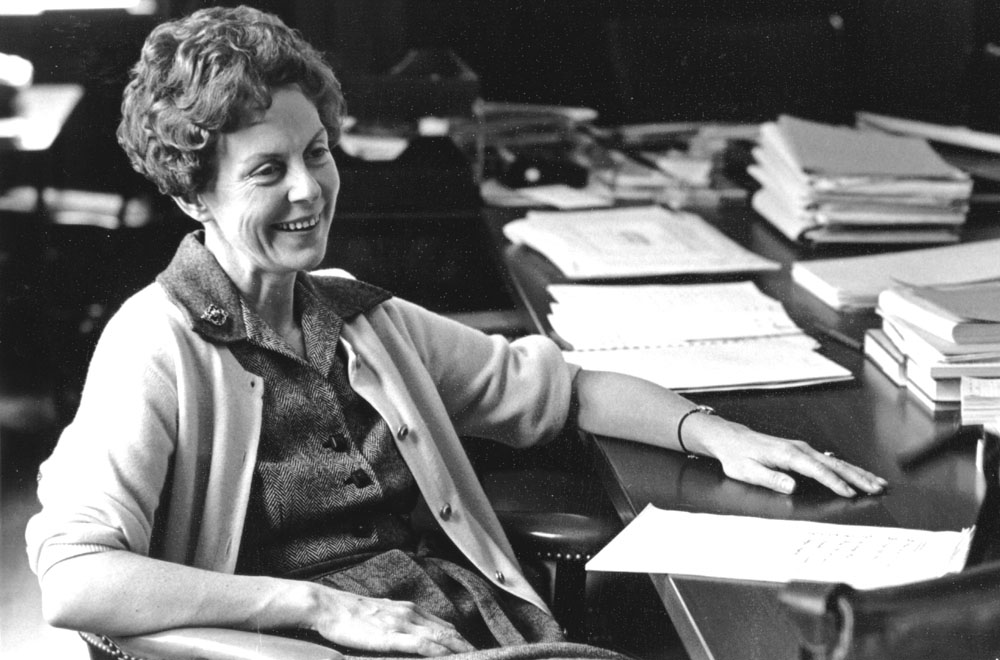 "Do something, Jill. Don't just put in time on this earth."
—William Ker to his daughter

Grit and grace. It was this rare combination which characterized the life of Jill Ker Conway. Born in 1934 in the windswept and drought-haunted outback of New South Wales, Australia, she achieved acclaim. A historian and memoirist, she served as the first woman president of Smith College, and later in life she would be a recipient of the National Medal of Arts, the National Humanities Medal, the Companion of the Order of Australia, Time magazine's Woman of the Year designation, and 38 honorary degrees. In the end, the grit of her early life was interwoven with the grace she brought to all she did.

Conway lived on a family ranch of 32,000 acres, far removed from any town, school or church. Her life was solitary, the nearest neighbor being 50 miles away. Other than her two brothers, she had no playmates. She claimed not to have met another girl until she was 7 years old. Her work was herding and tending sheep, helping to maintain her family's hard-scrabble life.

Tragedy struck when the ranch failed. Her father, a devout Catholic, died, as did one of her brothers, forcing her mother to move what remained of the family to Sydney. There Conway began her formal education and attended the Catholic Church. But the outback had already formed her. The vastness of nature, the comfort of solitude, and hard physical labor all molded her.

Intellectually self-confident and chastened by difficult experiences, she completed her education at the University of Sydney, graduating first in her class. However, she quickly realized she would not find employment commensurate with her ambition in Australia. This limitation, plus her desire to free herself from the grip of a psychologically dependent mother, led her to apply to Harvard University, where she would earn a doctoral degree in history. She claimed she studied history in order to understand the social forces which diminished her mother's life. It was these early years in Australia and her decision to leave that she chronicled in The Road from Coorain, one of the best loved memoirs of the 20th century.

True North, her second memoir, tells of her years at Harvard and her marriage to one of her professors, the historian John Conway. Although he was 18 years her senior, during their 33 years of marriage, which ended with his death in 1995, John Conway proved to be an immensely supportive partner, irrespective of his debilitating depression. In 1964, the Conways left Harvard for Toronto where she began teaching at the University of Toronto and subsequently was appointed its first woman vice president.

The last of her trio of memoirs, A Woman's Education: The Road from Coorain Leads to Smith College, is the story of her presidency of Smith College in Northampton, Massachusetts, which began in 1975 when she was 40. She stayed 10 years. Academia's full intransigence to change was the background against which Conway attempted to institute a curriculum which would serve the contemporary needs of women students.

During her tenure, courses in women's studies, business and engineering were added; athletics was supported; non-traditional age students were enrolled; and financial aid was extended. What A Woman's Education makes clear is that Conway harnessed her personal ambition, intellectual acuity, and ability to take risks in order to advance the ambitions of other women. Her innate shyness allowed her to do all she did with humility.

After she left Smith, Conway was named a visiting professor at Massachusetts Institute for Technology, served on the boards of Nike and Merrill Lynch, and continued to write about male and female autobiographies and how and why they differed. She expanded the field of life-writing by editing Written by Herself: Autobiographies of American Women and In Her Own Words: Women's Memoirs from Australia, New Zealand, Canada, and the United States, and authoring When Memory Speaks.

If grit characterized Jill Ker Conway's personality, so too did graciousness toward others. Intellectual, tenacious and fearless, she nonetheless cared about individuals and treated all she met with respect. Over the course of her life she drew on various sources of inspiration. Her early life in the Australian outback gave her an appreciation of solitude and of the natural world. Her father's Catholicism impressed her, as did her reading of the Bible. The remoteness of her life with its absence of ecclesial authority allowed her to freely ask questions of meaning and to form an independent conscience.

Her advanced study of history, especially her doctoral dissertation on American female reformers like Jane Addams, was also a formative element in her life. She credited Catholic influences in giving her a sense of vocation. In her case this was to uncover the history of women as revealed in their autobiographical writings and to create an intellectual environment in which women could flourish and find their own vocations.

She took seriously the importance of women mystics, especially St. Julian of Norwich and St. Teresa of Avila. Believing as she did in the value of community, she derived encouragement from the achievements of women's religious communities; she rejoiced when her parish, St. Mark's in Conway, Massachusetts, a small, diverse mission church, was able to create a vibrant spiritual community largely independent of ecclesial direction. Her commitment to social issues expressed itself in her long-standing concern for homeless veterans, which resulted in the opening of the John and Jill Ker Conway Residence in Washington, D.C., in 2017.

Conway died June 1 at age 83. Her funeral service was held at her much-loved St. Mark's. Unable to have children, her progeny were the multitude of women whom she inspired, pioneered opportunities for their education, and left a trove of writing to motivate them. An avowed feminist, her life was whole and integrated, liberated and realized; it was grounded both in grit and grace.

Fully alive, Jill Ker Conway in her living fulfilled her father's admonition, to "do something," and Irenaeus' claim that the one fully alive gives glory to God.

[Dana Greene's latest biography, Elizabeth Jennings: The Inward War, is to be released in November from Oxford University Press.]