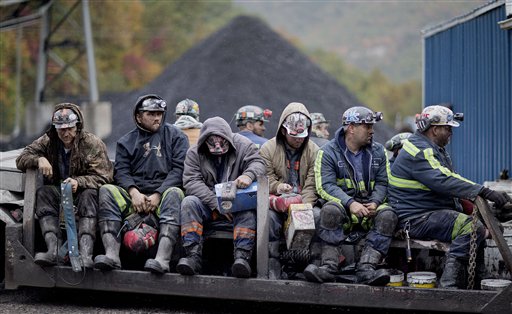 In this Oct. 15, 2014 photo, coal miners return on a buggy after working a shift underground at the Perkins Branch Coal Mine in Cumberland, Kentucky. (AP Photo/David Goldman)

Last summer, just before the before the July fourth holiday, mining company Blackjewel took a holiday — with its employees' money.

On July 1, Blackjewel declared bankruptcy, and soon afterward, some 300 mining employees discovered they no longer had jobs — in the worst possible way: Their bank accounts were empty, because the company's paychecks were no good.

They also discovered that their 401(k) payments had not been deposited, nor, in many cases, had court-ordered child support payments. Both were applied to pay the company's various bills.

Having reported on some temporary relief the miners received in July, I wanted to see how things were going now.

After all, the news cycle moves on. People lose interest. Vehicles, however, still get repossessed, medicine is not cheap, rent must be paid, and children need to be fed.

"Things are still mired down in the bankruptcy proceedings, and we are waiting for the bankruptcy judge in Charleston, West Virginia, to rule on the case," Judge Mosley explained.

The coal is considered by miners to be "hot goods," because, as Mosley noted, "it is classified by the Department of Labor as something already mined, but the people who mined it have not been paid."

This writer contacted the Federal Bankruptcy Court in Charleston, West Virginia, to determine if any progress was pending towards a settlement. Bankruptcy Court Judge Frank Volk, however, had yet to rule on the matter.

So why even bother with another story on this situation?

Maybe it is because this writers' great-grandfather worked in the West Virginia coal mines — one of a small number of black miners at the time — and helped unionize some of them.

Maybe, because, as a light-skinned black man, he passed for white and also helped white miners organize too. From him, this writer learned about the dogs, the bounties placed on activists' heads, the beatings, jail and a "legally" empowered security force (read: thugs).

Meanwhile, today, in the town of Harlan (population 1,551), which is located in one of the poorest counties in the U.S., the struggle to survive continues.

Fr. Terrence DeSilva has been the pastor of Holy Trinity Catholic Church here since July 1. He is also responsible for the neighboring parishes of St. Stephen's Catholic Church in Cumberland, (the county's largest city) and The Church of the Resurrection in Lynch.*

"Our basic human needs are food, clothing and shelter, but if there are children in the family, then schooling also may be needed, and we have requests for food and clothing daily," Fr. DeSilva said.

The priest arrived in Harlan County with a second collection from his old parish, the Newman Center located on the University of Kentucky campus. A total of $5,363.00 was collected for the Holy Trinity Parish Outreach Program.

"Many people call our parish requesting help paying their utility bills, and, after the mining issue our larger food pantry at St. Stephen is seeing an increase in numbers," Fr. DeSilva noted.

Some relief is already in place as many of the affected miners qualify for Medicaid.

"A local clinic is offering free medical treatment to the miners and their families, and several local businesses have everything from free haircuts to free pet food, personal care items, and free school supplies," Fr. DeSilva said.

He noted the unemployment rate in Harlan County is quite high, and although there are some jobs available, these are not comparable to the lost jobs.

Judge Mosley added, "We did host a job fair, and we do have a highly skilled work force, so much so that some people have been able to find jobs in other communities."

He also noted, "We are working on a long-range project which is basically a build-ready site for any firm that wants to invest in the county."

He also complimented the workers who were continuing to block the railroad shipment's access. "They have done [their action] the right way; there have been no issues whatsoever, and they are a model for others to learn from."

Apparently, some people in the "others" category did learn something.

"Law enforcement officials had talked about removing the protesters from their camp but once they realized themselves the effect of all this, they lost all interest," Mosley said.

The unemployed miners manned their protest site seven days a week, in all kinds of weather, around the clock. Many of them were accompanied by their wives and older children. The numbers only dwindled as people were worn down by the necessity of having to support their families, and forced to find other work.

On Sept. 26, the protest site began to disband after Gary Lewis, a former Blackjewel foreman and the unemployed miners official leader, made a crucial decision.

"He took a job with a trucking company down South, and he had to be there tonight, because he had to support his family," local reporter Jennifer McDaniels told NCR. "It was a difficult decision for him to make, and without him, the protest — at least blocking the railroad tracks — has lost its momentum," McDaniels said.

People in Harlan County, however, are still hurting.

*This story has been updated to correct the name of the parish.