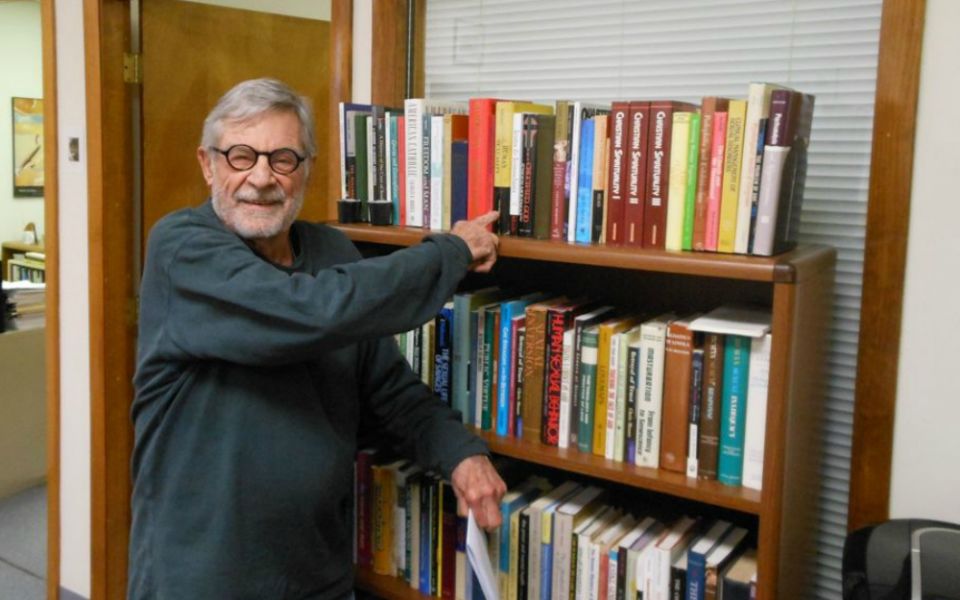 Richard Sipe, in the offices of BishopAccountability.org, points to a collection of his books that he gave to the church watchdog organization. (Courtesy of Fr. Tom Doyle)

I watched the documentary, "Sipe: Sex, Lies, and the Priesthood," with a mix of very powerful emotions: profound admiration and gratitude for all that A.W. Richard Sipe had done and all that he continues to do, and very painful sadness. Richard and I go back to the earliest years of the clergy abuse phenomenon. From the day we first met something clicked between us, and our collaboration grew into a deep and loving bond that the word "friendship" can't really capture.

The documentary accurately showed Richard as a loving and gentle person who attracted people to him, especially people who were troubled, precisely because the empathy he shared was real, and because it was real it transcended the barriers of fear so many have when they seek help. He connected with people in a way I have never seen in anyone else.

The only people he didn't seem to be able to connect with, at least on a deeply personal level, were the bishops. Had they been able to overcome their own barriers of narcissistic self-concern, they too would have been blessed to know this unique man and even more important, would have possibly learned from him.

In the documentary the analogy of a closed door was used several times: Richard walking through doors no one else had the courage or the wisdom to open. I have been able to appreciate what he has done — perhaps more than anyone, with the exception of his wife and soulmate, Marianne.

Richard did not stop with a few closed doors. He really was fearless. I think a better analogy of what he has done needs to be much more dramatic. Without planning it, he mounted a huge bulldozer, fired it up and headed straight for the institutional church, a mountain the size of Mount Everest with an even higher wall of denial. It took a few years of repeated runs at that wall but Richard managed to blast through. Instead of using diesel fuel, his bulldozer was propelled by a very threatening, powerful and painful truth. He opened more than a door. He blew away a system marked by myth, fantasy and denial, a system that will never again be able to hide the truth at the expense of countless innocent children and adults.

We now know, after the constant revelations about the true state of clerical celibacy, that Richard was right. When he first published A Secret World: Sexuality and the Search for Celibacy in 1990, he was angrily and arrogantly rejected by the bishops and scorned by a number of priests. I recall watching a documentary on celibacy that featured Richard. Afterwards a representative of the Catholic bishops' conference scoffed at him and said that 99.44% of priests are truly pure. And I know a chicken that can play chess!

This was Richard's first book, and it was not an opinion piece but the results of years of ethnographic research that involved in-depth interviews with 1,500 subjects. He wasn't out to destroy the priesthood, the church or celibacy. He really did love the church and honestly wanted to help. This came through vividly in the documentary. But his painfully careful research yielded results that could not be ignored. Richard was living in the world of reality.

His book was published just as the clergy sex abuse phenomenon was taking on a life of its own despite the official church's haphazard attempts at making it go away. He had no political agenda. He wanted the bishops to look at reality because he knew that the longer they tried stuffing the problem into a backroom closet, the sooner it would explode, and explode it did.

Related: For Richard Sipe, pattern of deceit in celibate culture was his Wittenberg

Richard and I worked together as expert witnesses on more cases than we could count or even wanted to count. In the film he was shown working at his dining room table surrounded by piles of paper. This was the most tedious and frustrating aspect of the work we both did, but for Richard it was often the starting point for his connection to the victim. For us this was not about helping the lawyers win. It was first and foremost about helping victims find peace. From the beginning of our involvement we both watched as so many of the attorneys, who were the first line of full disclosure for many victims, provided them what the clergy should have given but couldn't or wouldn't: compassionate understanding, support and respect.

We didn't consider this as a case-by-case job helping lawyers. Each case was part of a totality, part of the dark side of the church that the leadership was and still are deathly afraid to confront. Each pile of documents brought new and different stories of pain, betrayal, stupidity and terminal narcissism.

It never became "just business" for Richard. He entered into a personal relationship with each victim even though he'd never meet most of them face to face. With that relationship came his commitment to dig even deeper into the mysterious quagmire, wondering if he'd ever get to a definitive answer to the question "Why?" Equally vivid for Richard was his deep and honest concern for the welfare of every victim he ever came in contact with — those he knew at a distance through the expert work and the countless ones he interacted with and to whom he brought his unique, never-to-be-forgotten aura of tenderness, acceptance and caring.

I was honored to be asked to speak at Richard's memorial service on Sept. 22, 2018. In my remarks I repeated something I had said to him many times: His institutional priesthood may have ended in 1970, but his real priesthood and his incredible ministry really started when he met and married Marianne, his wife, his companion and his soulmate.

Marianne was far more than a silent partner hovering in the background while Richard was in the spotlight. She was an integral part of every idea, every breakthrough and every grenade Richard lobbed at the dishonesty of the system. I don't think Richard's momentous research, his radical conclusions and his super-courageous confrontations with the ecclesiastical monarchy could have happened apart from his union with Marianne. I can say this because I was so often an intimate part of this process and the certitude, the wisdom and the strength Marianne infused in Richard always rubbed off on me.

Over the years my relationship with both Richard and Marianne grew into an intimacy that I now see as one of the greatest gifts in my life. The three of us shared a unique distinction in this whole sex abuse saga. We had all been on the inside in religious life and each of us struggled with the effect on our lives as the worlds that had shaped us in so many ways, the worlds that had been our hope, disintegrated.

I have always believed we were our own support group. We spent countless hours sitting around the wooden table just off their kitchen, exploring this phenomenon that had so much influence on who we were and where we were going. Those conversations were the most intellectually stimulating and fulfilling I have ever experienced. I'd leave to go home and return again maybe a couple months later and we'd pick up where we had left off, digging deeper, reaching new insights but all the while searching.

We each had come up with answers on increasingly deeper levels but they were never enough. We were looking for the ultimate answer. Why has this happened, and why did the institution we all once loved and trusted allow so many innocent people to be devoured?

Those countless hours were stimulating, revealing and encouraging but for me at least, and I believe for Dick and Marianne, they were much more. We forged a bond that provided invaluable mutual support through the dark, spiritual tunnel we each had to pass through. Without Dick and Marianne I would not have made it to the end of that tunnel. Dick's fearless commitment and Marianne's gentle wisdom gave a meaning to what we were doing that I know I could never find elsewhere.

It is not blowing rhetorical smoke to say that Richard and Marianne Sipe had a profound and lasting influence on the church. When I first became involved back in 1984 as a young cleric working at the Vatican embassy, I had not the vaguest clue as to where it would go and I had no idea that I would be on that ride. We are now 10 years past a quarter of a century into that ride and it has forever changed the fabric of the Catholic Church. When Dick Sipe drove his bulldozer through that seemingly impenetrable wall, he proved that the painful and threatening quest for truth can actually bring real change.

Richard and Marianne changed the course of history for the Catholic Church and for the most vulnerable of its members. It was and will continue to be a change that is not welcomed by many but resisted. Yet it is a change that is essential if we are to see a transformation from a decaying monarchy to what the church really is, the body of Christ.