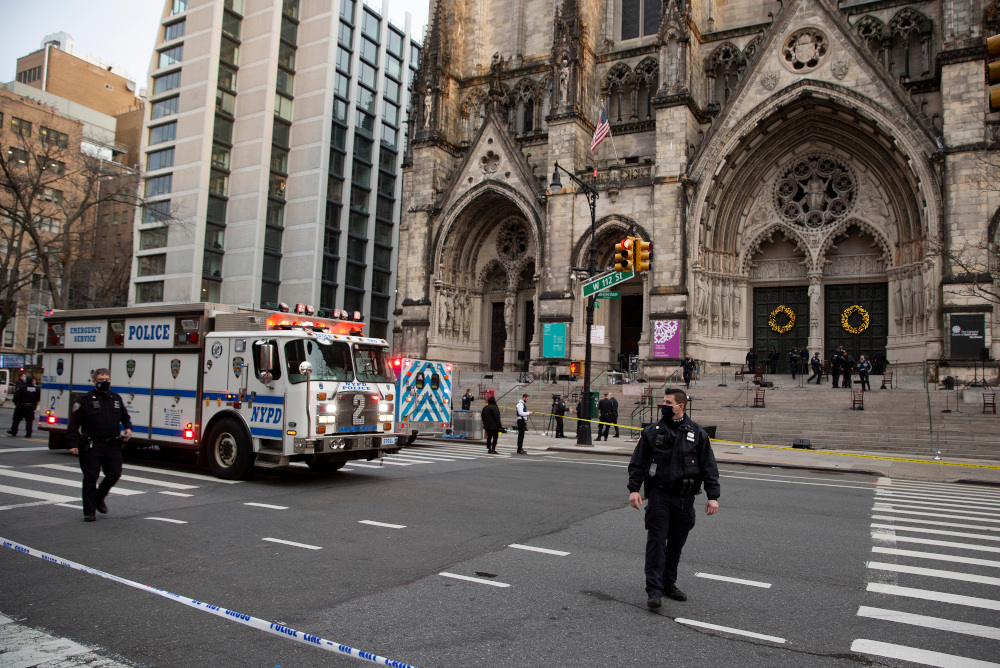 New York police officers block off the scene of a shooting at the Cathedral Church of St. John the Divine, Sunday, Dec. 13, 2020, in New York. Police fatally shot a man after shots rang out at the end of a Christmas choral concert on the steps of the Manhattan cathedral Sunday afternoon. The shooting happened just before 4 p.m. at the church which is the mother church of the Episcopal Diocese of New York and seat of its bishop. (AP/Ted Shaffrey)

A man was fatally shot by police on the steps of a landmark New York City cathedral Dec. 13 after he began firing two semiautomatic handguns at the end of a Christmas choral concert, police said.

The gunfire began just before 4 p.m. at the Cathedral of Saint John the Divine, mother church of the Episcopal Diocese of New York.

A 45-minute concert held on the cathedral steps had just concluded and a crowd of several hundred people was drifting away when the gunman started shooting, sending people running down Amsterdam Avenue screaming and diving to the sidewalk.

A detective, a sergeant and a police officer who were at the event fired 15 rounds, killing the man, said New York Police Commissioner Dermot Shea.

"It is by the grace of God today," he said, that no one besides the gunman was struck.

The gunman was dressed in black with his face obscured by a white baseball cap and a face mask. He held a silver pistol in one hand and a black one in the other as he stepped from behind a stone column at the top of the staircase.

Witnesses told police the man was yelling "kill me" as he fired, Shea said. The man's name was not immediately released.

The man had a lengthy criminal history and was carrying a backpack containing a can of gasoline, rope, wire, tape, knives and a well-worn Bible, Shea said. The police commissioner called the actions of the officers "heroic."

It wasn't clear if the gunman was aiming at people or firing in the air. 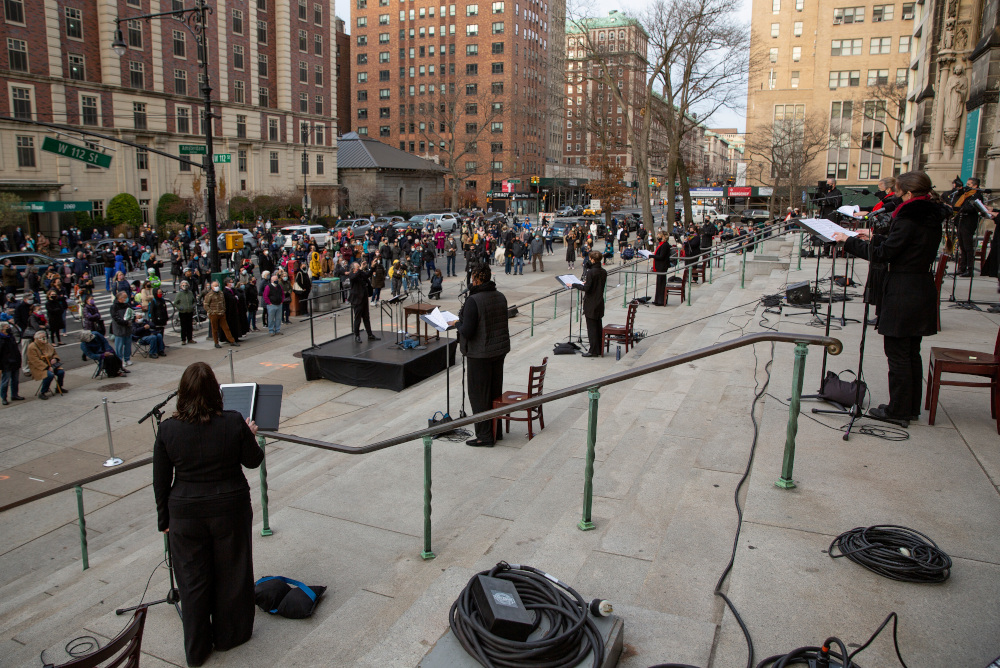 The Cathedral Choir performs on the steps of the Cathedral Church of St. John the Divine, Sunday, Dec. 13, 2020, in New York. Police fatally shot a man after shots rang out at the end of the Christmas choral concert on the steps of the Manhattan cathedral Sunday afternoon. The shooting happened just before 4 p.m. at the church which is the mother church of the Episcopal Diocese of New York and seat of its bishop. (AP/Ted Shaffrey)

A video posted on social media by one bystander showed officers crouched behind trash cans yelling "drop the gun!" and firing carefully aimed shots at the man for at least a minute and half as he darted in and out from behind a pillar.

Some terrified civilians lay prone at the bottom of the steps, clutching each other during the gunfire. Others cowered behind a lamp post. They ran for safety after the gunman was felled by an officer's shot.

Before the gunfire began, the concert featured members of the cathedral choir standing far apart on the stone steps wearing masks because of the coronavirus pandemic.

"It was just beautiful, and then at the end this person started shooting. Everybody is in shock," a cathedral spokeswoman, Lisa Schubert, told The New York Times. "The shooter could have killed a lot of people. There were hundreds of people here and he shot at least 20 times."

"It is horrible that our choir's gift to New York City, a much-needed afternoon of song and unity, was cut short by this shocking act of violence," cathedral spokeswoman Iva Benson said by email.

The cathedral is one of the world's largest. Construction began in 1892 and is still incomplete. The church has been connected to many New York luminaries and notable events over its long history. President Franklin Delano Roosevelt was a trustee. It hosted the memorial services for puppeteer Jim Henson and choreographer Alvin Ailey, and speakers over the years including South Africa's Nelson Mandela and Archbishop Desmond Tutu.