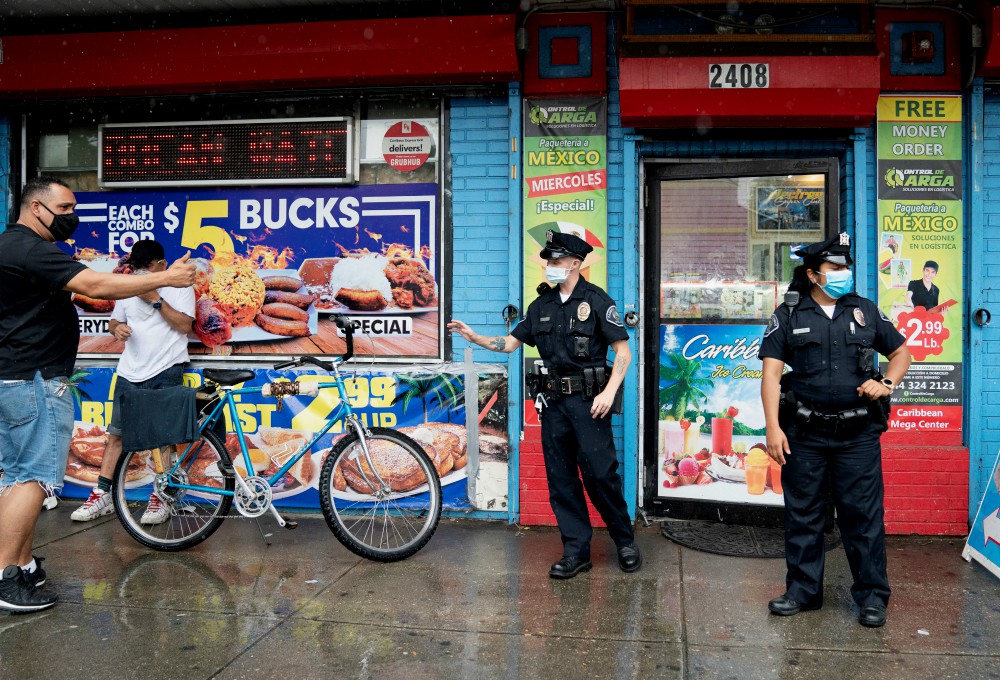 During his tenure as police chief of Camden, New Jersey, J. Scott Thomson gave Bishop Dennis Sullivan, the leader of the local Catholic diocese, a tour of the city of 73,000 across the Delaware River from Philadelphia.

It was a time when Camden was experiencing homicides at a higher rate than Honduras, then known as the murder capital of the world. Camden was competing for the crime capital of America and, by most accounts, was a winner of the dubious title.

Sullivan reached into his pocket and presented the chief with a rosary blessed by the pope.

"You will need this more than I will," he said, according to Thomson's recollection. 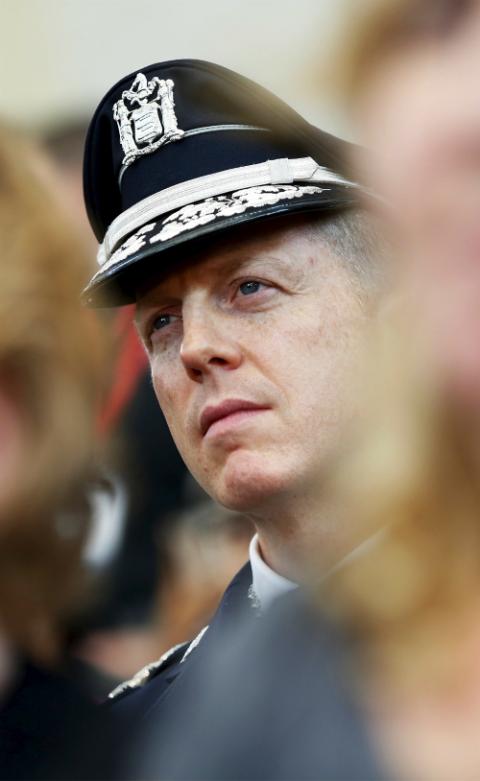 Seven years have passed. After the killing of George Floyd by Minneapolis police, Black Lives Matter protesters filled streets around the world with demands to Defund the Police. The Minneapolis City Council recently voted to advance a proposal to disband the city's police force and reconstruct it, a response to the turmoil resulting from the Floyd killing.

Thomson left the Camden force last year and is now an executive fellow with the National Police Foundation and director of security for Holtec International, a supplier of equipment for energy companies. He is in a position to explain what is widely seen as a turnaround in the troubled little city.

While protesters call for defunding the police, Camden went further. In 2013, it disbanded its entire force, which had a reputation for corruption, brutality and high absenteeism. The city force was fired, replaced by a county-run operation led by Thomson, a Camden native who was the chief of the old city force. He was joined by about half of the former force who were rehired and supplemented by new recruits. The old police union contract was thrown out.

Because of budget cuts, some 46% of the force had been disbanded in a single day in 2011. Radical action to create a new force, agreed to by local Democratic politicians and New Jersey's then-Gov. Chris Christie, a Republican, didn't materialize immediately. Far from it. In 2012, Camden hit its nadir, with a murder rate more than 18 times the U.S. average, Thomson wrote in a recent op-ed in The Washington Post. The city had more murders than the states of Hawaii, North Dakota, South Dakota, New Hampshire and Wyoming combined, he noted, citing FBI statistics.

The next year, the chief of the new, embattled force gave new recruits a speech.

"You will have an identity that will be more Peace Corps than Special Forces," he said. Recruits attracted to the job by the opportunity to crack heads or bully others would be fired immediately, he told them.

Thomson is now a most sought-after interview subject. After the Floyd killing, he has been called upon for more than 300 interviews from around the world, including The New York Times, National Public Radio, and media outlets as far away as China and New Zealand, he said.

He cautions that the Camden story is not a miracle, but the result of a conscious change in policing strategy intended to make the police more visible while enlisting the support of the embattled citizenry.

"For every action, there's a reaction," he told NCR in a recent phone interview, careful not to overstate Camden's story. "Nobody is saying that Camden is a utopia or that the Police Department is without sin. It's not a success. It's progress."

Camden still has a story to tell to a nation torn apart by issues of crime and police violence. Effective crime fighting, said Thomson, involves both community support and police presence. He told his cops to get out into the streets, play ball with the kids, get to know the neighborhoods. Broadway, one of the city's main thoroughfares, was flooded with police, and the most blatant forms of open-air daylight drug dealing were pushed underground.

Meanwhile, the police instituted ice cream trucks and block parties, and officers made a point of knocking on doors to introduce themselves.

"We pivoted. There are moments to celebrate," said Thomson.

The count of 67 murders in 2012 — a figure memorialized at Camden's Cathedral of the Immaculate Conception in an annual year-end vigil — dropped to 25 last year, according to the Uniform Crime Reports of the New Jersey State Police.

The results are seen not only in the numbers but in the vibe of the city, which is 94% racial minority with more than a third of households living in poverty, according to Data USA.

Camden, once known for industrial jobs provided by RCA and Campbell Soup, no longer beckons to blue-collar union labor. And the economic issues continue. But now, however, said Thomson, people are likely to see parents enjoying an afternoon respite on their front stoops. Children can ride their bicycles on streets previously so violence-ridden that Camden residents huddled inside.

Thomson is filled with axioms that promote what has been called community policing while cautioning against the view that cops can solve social issues on their own.

We give cops a gun, a ticket book and handcuffs, and ask them to solve problems that people with doctorates haven't figured out.'

"Social inequalities created a perfect storm. It won't be addressed by force, might or incarceration. Crime is a symptom," he said.

The complaint he's heard is the argument against militarized policing. People in Camden, he said, didn't want to eliminate police, they wanted to change them. "What they wanted was not fewer police but they wanted us to behave differently," he said.

"We give cops a gun, a ticket book and handcuffs, and ask them to solve problems that people with doctorates haven't figured out," he said.

The newly-formed Camden police were told not to focus on arrests or tickets, noted Thomson. Instead, they were asked to be a visible presence in the neighborhoods, he said.

Thomson described how the approach reinforced the presence of people in the community who were more willing to venture out into the streets. In turn, they became the eyes and ears of the police, willing to talk to officers they knew. Gone were massive dragnets of young men when a violent incident occurred, actions that often generated resentment and standoffishness toward the authorities, he said.

Thomson described it as fishing with a spear rather than a net. Murders in Camden were once resolved at a 16% rate, he said, and they now are resolved more than 60% of the time. "The people were telling us things. That made us much smarter."

Much of the drug trade was moved underground. For Thomson, curbing the open-air drug dealing may be the most police can be expected to achieve. Most of the customers come in from the suburbs. The salespeople ply their trade on the streets of Camden. Drugs, he said, offer an intractable dual problem: poverty, relieved by those who engage in the trade to make a living, and addiction, compelling customers to seek out the product.

"Police can't change either one of them," he said. 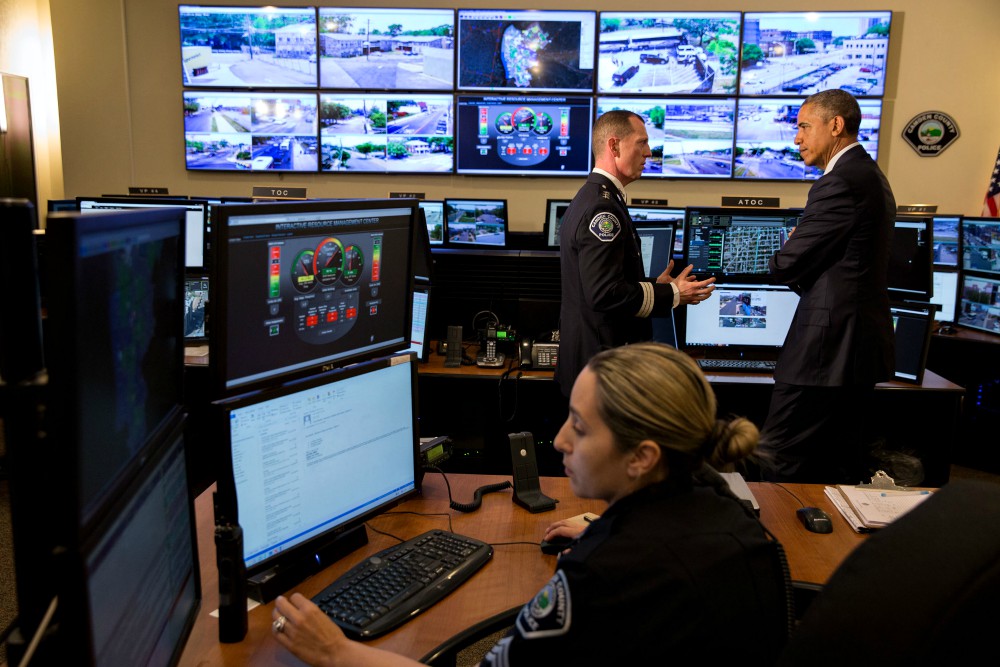 A visit from President Barack Obama in 2015 highlighted Camden's successes. Now there is massive international media attention, attracted by the hope that Camden has unlocked the key to curtailing crime while earning the respect of the community.

Amid all this attention, Thomson said he keeps in mind the role of his Catholic faith. Police work, he said, is his vocation, a helping profession. When he worked for the police department, he often consulted with chaplain Msgr. Michael Mannion.

"The spirituality aspect of the work was extremely important to keep a reminder of why you do what you do every day," he said.

Thomson combined community policing with his own faith, once acting as a godfather for a Camden boy blinded after a shootout between drug dealers.

He is the product of Catholic schools, including Sacred Heart in Camden, St. Mary's in Gloucester City, New Jersey, and Gloucester Catholic High School, and an education graduate degree from Seton Hall University.

Faith, he said, is an essential part of his police vocation. The work, he said, "is stressful. You fail more than you succeed. When you see little kids murdered it will take a toll on you if you don't have a strong faith to rely on."

A national police study he contributed to had a guiding principle right out of Catholic social teaching: "The key principle was the sanctity of human life," said Thomson.

Msgr. Michael Doyle, the longtime pastor of Sacred Heart Church in Camden, is proud to note that the former chief still has a picture of kindergarten graduation at the parish school, a picture the two reenacted 40 years later. 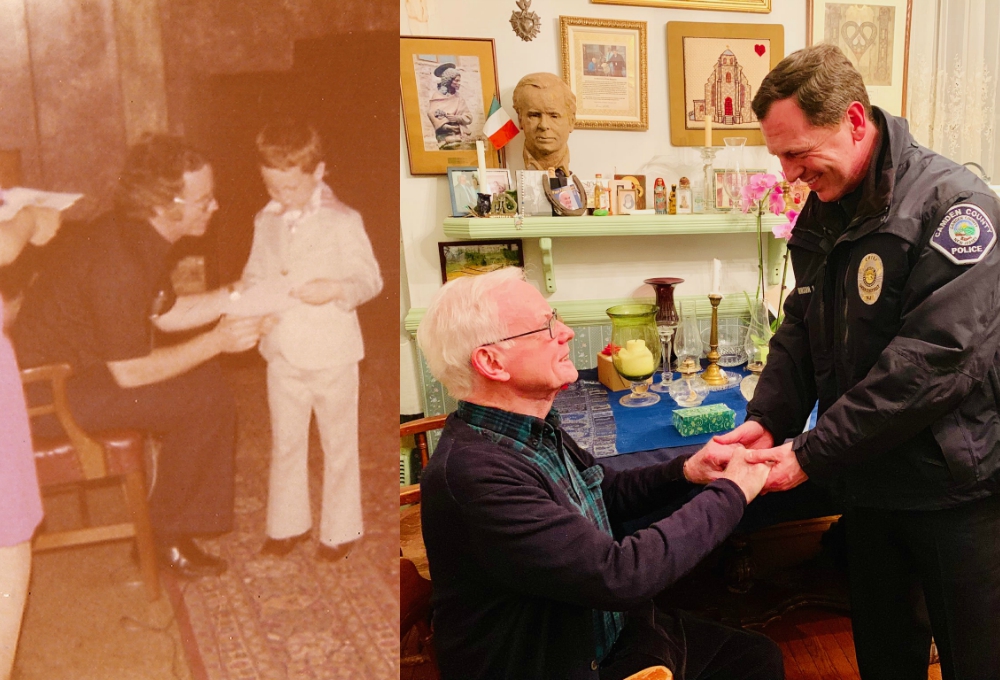 Doyle came to Sacred Heart back in 1968, an era when he was active in civil rights and anti-war efforts. He listened as Robert Kennedy campaigned there in part to highlight the plight of troubled urban centers. Doyle has been identified with Camden ever since being profiled for his ministry by the late Harry Reasoner for an early edition of television's "60 Minutes."

Thomson offered a breath of fresh air to the city, said Doyle. "He changed the whole tone of police behavior," he said, noting that Camden police began creating an ethos of respect for others that assisted in cutting the city's burdensome crime rate.

For Thomson, the proof of success is in the small things. Parents being able to sit on the stoops of their houses, watching their children play, is a big victory. And the fact that Camden has remained relatively calm during the current period of unrest is also testimony to improved police-community relations.

No one would say that battered Camden is a verdant utopia. Thomson keeps his papal rosary handy. But change is worth celebrating, he said.

"I think that what we have found is that those who don't like the police but they like their cop. When bad things occur, we are getting the benefit of the doubt," said Thomson.

[Peter Feuerherd is news editor of National Catholic Reporter. He was director of communications for the Camden Diocese from 2010 to 2015.]

A version of this story appeared in the July 10-23, 2020 print issue under the headline: Changing police in Camden.