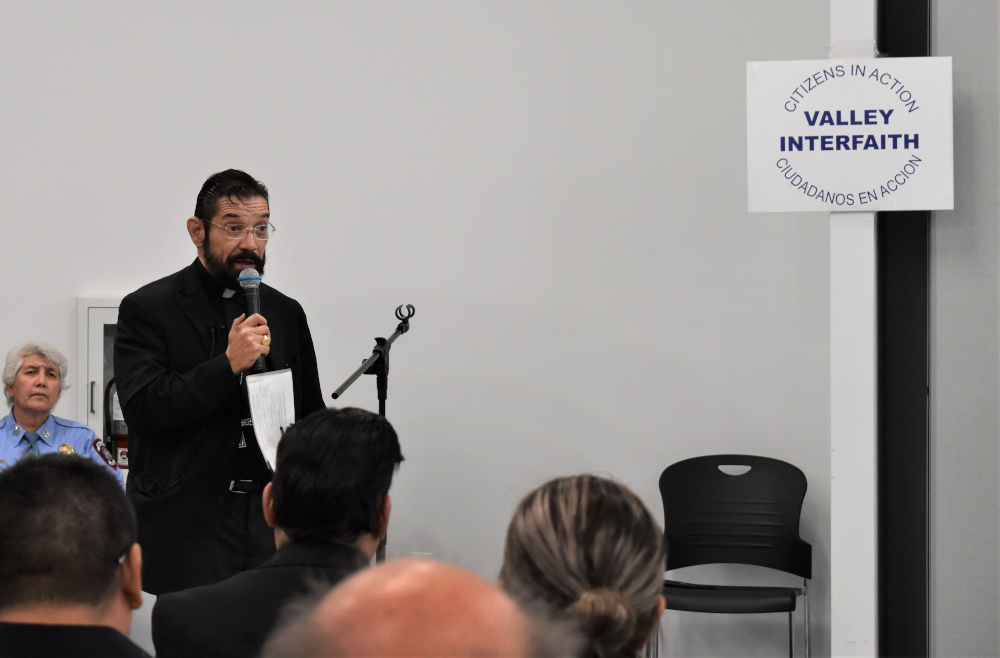 Bishop Daniel Flores of of Brownsville, Texas, addresses a crowd of nearly 500 people gathered Sept. 24 in Las Milpas to help introduce the "parish identification strategy." The program provides photo ID cards to parishioners issued by individual parishes or organizations that local law enforcement and city officials said they will accept as valid identification. The cards cannot be used as a driver's license or in place of a government ID. (CNS/The Valley Catholic/Paul Binz)

The Diocese of Brownsville and a group on interfaith leaders in the Rio Grande Valley have introduced a "parish identification strategy" to provided members of parishes in the diocese a way to identify themselves to local law enforcement regardless of their legal status.

Bishop Daniel Flores of Brownsville joined Valley Interfaith leaders to announce the program to a packed room of nearly 500 people at the Pharr Research and Development Center in Las Milpas in late September.

The bishop said the need for identification has a profound significance in people's lives — and more so for the marginalized immigrant.

"I would like to emphasize that the ID means something more than simply its implication that you have an identification, an address, a picture or something to show perhaps if you're stopped at a red light or for some other reason," Flores said. "It means something much deeper: 'I belong to a parish, and so in this community, I am not living in the shadows.'"

Several local officials joined in the effort, including police chiefs and officials from Pharr, Edinburg and McAllen. Emceeing the event, Oblate Father Kevin Collins, pastor of St. Eugene de Mazenod Parish in Brownsville, asked them to respond to three questions.

"While we know there is no substitute for a government-issued ID, could an officer in their discretion accept a photo ID — for example, of a school or a church ID — in order to identify themselves? That's first," the priest said. "Second, will you train your police officers to recognize multiple forms of ID?"

"Third, will you continue to work with us to build trust and to address crime together?" he asked.

The parish ID program originated about a year and a half ago in Farmers Branch, a suburb of Dallas.

"They noticed that very few people were going to Mass," said Joe Hinojosa of Valley Interfaith and a parishioner at Holy Spirit Parish in McAllen, recounting the origins of the program. "They asked the people why, and they said they were afraid to leave their homes."

So many of the residents of the city were without legal documents, they seldom ventured out other than to go to work or to the grocery store, and avoided contact with police even when they became victims of crime.

The police chief there was asked if his department would accept a local parish ID with photo, name and address, and the chief said yes, Hinojosa told The Valley Catholic, Brownsville's diocesan newspaper.

Today, some 10,000 people in the Dallas area are carrying the parish ID cards, Collins said. A similar situation exists in the Valley.

"We spoke with immigrant members of our parish, St. Eugene (de Mazenod)," said Rosie Hinojosa, a Valley Interfaith leader from Brownsville. "They are afraid to drop off their children at school or buy groceries.

"When we asked them what they most need, they told us they need an identification," she said. "Now that they know the diocese and their parishes are working with them on this strategy, we see hope in their faces."

Collins explained the card's limitations to the crowd.

"The ID is not a get-out-of-jail free card; it does not give you permission to drive; it is not a government ID in any way," he said. "It is simply an ID that says you are a member of the parish that's on there; your date of birth is there; your address is there. It expires. You must be a member of the church at least three months ahead of time before an ID will be issued."

During the meeting, Sr. Norma Pimentel, a member of the Missionaries of Jesus, who is executive director of Catholic Charities of the Rio Grande Valley, presented a check for $10,000 from that organization as starter money to finance the program.

Those issuing the cards will not be limited to Catholic parishes, Collins said. Other denominations and organizations also will be able to participate in the program.

"Too much of the focus is on the national and state conversation regarding immigration," said Franciscan Father Tom Luczak, pastor of Holy Family Parish in Edinburg. "This is a local strategy that gives my own parishioners the dignity of being able to identify themselves to a police officer.

"This will positively affect them. That is what excites me," Luczak said.

Read this next: Community ID program builds trust between migrants and police