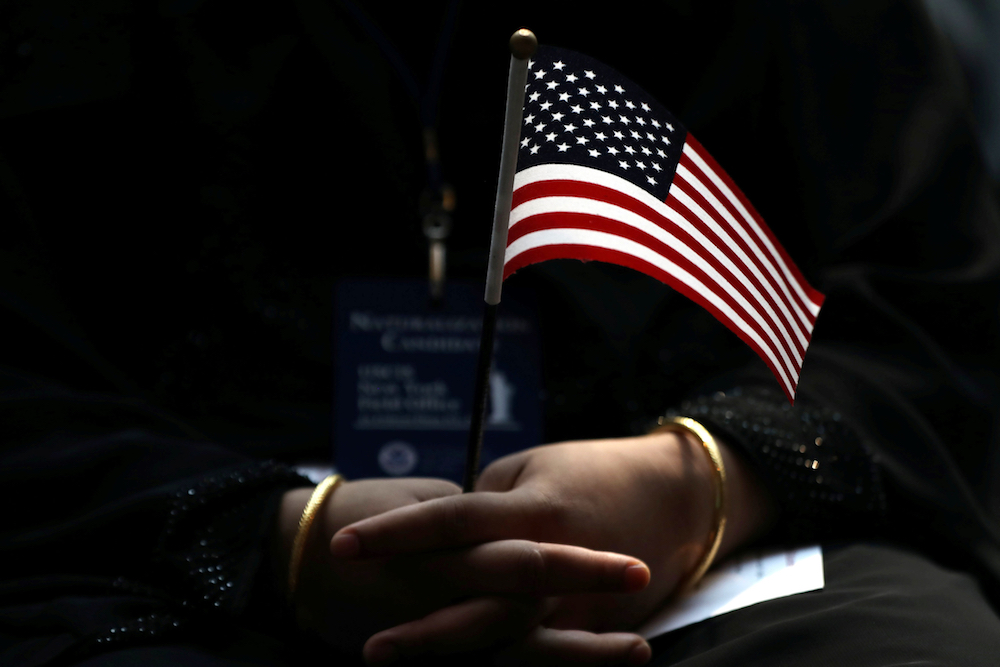 An immigrant holds a U.S. flag during a naturalization ceremony in New York City June 30, 2017. Laura Peralta-Schulte of Network lobby said that under a new rule about self-sufficiency requirements for immigrants, people who are citizens or permanent residents in mixed-status families could drop out of public assistance programs out of fear they might harm family members' applications for legal status. (CNS/Reuters/Shannon Stapleton)

A network of faith-based organizations is calling a new proposed rule for determining if prospective permanent residents risk being a burden on the public a "wealth test," said Jill Marie Bussey, director of advocacy for the Catholic Legal Immigration Network (CLINIC).

"We really feel like that sums it up," she said. "There's this battery of tests that they're proposing with one clear goal and that is to make our country open to the most wealthy."

In a statement Sept. 22, announcing the rule before it was published, Secretary of Homeland Security Kirstjen Nielsen said the proposed rule will "implement a law passed by Congress intended to promote immigrant self-sufficiency and protect finite resources by ensuring that they are not likely to become burdens on American taxpayers."

Although the rule, published in the federal register Oct. 10, doesn't include some provisions that provoked an outcry when earlier drafts were leaked to the public, it still penalizes immigrants for using certain public benefits, expands the categories of people who are subject to the "public charge" test and instructs officials to take income into account when processing legal permanent residency applications.

Advocates and social service providers are also already seeing a "chilling effect" caused by fear and misinformation that is leading immigrants who aren't subject to the public charge test or who use programs other than those listed in the new rule to disenroll themselves or their citizen family members from public benefits they are legally entitled to access.

Catholic groups are among those trying to spread accurate information about the proposed rule and encouraging individuals and faith-based groups to weigh in on the regulations during the 60-day public comment period, which lasts until Dec. 10.

Network, the Catholic social justice lobby, was asked to chair the faith outreach regarding the rule, said the organization's senior government relations advocate, Laura Peralta-Schulte. The lobby has been working with interfaith partners who focus on immigration as well as those that focus on access to housing, food or medical care.

"The impacts are felt not only on folks that are applying for their green card, it's really felt on the family, and I think that's why you're seeing such a strong solid reaction from our community," she said.

Network has also been working with legislators to make sure they and their constituents have the necessary information to take action, treating the issue as a bipartisan concern.

Bussey and Peralta-Schulte both said that current guidelines for determining someone's likelihood of becoming a public charge have worked well and shouldn't be changed.

"The goal here is to defeat the rule, not to make it better, necessarily," said Kevin Appleby, senior director of international migration policy at the Center for Migration Studies of New York.

Guidance issued in 1999 and kept in place until the present day defines a public charge as someone "who is likely to become primarily dependent on the government for subsistence." People applying for lawful permanent residency are required to prove they won't be a "public charge," while other groups, including refugees, asylum seekers and those applying for citizenship, are exempt from the test.

In recent decades, public charge determinations have focused on the requirement for prospective immigrants to have a sponsor who files an "affidavit of support" promising to provide for the immigrant, if necessary, and proving he or she can do so, along with caring for other dependents, at 125 percent of the poverty line.

The new proposed rule would change that, defining a public charge as "a person who receives certain public benefits above certain defined threshold amounts or for longer than certain periods of time," according to the DHS statement. Departing from previous practice, the rule also requires temporary visitors seeking to extend their stay — such as those here on student or temporary employment visas — to pass the public charge test.

It adds the Supplemental Nutrition Assistance Program (SNAP, formerly known as food stamps), non-emergency Medicaid, Medicare Part D, Section 8 housing assistance and public housing to the list of programs that will be heavily weighted against immigrants in public charge determinations.

The rule does not take a position on Children's Health Insurance Program (CHIP) and specifically requests comments about whether or not to penalize immigrants for its use. It also requests comments on how to address children's use of public benefits, since they may choose to disenroll from benefits or experience changed circumstances as they reach adulthood.

But some advocates say the guidance related to public benefits isn't even their greatest concern. Perhaps most worryingly, the rule also offers new guidance on assessing immigrants' "totality of circumstances" when making public charge predictions.

Under the new rule, having an income below 125 percent of the poverty line, being authorized and able to work but unemployed, and lacking employment history or prospects are considered heavily weighted negative factors. Being gainfully employed or otherwise financially supported at 250 percent of the poverty line or higher is considered a heavily weighted positive factor.

English proficiency, age, household size, education, health and skills are also factors that the new rule says officials should take into account. The rule doesn't offer a precise system for determining exactly how the various factors balance out, meaning advocates and attorneys have no idea how immigration officials will actually make decisions, which are ultimately left to their discretion.

"It's boggling to the mind for us to look at as practitioners who have to guide clients trying to determine their positive and negative factors, but also [for] the adjudicator who gets less than an hour to review an application," said Bussey.

The idea of using immigrants' financial resources to determine their status is also a major shift, some advocates said, and could change the demographics of who is allowed to migrate.

"We have never as a nation introduced an income test as the primary evaluation of whether or not … your presence in the U.S. is of value," said Peralta-Schulte. "From a faith perspective in particular, we think that it's really wrong to measure somebody's worth by the money in their pocket. … We've got to make sure that the wealthy are not privileged in this rule."

She sees the rule as part of the administration's overall goal of making immigration more merit-based, and focusing on technical skills and financial resources to determine merit.

"It's an insidious way for this administration to change the demographic face of our nation," said Appleby. "In order to gain membership you have to belong to a certain class, a certain race and a certain nationality."

"This rule really violates all aspects of Catholic teaching in that it undermines family unity, it attacks people because they're poor, and it is really anti-immigrant," Appleby said. "So it's really incumbent upon the Catholic community to respond forcefully in opposition to this rule, and that's happening."

While stricter than the guidance currently in place, the proposed new rule seems to have been substantially modified after public reaction to media reports on earlier drafts that were leaked in the past months.

Unlike in earlier drafts, immigrants will no longer be penalized for benefits used by their U.S. citizen family members. The new rule also clarifies that if finalized, it won't be retroactive; immigrants can stay on public benefits for the time being without having them considered in public charge determinations.

Bussey attributed the changes to the advocacy of groups like CLINIC as well as various municipalities and public sector institutions that weighed in, but she still expressed concern about what remains in the rule and the confusion that months of discussion of previous drafts has caused.

"It's hard to know what families will do. We just know that when there is uncertainty oftentimes people will overreact."

While many immigrants wouldn't even be eligible for most of the benefits listed until five years after they've passed the public charge test and become lawful permanent residents, the idea of making immigrants choose between assistance and future legal status in any case doesn't sit well with some Catholics.

"No family should have to make the choice between their immigration status and the stability of their family that's provided through having a lawful permanent status, and the public benefits that could keep them healthy, fed and sheltered," Bussey said.

"Studies show that over time immigrants become net contributors to the economy," said Appleby. "They don't drain the economy or drain public benefits at the expense of American taxpayers, but there are times when they may need assistance and life-sustaining services in order to move ahead, and what this rule does is it undermines that ability to sort of bridge that gap until they can become self-sufficient."

Advocates also worry that the guidelines will scare immigrants away from using benefits that wouldn't harm their chances of getting permanent legal status. The WIC association is already seeing women return breast pumps they received through the program, even though WIC isn't listed in the published rule, said Peralta-Schulte.

Citizens or permanent residents in mixed-status families could also drop out of programs out of fear they might harm family members' applications, she added, especially because the rule gives broad discretion to officials and doesn't make it clear what happens when an immigrant benefits from something another family member receives, such as subsidized housing.

"It's hard to know what families will do," said Peralta-Schulte. "We just know that when there is uncertainty oftentimes people will overreact."

Bussey recently attended a community event where she encountered prospective citizens who thought the guidelines applied to them and were planning to drop out of benefit programs. Many asylum seekers and refugees, who are similarly exempt from the test, are equally confused, she said.

"People should access the benefits they need in order to support their families and feed their families," she said. "I think it's important to get that information out to the community because that chilling effect is very real and we want to make sure that people are not suffering."

A version of this story appeared in the Nov 16-29, 2018 print issue under the headline: Immigrant advocates say proposed benefits rule is a 'wealth test'.