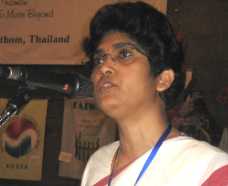 Chennattu said the time has come for women religious to leave what she described as a culture of “command and control” and enter one built on “service and friendship.”

Her remarks were delivered at AMOR XV, a gathering which has drawn together women religious leaders from throughout East Asia and Oceania.

Chennattu, who holds advanced degrees in scripture studies from Pontifical Biblical Institute in Rome and Catholic University of America in Washington, described religious formation as a “never-ending dynamic process.”

“Religious by nature are called to bring about its dynamic permanent renewal,” she said.

“We live in a fast changing world and the only thing that is constant in this world is change. The old style of leadership as ‘command and control’ is outdated and cannot work today.

The friendship model of leadership seems to be the most appropriate and adequate model for religious communities, as we are consecrated to be sisters and friends.”

She based her egalitarian call on the gospel story of Jesus’ encounter with the Canaanite woman, a piece of scripture that has served at the anchoring text for a nine-day meeting at a conference center 30 miles outside of Bangkok.

Her point was that women religious today need to be daring and active dialogue partners.

“What does it entail when we say religious women are called to appropriate a new paradigm of religious life? she asked.

Then, before answering her question, she admitted that a move to the new paradigm will likely mean that “inadequate communities may die or merge into newer communities.”

She then listed six calls that women religious today are being asked to respond to:

1.t“We are being called out of piety and ritualism into deep communion and communication with God, which results in a vibrant spirituality that is nurtured by the experience of the Paschal mystery in our daily life, made relevant in constant interaction with the challenges of present society and sustained by ongoing renewal (metanoia) in our way of life.

2.t“We are being called out of individualism and personal perfection into community living and sharing of our resources and talents. We are called out of our secure and fixed community into an alternative prophetic community bound by love and lived in common mission.

4.t“We are being called out of our faithfulness to a set pattern of life into a dynamic process of integral formation.

5.t“We are being called out of our secure and safe environments into newer and deeper commitment in favor of God’s choices, witnessing to Jesus’ identification with the poor, his blazing anger at injustice, human rights violations and discrimination against women, and his passion for God’s reign (prophetic mission).

6.t“We are being called out of control and domination into an empowering friendship model of leadership and shared responsibilities in religious life.”

Meanwhile, she said that women religious will not be able to respond to these demanding calls unless they “develop a deeper spirituality, one “which liberates us from the slavery of our occupation and preoccupations and enables us to be attuned to the voice that transforms us constantly and makes us anew.”

A deep and authentic spirituality is required if women are to respond to these calls, she said. It is a spirituality that grows out of an authentic prayer life. She added that “regularity in prayers or observance of the rituals should not be confused with the deepening of spirituality.”

“On the one hand, prayer is not merely something that we do in certain formal moments set aside for prayers – saying rosaries or praying with psalms. These are important and necessary means, but should not to be confused with the goal, the spiritual life or spirituality.

On the other hand, the claim that ‘work is prayer’ is also misleading. One needs to spend quality time with oneself in the presence of God to hold the different aspects of consecrated life together.”