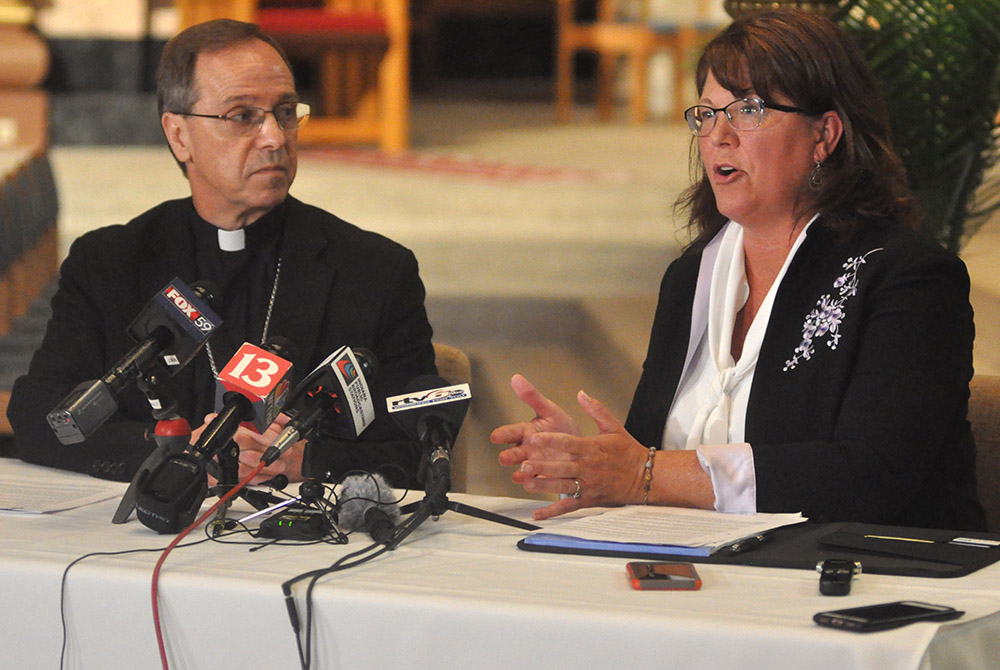 Indianapolis Archbishop Charles Thompson looks on as Gina Fleming, superintendent of Catholic schools for the Archdiocese of Indianapolis, speaks during a news conference June 27, 2019, at Sts. Peter and Paul Cathedral in Indianapolis. (CNS/Sean Gallagher, The Criterion) 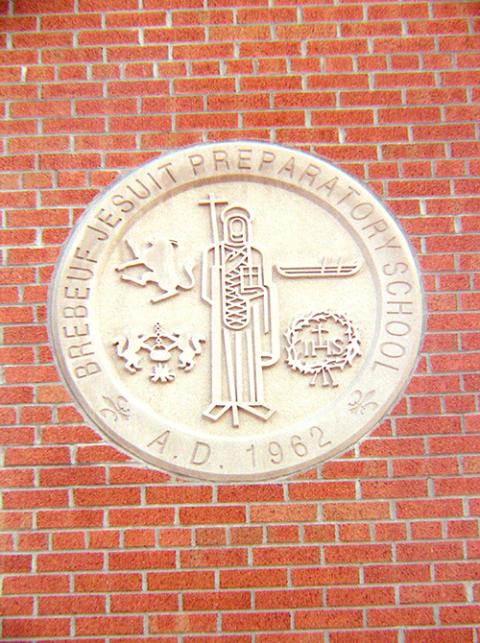 An emblem is seen in an undated photo on Brebeuf Jesuit Preparatory School in Indianapolis. (CNS/Brandon Evans, The Criterion)

One year after the Indianapolis Archdiocese attempted to strip a Jesuit school of its Catholic affiliation after its unwillingness to fire a gay teacher, the archdiocese has issued new guidelines warning that transgender students may not be allowed to enroll in its Catholic schools.

The document, obtained by NCR, was signed into effect on June 8, and distributed to internal archdiocesan employees on June 17.

The eight-page document, "Policy and Complementary Norms on Sexual Identity in School Ministries," was signed by Archbishop Charles Thompson and Chancellor Annette Lentz and draws heavily on a controversial 2019 document from the Vatican's Congregation for Catholic Education, "Male and Female He Created Them: Towards a Path of Dialogue on the Question of Gender Theory in Education."

While the policy recommends a "case by case" approach to dealing with questions of sexual identity, it notes that students experiencing confusion regarding their sexual identity may be admitted to Catholic schools if they follow church teaching, yet it warns that "any student whose 'gender' has been legally changed from their biological sex, or who has chemically and/or surgically altered their given biology, may not be eligible for enrollment."

The policy requires that students are addressed using "the pronoun correlating to their biological sexual identity," and that any use of facilities such as locker rooms, bathrooms, and overnight accommodations must be utilized based on one's biological sex.

The document is divided into four sections focusing first on the biological distinctions between individuals with "chromosomal/genetic abnormalities" versus those experiencing "gender dysphoria," followed by a section on church teaching on sexual identity, a third section on the role of ministers and educators, and a final section on the practical applications of the policy.

The focus of the policy, it notes, is not to concern itself with cases of individuals who have biological abnormalities (commonly known as "intersex" individuals, although the document does not use the term), but rather cases "when there is a clear biological determination of a child's sexual identity, yet the individual seeks to legally, chemically and/or surgically alter the given biology."

The document does not use the term transgender to describe such individuals, stating that "the sexual identity of a person as either male or female is a fundamental principle of Christian anthropology."

"It is important to note that when an individual decides to partake in such alteration, this does NOT change the fact that he/she is deserving of dignity as a child of God, made in His image and likeness," the policy states. "The person remains a person of God even when the decisions or acts of that person are contrary to Church's teachings."

"Any student whose 'gender' has been legally changed from their biological sex, or who has chemically and/or surgically altered their given biology, may not be eligible for enrollment."
—"Policy and Complementary Norms on Sexual Identity in School Ministries"

Also included in the policy is the expectation that Catholic ministers and faith formators be "sufficiently prepared regarding the intricacies of the various questions," as well as the recommendation that they be informed about ongoing legislation pertaining to such matters.

Should a young person "experience dissonance between their biological sex and the roles and norms advocated by society," the new archdiocesan policy recommends that they, along with their parents, bring the issue to the attention of a pastor and trained professionals "who might best assist them in clarifying and defining issues of self (and sexual) identity in accord with Catholic Church teaching."

The policy also states that an Archdiocesan Consultation Team, known as "ACT," will be made up of "a group of professionals from a broad range of disciplines" to aid in the accompaniment of young people.

A June 17 email sent to archdiocesan officials and obtained by NCR states that the document has been completed following a "thorough review and revisions from USCCB [United States Conference of Catholic Bishops]."

"THIS POLICY IS NOT TO BE INCLUDED IN FACULTY/STAFF OR PARENT/STUDENT HANDBOOKS," it continues. "It is intended as an internal policy with complementary norms."

The Archdiocese of Indianapolis did not respond to NCR's repeated requests for comment.

Despite the fact that the document says the new norms are meant to be "reflective of the commitment to a culture of transparency and understanding throughout the Archdiocese of Indianapolis," the decision not to make the policy public is being criticized by Francis DeBernardo, executive director of New Ways Ministry, who told NCR that "church officials should have learned from the clergy sex abuse crisis that secrecy only causes more problems."

He also faulted the archdiocese for ignoring "scientific research into gender, gender identity and transgender reality," and only citing Vatican documents, rather than engaging the latest scientific studies.

"Officials should have learned from the clergy crisis that ignoring the secular world's scientific and legal knowledge only multiplied the damage they were trying to contain," he said.

The Indianapolis archdiocesan policy comes as Catholic schools across the world are implementing a range of policies on related issues.

In February, Bishop Thomas Paprocki of Springfield, Illinois, issued a new policy that allowed for the possibility of the "immediate corrective action, suspension, and possible termination" of transgender students or workers. In June 2019, the bishops of Minnesota issued new "guiding principles" on sexual identity, and similarly, in 2016, the Diocese of Little Rock published a manual instructing students to conduct themselves "in a manner consistent with their biological sex."

At the same time, a Catholic school in Rhode Island reversed a policy in 2016 that banned transgender students, and a school in Kent, England, issued new accommodations for such students.

In February 2017, the National Catholic Bioethics Center hosted a three-day conference attended by more than 100 U.S. Catholic bishops to discuss a range of emerging bioethical concerns, which included sessions on how new federal guidelines on transgender individuals affect Catholic institutions.

More than half of the footnotes in the Indianapolis policy come from the 2019 Vatican document on gender identity, which was widely criticized by Catholic LGBT advocates, both for its substance and for the timing of its release during the month of June in which Pride events are typically celebrated within the LGBT community.

At the time of its publication, Jesuit Fr. James Martin, author of Building a Bridge: How the Catholic Church and the LGBT Community Can Enter Into a Relationship of Respect, Compassion, and Sensitivity, said the document "rightly calls for 'dialogue' and 'listening,' but sets aside the real-life experiences of LGBT people."

In October 2019, Martin met with the prefect for the Congregation for Catholic Education, Cardinal Giuseppe Versaldi, during which he discussed the document and its reception among LGBT Catholics.

"His Eminence expressed sorrow if people thought the Congregation was accusing people of being ideologically distorted, and they wish to share their care for transgender people and want to continue dialogue to reflect on their experiences," Martin wrote after the meeting.

A version of this story appeared in the July 10-23, 2020 print issue under the headline: Indianapolis Archdiocese's new policy may bar transgender students.