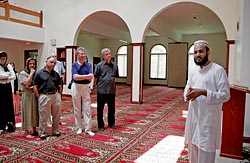 WASHINGTON -- In the 10 years since terrorists launched their attacks on America Sept. 11, 2001, relations among Christians, Jews and Muslims have improved by some calculations, but worsened in other ways.

"On the one hand, I think with some people they've never been better," said Atonement Father James Gardiner, whose order focuses on reconciliation and dialogue with other faiths. "We've made friends, we don't suspect one another, in many places we're welcomed even if we're just snooping on how one another worships.

"On the other hand, I'm on an email list from someone who purports to be a religious person. The best way I can describe the email reports are scurrilous," Father Gardiner told Catholic News Service. "The reports are uninformed. Some of this came out (last year) with the Islamic center controversy in lower Manhattan. A lot of us have been disappointed by the reaction to it."

Corey Saylor, a Muslim layman who is spokesman for the Council on American Islamic Relations, concurred.

"Most people were introduced to the Islamic faith on Sept. 11 when planes began to fly into buildings," he said. "Media coverage has highlighted a warped version of Islam," he added. "The good guys doing the work aren't getting the coverage."

The American Muslim community, according to Saylor, is "totally indebted to people in the Christian, Jewish and other interfaith dialogues for people who have been very vocal in standing up for American principles. I don't know how long it will take us to repay that debt."

Father Paul Lee, director of interfaith relations for the Archdiocese of Washington, explained the seeming contraction this way: "Beyond the more clash-of-civilizations approach, the more sensationalized and ideologically and politically charged statements, this strange relationship between Islam and the Western world goes a long way. Colonialism probably has a lot to do with that. The economy has something to do with it, and the lack of meaningful interaction, and the political reasons, and religious (reasons), too.

"Theologically, there is more unilateral judgment on each other and less talk in understandable terms."

"After 9/11 it's become of greater importance to engage in the broader sector of Islam for better understanding," Rabbi Schneier, a Holocaust survivor, told CNS. "I think there's more knowledge today of what Islam is all about, both in the United States and in Europe. Certainly this is due to 9/11."

The founder of the Appeal to Conscience Foundation, which specializes in interfaith work, Rabbi Schneier said he figured that because he survived the Nazi concentration camps, "the Lord saved me for a purpose. So I energized religious leaders of all faiths. ... We swim together and we sink together. On the other hand, one should not be naive."

In assessing U.S. interfaith relations compared with what he's seen around the world, Rabbi Schneier said, "You'll find that in a way we don't have some of the burdens that France and Germany and Europe face ... Italy, with the major immigration coming from the Middle East and North Africa which creates societal tensions and problems. The challenge and lessons of 9/11 for those who believe in coexistence -- Christian, Jewish, Muslim, Buddhist, whatever -- are we need to rally and take a stand against those who would divide us, those who use religion to try to advance their terrorist aims."

Father Robert Robbins, director of the Archdiocese of New York's commission on ecumenical and interreligious affairs, has already been thinking about the upcoming 10th anniversary.

Commemorations of the anniversary "are not 'celebrations.' They are 'remembrances' of a day of untold death and violence," he said in an essay, "The Tenth Anniversary of the World Trade Center Disaster." Interreligious gatherings, Father Robbins added, "should respect each tradition's sacred writings as valid in their own right. The usual 'red herring' of Christians not being able to pray side-by-side with Jews and Muslims belies the fact that we are all 'children of Abraham' and 'people of the Book.'"

He also prefers "September 11th" rather than the shorthand "9/11" to note the occasion. "To use '9/11' is impersonal and robs the day of its humanity," Father Robbins wrote.

Imam Yahya Hendi, a campus minister at Georgetown University in Washington -- believed to be the first full-time Muslim campus minister at a Catholic college -- said that, on the subject of interfaith relations, "I dare to see a pitcher half-full, not half-empty.

"You can talk about the pastor who wanted to burn the Quran in Florida. You can talk about some right-wing ministers who made negative comments about Islam. But I believe these are isolated cases when you look at the bigger picture," said Imam Hendi, who spoke to CNS from Kabul, Afghanistan, where he was on a speaking tour. "Christians and Muslims are much more intensely engaged after Sept. 11 than I have ever seen or have even expected."

Father Lee, from the Archdiocese of Washington, said he was not familiar with interfaith dialogues at the parish level within the archdiocese. But he noted the Interfaith Alliance, located in the city, engages in several activities each year, including an annual 9/11 walk.

In Newark, N.J., a Muslim businessman, Levent Koc, runs the Interfaith Dialog Center with a wide array of activities, including study tours to Turkey, a secular Muslim nation often viewed as a bridge between East and West.

"We've made remarkable progress and at the same time we still have a long way to go," Father Lee said. "It's not just a simple state of progress. Sometimes we go two steps forward and one step back. Unexpected things happen. It's building relationships, friendships, first. Getting together regularly is important. Then we can tackle the tougher issues, theologically and otherwise."