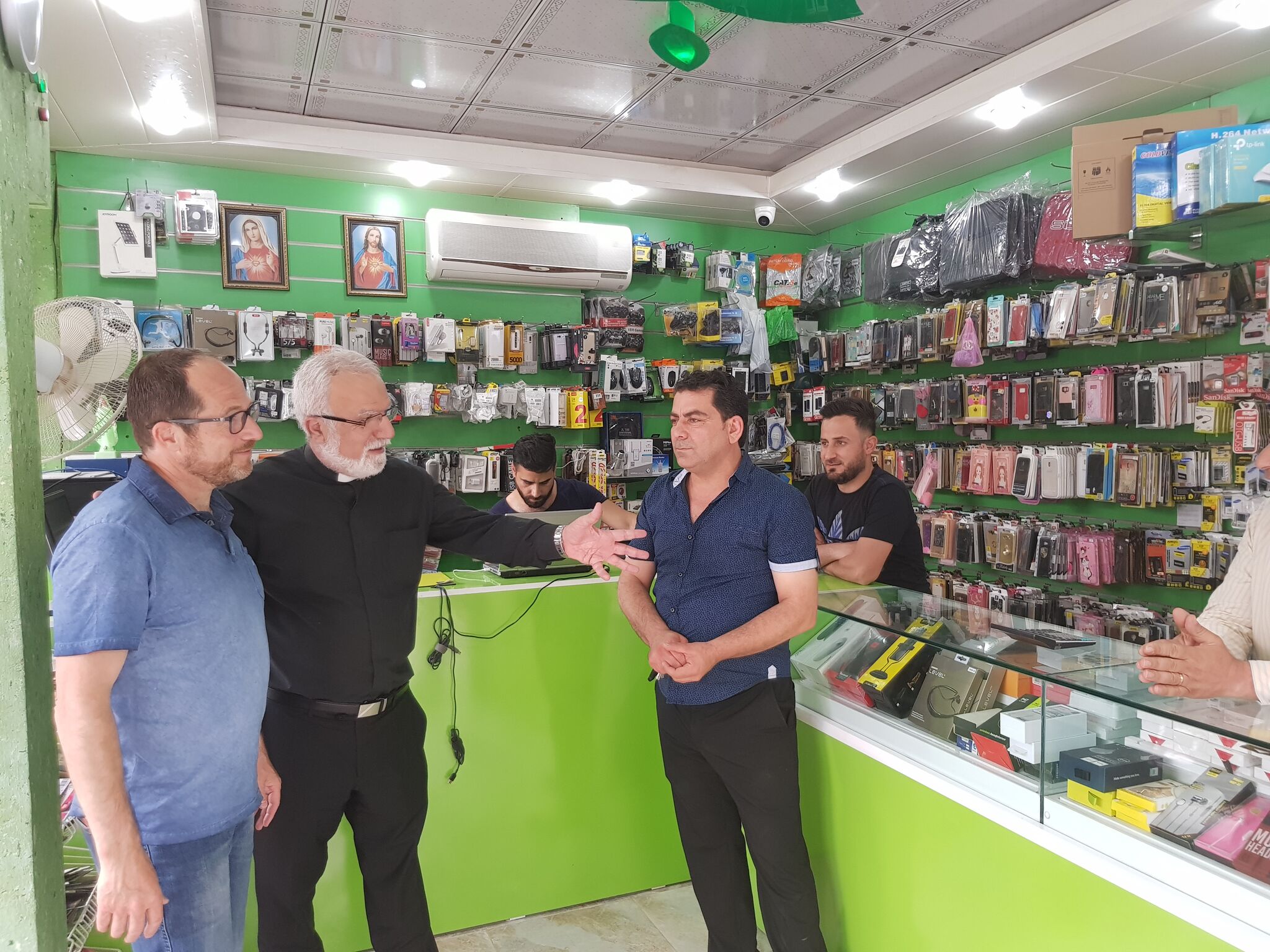 Father Emanuel Youkhana, center, meets Iraqi Christians who have opened a mobile cellphone shop in the Ninevah Plains following the defeat of the Islamic State from the area. (CNS/courtesy CAPNI)

In the aftermath of Iraq's elections, Christians want to see a government formed that is free from the sectarianism that has torn apart the country, and they want Iran's influence to diminish. Both issues have played a huge role in politics since the 2003 U.S.-led invasion.

Fr. Emanuel Youkhana, a priest, or archimandrite, of the Assyrian Church of the East, told Catholic News Service that although fiery Shiite cleric Muqtada al-Sadr has gained the majority of parliament's seats, al-Sadr's uncompromising nationalism, stand against corruption and against foreign meddling seem to have struck a chord among ordinary Iraqis, who are fed up with what many call Baghdad's broken political system.

"Iraq's Shiite politicians, whose population forms the country's majority, are of two streams: one pro-Iran and the other freer from Iranian influence, and Sadr is the leader of this latter group," the priest explained.

"Al-Sadr has called for a Cabinet of technocrats, not politicians. So far, he is more acceptable with the public because of his slogans. But can he realize forming a coalition government? In Iraq, it's very complicated," Youkhana said.

Youkhana runs the Christian Aid Program Northern Iraq or CAPNI, for displaced Iraqis around the city of Dohuk, in addition to rebuilding homes and restoring livelihoods in several towns in the Ninevah Plain following its destruction by Islamic State since 2014.

Iraq's historic Christians and other religious minorities, such as the Yezidis, are also dismayed that the government has so far failed to address and counter the problems that led to the rise of the Islamic State in the first place.  And it has not contributed to rebuilding efforts in their communities.

"Now in Germany or the U.S., if a situation happens two or three times, they call for a debate in Congress. But in Iraq, it's now four years from what happened, and there has been no national debate on what took place, how it happened, and how to prevent it from reocurring," the priest said.

Yet, Iraqi Cardinal-designate Louis Sako, the Chaldean Catholic patriarch, has repeatedly called for a serious national dialogue to combat sectarianism in his homeland. So far, those calls seem to have gone largely unheeded.

Iraq's military and police abandoned Christians and Yezidis in the face of the brutal attacks by Islamic State in 2014 that saw thousands killed, kidnapped, turned into sex slaves, maimed and displaced. The United Nations deemed the Islamic State the perpetrator of a genocide against the Yezidis of Iraq.

These events have left Iraq's rich cultural mosaic of religious minorities feeling that they are second-class citizens. They sense that Iraq's political leaders do not represent their interests or concerns.

Iraq's Christian population, believed to number up to 1.4 million in the late 1990s, now is estimated to be fewer than 500,000. They have been victims of sectarian violence, driven out of their ancestral homeland. Almost two-thirds of Iraqi Christians belong to the Chaldean Catholic Church.

They worry that Shiite militias that fought Islamic State militants are staking claim to parts of the historic Christian Ninevah Plain, where they never before resided.

"Bartella is becoming a Shiite town," said Youkhana. "Now when you enter Bartella, you see the photos of (Iran's ayatollahs) Khomeini and Khamenei. This demographic change is protected and facilitated by the militias," he said. "This is our concern."

"The failure of the government goes beyond the material," said Youkhana, referring to the Iraqi government's lack of funding or efforts to rebuild the ancestral areas destroyed by the Islamic State militants where Christians, Yezidis and other religious minorities historically have lived.

Most of reconstruction of these areas have been undertaken by Western governments and various Christian agencies, such as CAPNI, Catholic Relief Services and Caritas.

"I would also partially blame the church for giving the impression that we can do it ourselves. But the reality is that the church single-handedly doesn't have the resources for that," the priest said.

"People have been hesitating to return (to their towns) unless the government provides safety guarantees, but so far it hasn't, and I'm not sure if the new Cabinet will do so," Youkhana said. "I call for a mini-Marshall Plan."

CAPNI has rebuilt 28 schools and some 300 partially damaged houses in Qaraqosh, Bartella, Bashika and Bahzani. He said these partially damaged homes are the focus of rebuilding efforts by Christian aid groups and Western governments, such as Germany and Hungary, to reinstall electricity, doors, windows, etc. Health centers also are being rehabilitated.

Youkhana estimates that about 40 percent of such houses have been reconstructed. Others, which have been burned or completely destroyed, are not being rehabilitated by relief groups.

"Houses are being rehabilitated, but still people need to have livelihoods" if the towns are to be viable, he added.

So far, an estimated 25,000 people have returned to the area's main town of Qaraqosh, which once housed  50,000 Christians.

Sura Jamiel Hanna, who heads CAPNI's community development work, said the group provides loans and grants for income generating projects to revive some 20 livelihoods for Christians, Yezidis and Muslims in the towns such as beekeeping, sheep raising, carpentry and hairdressing.

CAPNI, in conjunction with Jesuit Worldwide Learning, also provides English language courses as well as 13 others such as management, math, and ethics for those who already possess proficient English skills.

Teaching of Kurdish to Arabic-speakers, music, sports and studies on Eastern Christianity are also offered.

"This is important for us as a matter of identity," Youkhana said of the latter, adding that advocacy is now vital for Iraq's minorities to realize their rights in both school curriculum and national and local legislation.

"This is the way to address the roots of the problem," he said of Iraq's troubling sectarianism.  "We are fighting to keep the hope of our people alive."