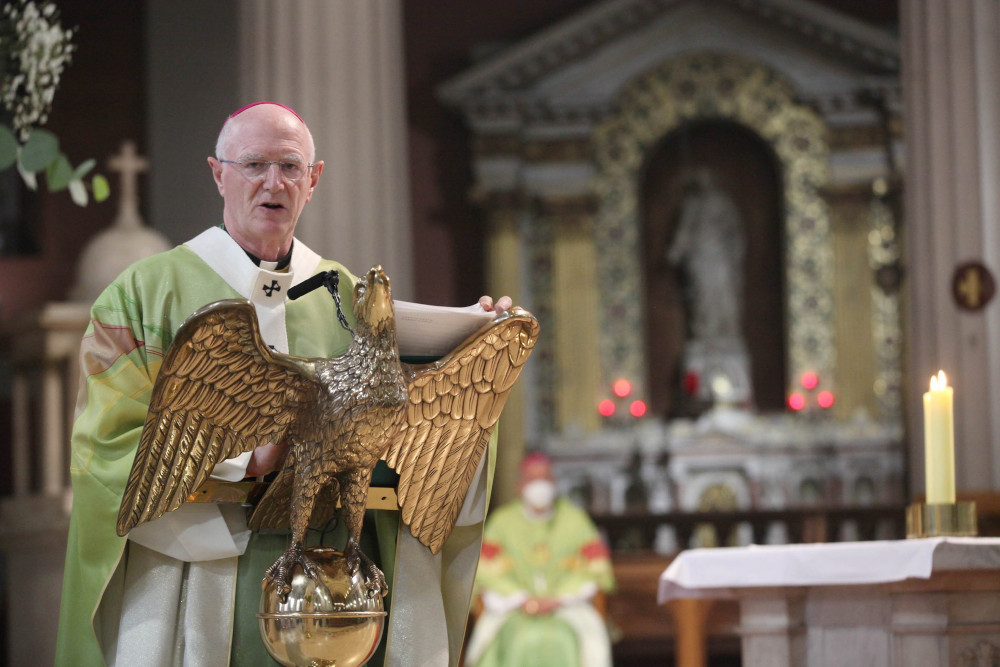 Archbishop Dermot Farrell of Dublin, shown receiving his pallium at St. Mary's Pro Cathedral Aug. 7, 2021, has criticized the "pathetic responses" to victims of clergy sexual abuse and the "whitewashing" of crimes in the wake of the latest abuse scandal to rock the Irish Church. (CNS photo/courtesy John McElroy)

Archbishop Dermot Farrell of Dublin has lashed out at the "pathetic responses" to victims of clergy sexual abuse and the "whitewashing" of crimes in the wake of the latest abuse scandal to rock the Irish Church.

Speaking during Mass Nov. 21 in Blackrock parish in Dublin, where the Spiritan order's Blackrock College is located, the archbishop said the courage of abuse survivors must be matched by "our unflinching commitment to listen to the survivors and respond in truth and in justice to all of them."

A radio documentary titled "Blackrock Boys" aired on the national broadcaster RTE Nov. 7. It told the story of siblings Mark and David Ryan and their abuse by Spiritan Fr. Tom O'Byrne at Blackrock College in Dublin in the 1970s and 1980s.

Following the broadcast, a number of fresh allegations of abuse were made by former Blackrock College students and the other nine schools linked to the Spiritans in Ireland.

The congregation, formerly known as the Holy Ghost Fathers, has been criticized in recent days for sending priests against whom allegations were made in Irish schools overseas to Canada, Kenya, Nigeria and Sierra Leone.

The anger and revulsion over recent revelations of "horrendous sexual abuse of children" by members of the clergy or religious communities is understandable and entirely justified, Farrell said.

"Too often, those in leadership in dioceses and religious orders have failed to safeguard those entrusted to their care, whether through ignorance, misplaced loyalty or a sense of self-preservation," he said.

The archbishop added that despite the many reports and serious findings on abuse in Ireland, the recent revelations of predatory behavior, abuse and neglect inflicted on so many children are still "truly shocking."

In a statement, Fr. Martin Kelly, Spiritan provincial, said a review in 2012 by the National Board for Safeguarding Children in the Catholic Church in Ireland revealed that 48 members of the Irish Spiritans had abused over a 50-year period. The number has now reached 77.

Almost 300 people have contacted the congregation, which has spent more than $5 million in settlements since 2004.

Kelly said it was clear that "there are many more past pupils who were abused and who have not yet come forward."

Mark Vincent Healy, who was abused by two priests from 1969 to 1973 during his time at another Spiritan school, St Mary's College in Dublin, has called for an independent inquiry to determine the scale of abuse in schools run by the religious congregation.

Healy, who was the first Irish male survivor of abuse to meet Pope Francis in 2014, recounted how one of his abusers was stationed at Blackrock College for a time as well as at Rockwell College in County Tipperary. The same abuser also is accused of abuse in Sierra Leone, where he was stationed following allegations by five families in 1973.

"I have no doubt there are considerably more cases," Healy said.