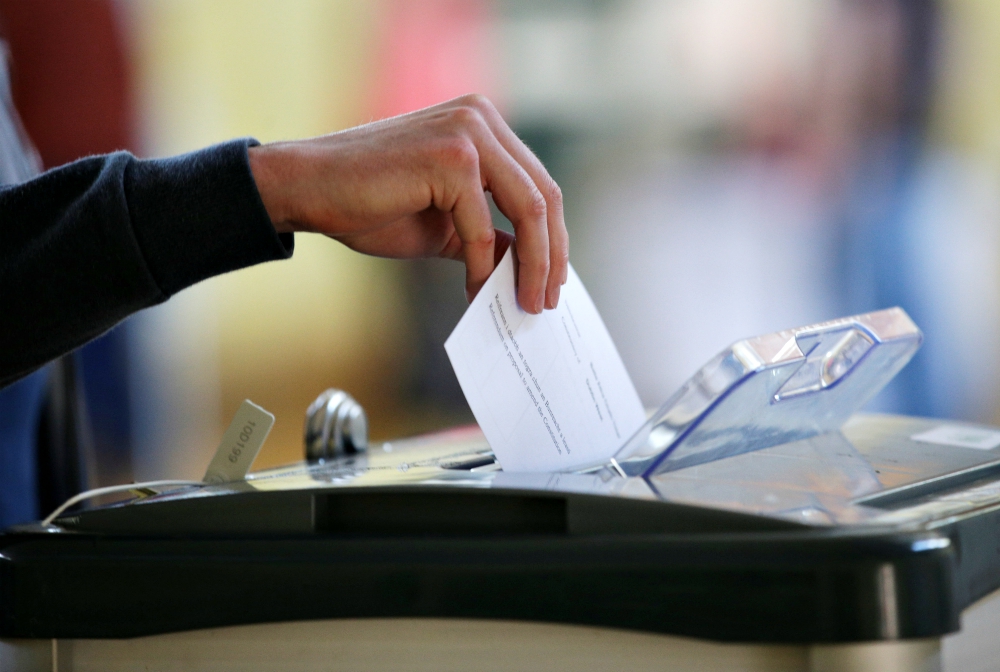 A voter casts his ballot May 25 in Dublin as Ireland holds a referendum on its law on abortion. (CNS/Reuters/Max Rossi)

Legislation to regulate abortion in Ireland will be passed by the end of the year following the electorate's overwhelming vote to repeal the country's current ban in the May 25 landmark referendum.

The government, which led a cross-party campaign for a yes vote to overturn the Constitution's pro-life Eighth Amendment, wants abortion services to be introduced in January 2019.

Some 723,632 (33.6 percent) voted against the proposal. County Donegal in the northwest corner of the country was the only constituency to have a majority that rejected repealing the contentious amendment.

Responding to the referendum result, Archbishop Eamon Martin of Armagh said he was "deeply saddened."

"We appear to have obliterated the right to life of all unborn children from our constitution," the archbishop told pilgrims at the Knock Shrine in County Mayo May 27, warning that the country was now on the brink of legislating for a liberal abortion regime.

He acknowledged that "we are living in a new time and a changed culture," as the level of support for repeal, which exceeded the expectations of yes campaigners, began to sink in.

Meanwhile, at the national seminary in Maynooth on May 27, Archbishop Diarmuid Martin of Dublin said many would see the outcome as an indication that the Catholic Church in Ireland has a marginal role in the formation of Irish culture.

A referendum exit poll conducted by national broadcaster RTE showed that almost nine out of 10 no voters were Catholic while seven out of 10 yes voters were also Catholic.

That so many Catholics were willing to disregard the church’s teaching on abortion was seen by media pundits as another nail in the coffin for Irish Catholicism. Even the country’s most senior bishops seemed ready to concede this.

"Over many years, we have seen a drift away from practices of our faith in our congregations and parishes and a lower degree of involvement from people," Eamon Martin told RTE Radio's "This Week" program. "This abortion referendum now confirms we are in a new space."

Since the insertion of the Eighth Amendment into the Irish Constitution in 1983, six referendums have grappled with the issue of abortion.

The clarity of the May 25 vote left little room for doubt that the majority of people in Ireland now want the amendment deleted. It will be replaced with a new article stating that "provision may be made by law for the regulation of termination of pregnancy," thereby handing power to politicians to determine the nature of the country's abortion laws. 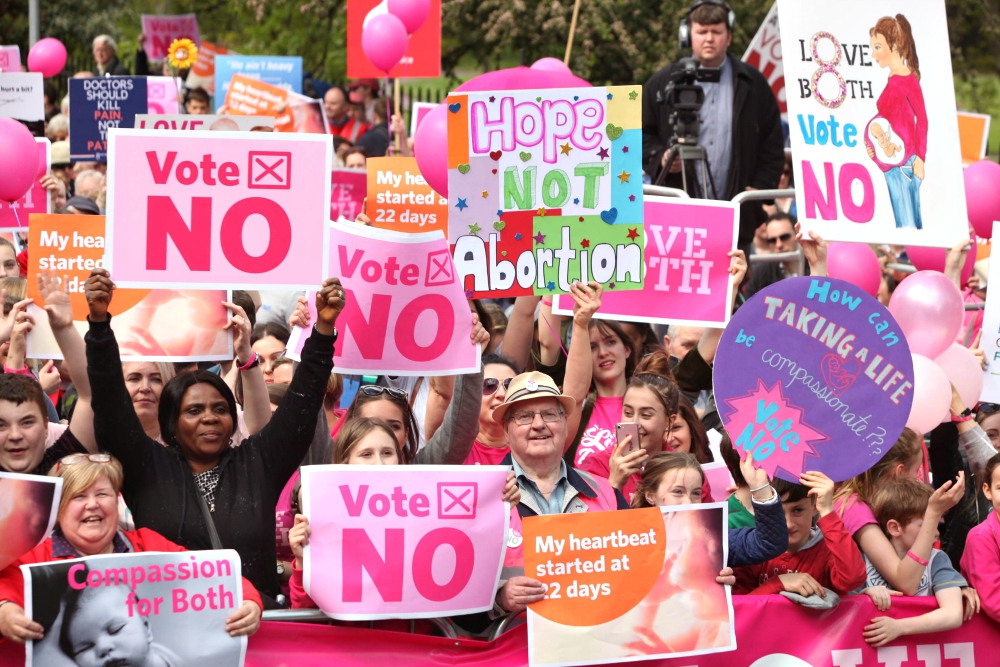 Thousands gather in Dublin May 12 to say "Love Both" and "Vote No" ahead of the referendum to repeal Ireland's abortion ban. (CNS/John McElroy)

The referendum result is almost an exact mirror of the 1983 referendum, which saw the Irish electorate vote by a margin of two to one to insert the Eighth Amendment into the constitution.

Until President Michael D. Higgins signs the new legislation into law in the fall, abortion in Ireland will continue to be governed by the Protection of Life During Pregnancy Act 2013, which bans abortion except when there is a risk to the life of the woman, including a risk of suicide.

The 2013 act came about 21 years after the Supreme Court ruled in the infamous 1992 Attorney General v. X case that a 13-year-old child, who was pregnant as a result of rape by an adult, could be permitted to obtain an abortion.

Calls for Ireland to legislate to give effect to the X case ruling were compounded by public outrage over the death of 31-year-old Indian dentist Savita Halappanavar in 2012, who was denied an abortion, though she requested one, while suffering a septic miscarriage.

Ireland's strict abortion law resulted in up to 3,265 Irish women traveling to Britain for an abortion in 2016. Another 1,642 women that same year are believed to have taken abortion tablets that they purchased over the internet. Self-medicating in secret has raised concerns over the possibility of a woman dying due to lack of medically supervised abortion. The yes campaign argued that abortion was already happening in Ireland, but illegally.

The new legislation governing abortion will provide for unrestricted access to abortion for up to 12 weeks of pregnancy through a doctor-led service that will supervise the taking of abortion pills. Abortion will also be accessible up to 24 weeks on the basis of concerns for the health of the mother, and up to birth where the child is diagnosed with a life-limiting condition or fatal fetal abnormality.

A number of groups representing health care workers and medical professionals sprung up ahead of the vote, highlighting the concerns of doctors unhappy with the prospect of being coerced into offering abortion services contrary to their principles. But their concerns failed to convince the majority of voters.

One prominent Catholic who voted yes was Brendan Butler, spokesperson for the church reform group We Are Church Ireland. He told NCR that the outcome represented "a seismic shift in Irish public opinion on such a divisive issue."

"I voted yes after deep reflection and especially after listening to the stories of women who because of pregnancy due to rape and incest or to a fatal fetal anomaly were forced to travel to England [for an abortion], often without family or local medical support," he said.

"As a nation, we have been paraded around the world as a country which officially had no abortions unless the lives of mothers were threatened with death. I voted yes because I wanted to end the hypocrisy," he said. He also referred to the "unnecessary death of Savita Halappanavar."

Many Catholic voters who opted to vote yes were shocked on May 28 to hear Bishop Kevin Doran of Elphin accuse them of sinning by supporting repeal on RTE Radio's "Today with Sean O'Rourke" program.

"If they knew and intended abortion as the outcome — yes — I believe so," Doran said, referring to voters committing sin. Doran, chair of the Irish bishops' bioethics committee, also suggested these Catholics should consider going to confession.

Responding to Doran's comments, Butler told NCR the bishop was "condemning 66 percent of the Irish electorate to hell for voting to allow women make a conscientious choice."

"Irish Catholics have been scandalized so much over the past years by the actions of the institutional church that they do not trust their advice anymore," Butler said. "Bishop Doran's comment will further alienate Catholics from the ecclesiastical church." 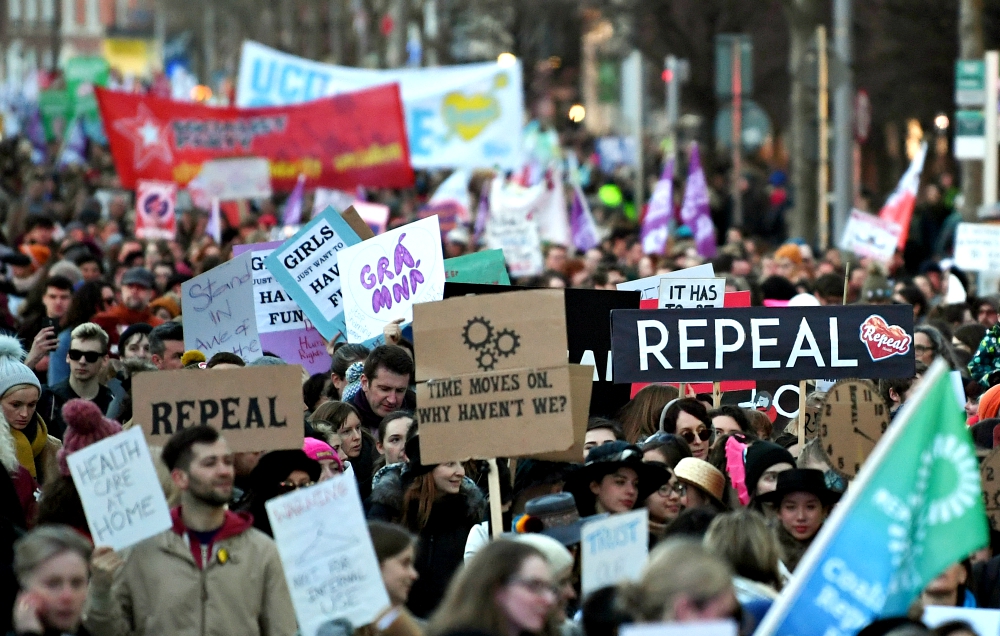 Popular BBC broadcaster and Sunday World columnist Fr. Brian D'Arcy told RTE Radio's "Drivetime" program that he wouldn't like to attribute sin in the matter of how people voted.

Jesuit theologian Fr. Gerry O'Hanlon told RTE News that he had difficulty with Doran's comments and referred to Pope Francis' recent statement that bishops have been called on to form consciences, not to replace them.

"I know many good Catholics who agonized over this and I think the church's proper response is to respect their intelligence and to show the kind of compassion to women that has been lacking in the past," O'Hanlon said.

Tina Beattie, professor of Catholic studies at the University of Roehampton in London and director of the Digby Stuart Research Centre for Religion, Society and Human Flourishing, believes a yes vote is not cause for celebration.

Abortion, she said, is "traumatic and involves the deliberate taking of human life. It should be, as Hillary Clinton once said, rare, legal and safe. The challenge in Ireland now is to make sure it is all those things, and that means providing the kind of society that makes it possible to have a child in difficult circumstances."

That view was echoed by the country's two leading Catholic churchmen. Diarmuid Martin urged the Irish church to renew its commitment to support life. "The church is called to be pro-life in deeds," he said.

Eamon Martin underlined that women will continue to face crisis pregnancies, and new ways must be found of supporting them and their unborn children. "What new supports, apart from the option of abortion, will be in place for mothers and fathers at the point of crisis?" he asked.

Leading pro-life campaigner David Quinn of the Iona Institute stressed on May 27 that the pro-life movement is here for the long haul, as it is in many other countries. Warning that Ireland was likely to "end up with a regime in which almost no abortions are refused," he questioned how many babies with disabilities will be born in Ireland in 20 years' time.

"Whatever else happens, the pro-life movement must keep going," he said.

A version of this story appeared in the June 15-28, 2018 print issue under the headline: Catholic drift seen in Irish abortion vote.