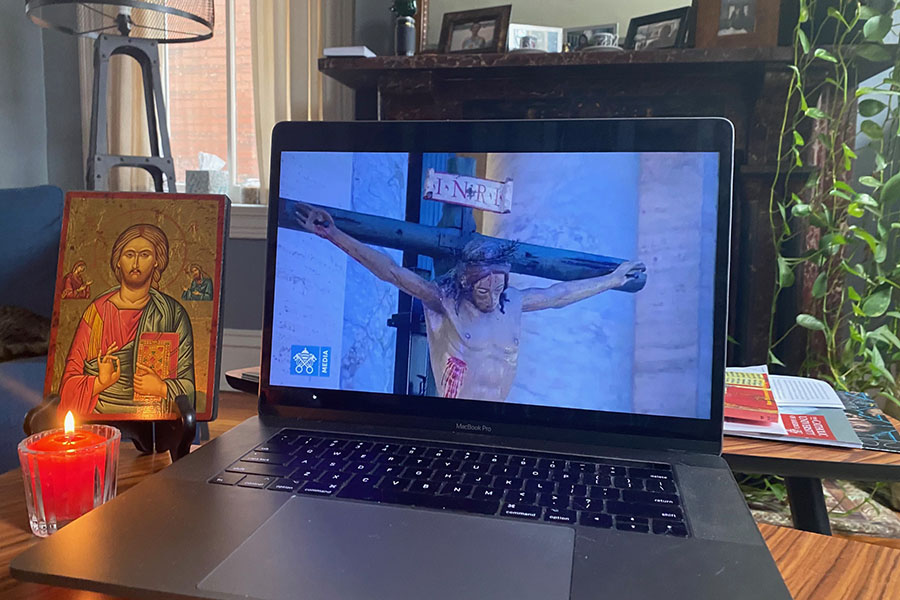 A "computer sacred space" for when Javier Orozco, president of the National Catholic Association of Diocesan Directors for Hispanic Ministry, prays with a virtual community. (Provided photo)

Elisabeth Román ordered a pizza on Easter Sunday and turned on her TV to watch Cardinal Blase Cupich celebrate Mass. It was a sad and lonely day for her, she said, heightened by the fact that it's usually joyous.

A normal Easter would've meant meeting her sons, daughters-in-law, and grandchildren at church, later going back to her house for the big brunch that she loves to cook — the feast and family gathering being like an extended celebration of the religious service. Instead, "there was a sense of loss."

Román's experience in isolation is a typical tale for everyone in the United States who's staying home to curb the spread of the coronavirus. Such distancing measures have severed the ability to pray in community, a practice that animates many Latinos in the U.S. who, like Román, see relationships as an integral part of their Catholic, spiritual expression.

But observing rituals and prayer under one's own roof is also a historic callback for this demographic, as early Catholic Latinos lived out their faith in the privacy of their homes.

Now, some consider the temporary loss of communal worship to be an opportunity to rediscover "the roots of our spirituality," said Román, president of National Catholic Council for Hispanic Ministry. "Some of us come from towns that didn't even have a pastor, so you're at home and the grandmother gets everyone together to pray the rosary and talk about the Gospel."

Once again, "we're in our domestic church." 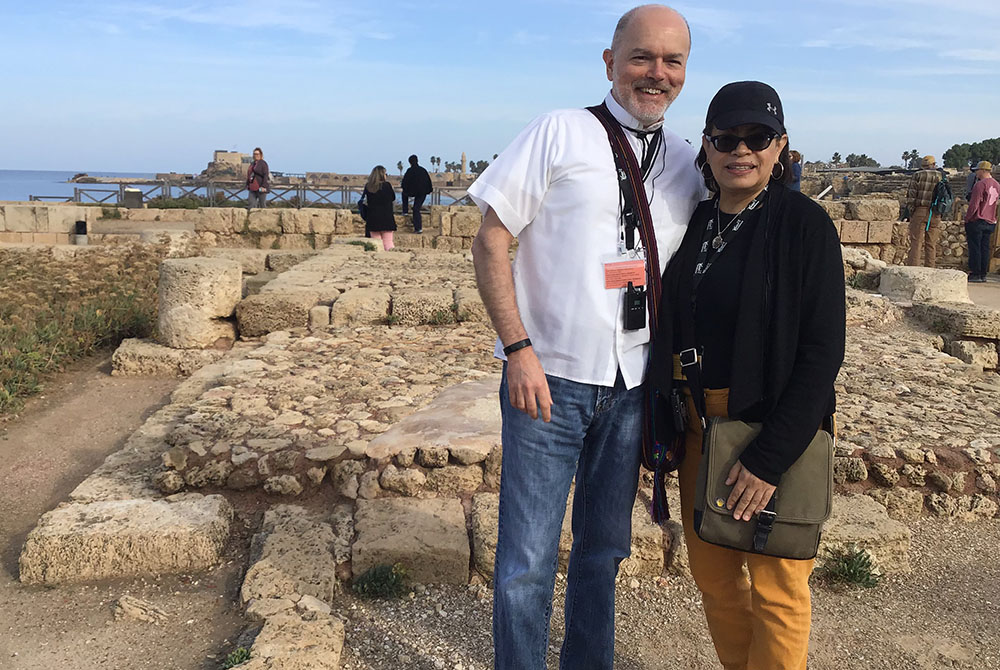 With Catholics now celebrating Mass virtually at home, Deacon Pedro Laboy said it's become an opportunity to include more of the family.

"Before, they'd go to church and have their own prayer groups or rosary or Legion of Mary gathering," said Laboy, a member of the National Association for Hispanic Deacons of the US who ministers in Casselberry, Florida.

"Now they've expanded so that every member of the family can participate; it's open to everybody," he said, adding that he's seen this spark a renewed curiosity for those who have stopped going to church.

To keep young Latino Catholics from becoming disenchanted with the faith, Adriana Visoso said it's important that they be exposed to a variety of spiritual practices so that they can figure out what they like.

Otherwise, "if they don't like it, they quit. … It's not that the faith isn't strong; it's the methodology," said Visoso, president of La Red Catholic Network, which is dedicated to Hispanic youth ministry. (Though Latinos younger than 18 constitute a majority of young U.S. Catholics, they still follow the national trend of becoming less religious with every new generation.)

For Román, the challenge is keeping her parish community engaged and connected so that they can "continue to be church while our temples are closed."

"People will forget the church in as much as the church forgets the people," she said, paraphrasing a papal secretary's recent warning.

When the U.S. assumed the southwest region that was formerly Mexico, one of the first things that the Anglo bishops did was close the seminaries, said Gilberto Cavazos-González, a Franciscan friar and scholar of the theological study of Christian spirituality. They were unsure if these indigenous people were fully human or possessed a soul — let alone viable candidates for ordination.

As a result, the new Mexican-Americans took to the back pews of the church, "if we went to church at all," Cavazos-González said, who is Mexican-American. He added that those still interested in Catholicism "started to realize that for the sacraments, we need priests, but for everything else, we don't.

"So, we started living our faith at home. And now with the coronavirus, we're having to do that again." 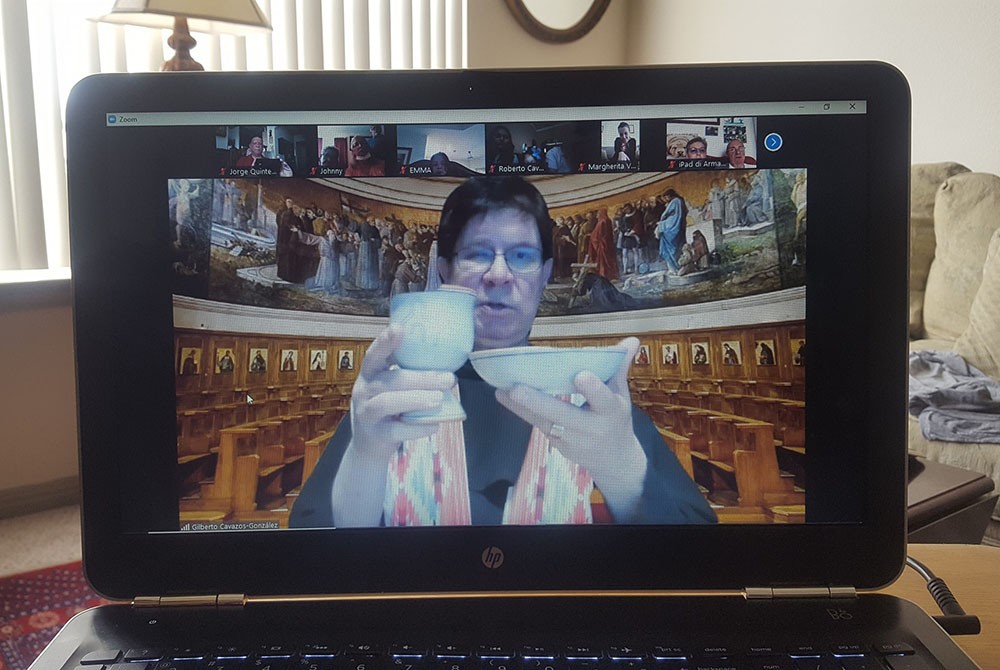 Until the 2010s, the term "spirituality" wasn't widely used or explored among Latino Catholic academics, said Cavazos-González, a former president of the Academy of Catholic Hispanic Theologians of the US, whose presidential address called attention to the deficit in Latino spirituality studies. At the time, most theologians would instead explore the concept through the lens of "popular religiosity" — religion that belongs to the people.

For Latino Catholics, expressing their faith can often feel most natural through an "emotional spirituality," as those who spoke with NCR described it: a personal relationship with Jesus that elicits an emotional response. (Cavazos-González noted that a personal relationship with Jesus is a hallmark of Protestant and Evangelical churches, likely a contributing factor for their success in drawing Hispanics to their churches.) 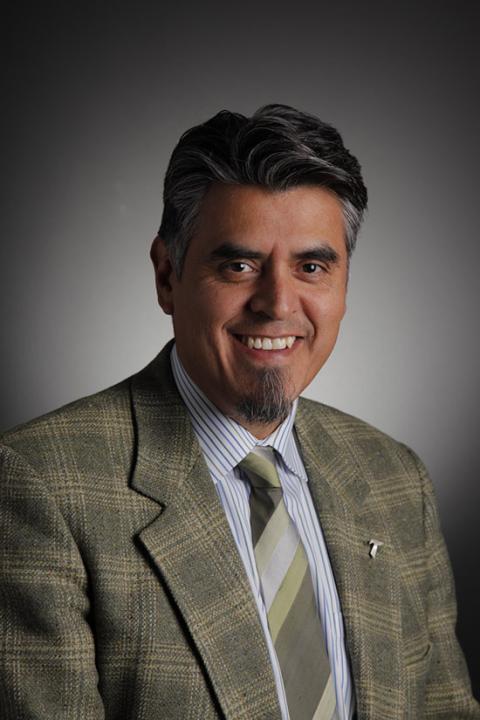 Javier Orozco described that connection to Jesus as a "deeply incarnational" spirituality.

"In the Hispanic community, this mística always takes us to the community, because our Hispanic spirituality is not individualistic; it's deeply communal," said Orozco, president of the National Catholic Association of Diocesan Directors for Hispanic Ministry, or NCADDHM.

"It's a spirituality that is always very attentive to the other, to the issues of solidarity."

Connection with each other, God and Mary

When first-generation Latinos arrive in the U.S., they come to a country with a foreign culture, language and food.

"The only thing that we could connect to is the Catholic Church, so that's what we turn to when we get here," said Román, director of Hispanic ministry for the Joliet, Illinois, Diocese, and a board member for NCR. She added that this is likely why Latinos in the U.S. are drawn to their home altars and rosaries.

Church becomes not just a place to make new friends; it becomes the place where they no longer feel like outsiders, attending Spanish Mass, if it's offered, and jumping back into the same rituals and rhythms they knew in their home countries. Church is home.

The welcoming, communal spirit among Latinos is not something they often talk about because it's so engrained in the culture, said Visoso, associate director of training programs for Instituto Fe y Vida.

"We always search to belong to something, and when you find a community, even in your group or diocese or parish, the service part is almost natural," she said.

Orozco added that for Latinos, "nearness to one another is important," making this moment of social distancing amidst a pandemic to be an extra challenge for a culture that values the tangible elements of their spirituality, "the visual, the smells, the touch, the relationships" that compose an incarnational spirituality.

When Cavazos-González was asked to celebrate a virtual Easter Mass for his extended family, he noticed that many family members began connecting 30 minutes before the scheduled time, catching up from their homes in Chicago or Monterrey, Mexico, and continued talking almost an hour after Mass.

One particular figure in Christianity helps bridge this gap from the divine and the human, and has a pervasive presence in Latino households and devotions: Mary. 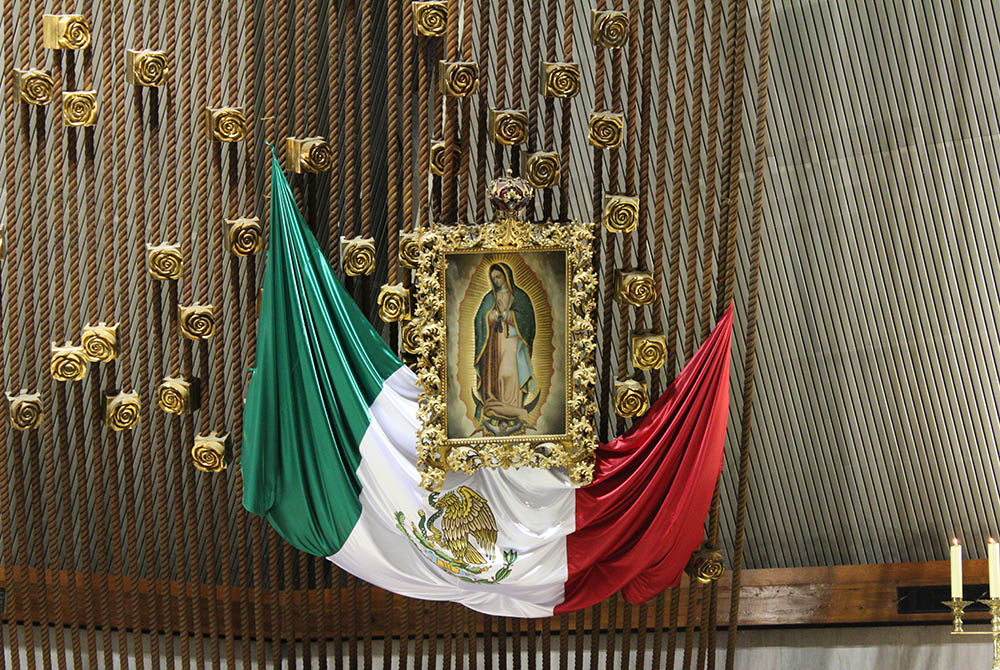 "You can’t walk into a Latino home and not find the Guadalupe," Elisabeth Román said. "It’s almost like Mary is family in our house." (Unsplash/Edgar Henríquez, LC)

"To Jesus through Mary," as Marians say — though some people can get "stuck on Mary," said Cavazos-González, who is also secretary of the Pontifical Academy of Mary International.

He said one reason for this strong attraction to Mary could be the fact that, unlike Jesus, she's relatable in her complete humanity; because Jesus was both human and divine, there's a piece of him that will never feel knowable.

"But Mary's full humanity, I can get in touch with that."

Without a clear date for when churches will be able to fill its pews like any normal Sunday, Román said she's already thinking about how the interpersonal nuances will have to readjust. Squeezing past one another to find a seat, hugging and shaking hands, crowding the popular Spanish Masses — what does that look like after months of hiding from a contagion?

"As a church, we're about people, so what do we do when people can't convene or be close or gather?" she said. "We are going to have to adapt to a new form of worship and church, and the hope is that we can go back to being who we were." 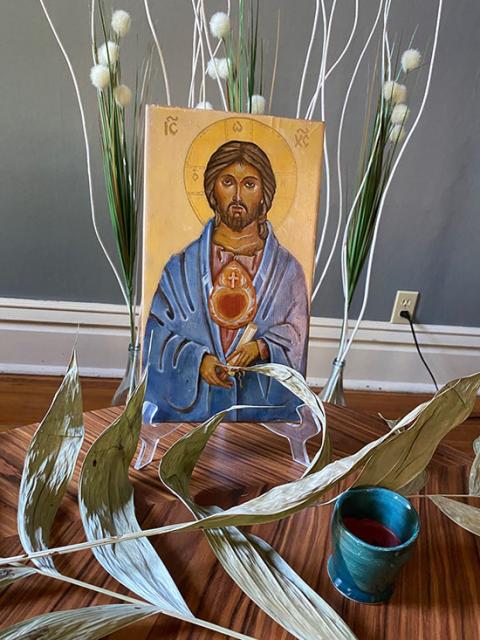 The sacred space, or altar, in the home of Javier Orozco (Provided photo)

Looking at the wider Catholic Church, Orozco said he feels a heightened sense of community born of this crisis.

"This painful, powerful moment has also opened up for us bridges of hope, puentes de esperanza, that take us to one another," said Orozco, who is also executive director of human dignity and intercultural affairs for the St. Louis Archdiocese.

"It doesn't matter if you're Latino Catholic or Polish Catholic, we have experience of the spiritual language, the paschal mystery, and now we have been transformed for that collective experience of sorrow. … We can then be more open to the other in ways that we weren't before."

With the pandemic also resulting in an unprecedented global recession, Cavazos-González points to the potential economic burdens that parishes and clergy will have to shoulder. But even there he sees a silver lining, with this situation being a direct challenge to clericalism: People are at home and "being Catholic without a priest."

"Are there ways we can balance the need for a priest?" he said, adding that virtual, intimate Masses allow for a more open celebration, as he invites others to participate in the sermon and share their thoughts on the readings.

Still, he said, a longing for the Eucharist will likely galvanize Catholics to go back to church.

Orozco mentioned an acute awareness that the body of Christ is suffering together, but with different parts experiencing the crisis more intensely than others. This moment is calling on everyone to "seek out the most vulnerable parts of the body," he said, such as the homeless or jobless.

Laboy has noticed a new attachment to fundamental questions — who we are, why we're here — with this time apart serving as "a pause to concentrate more on my spirituality."

Ultimately, this crisis is a call for change, he said.

"Biblically speaking, every time we talk about 40 days of quarantine, it always involves a difficult time, but it also involves change and grace."

A version of this story appeared in the May 15-28, 2020 print issue under the headline: Latino Catholics rediscover spiritual roots.