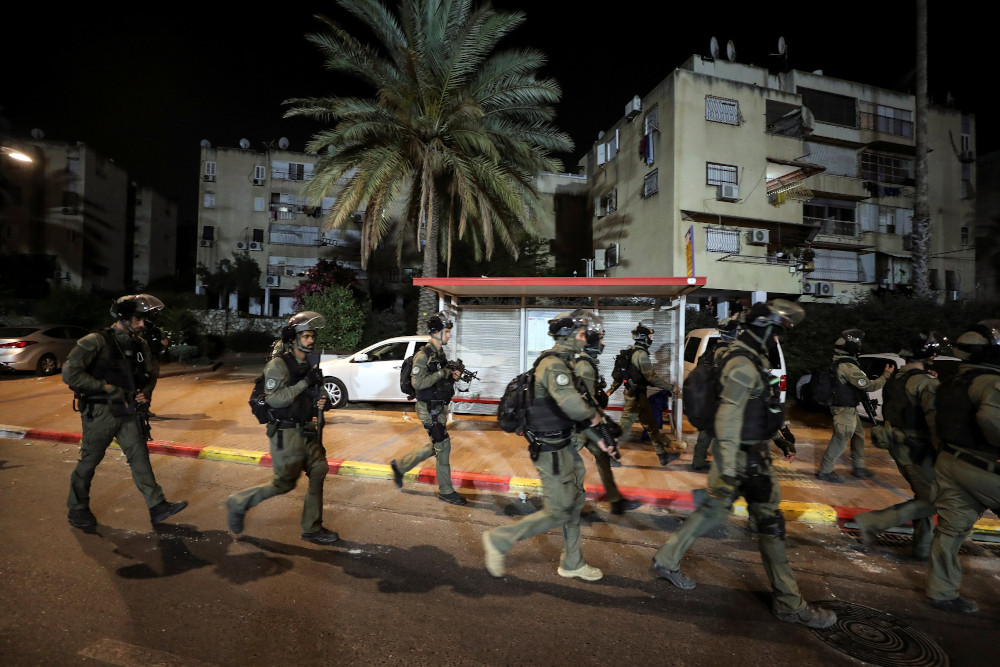 As Israel escalated its assault on Gaza May 14, the nation also faced growing civil unrest in its mixed Jewish-Arab cities, considered a symbol coexistence.

May 12 saw the heaviest violence, and in Israel's largest mixed city, Haifa, a Jewish gang rioted through the German Colony neighborhood, known for its good relations between its mainly Jewish and Christian residents. Gang members damaged Arab property and set cars on fire, following a similar rampage by an Arab gang two days earlier.

People are and should be afraid, said Maronite Fr. Yussef Yakoub. "Peaceful citizens are paying the price and no one is concerned."

Yakoub said most of the people involved in the Haifa rioting had been brought in from outside by extremist groups on both sides. He said along with other Arab community leaders, he had met with Haifa Mayor Einat Kalisch-Rotem and condemned the Arab violence and was now expecting that the Jewish mobs be brought under control as well.

"The majority of people in Haifa, Jews and Arabs, are not happy with what is happening in Haifa, they are against this violence. It is a pity that usually the violent minority are the ones dominating the situation," he said. "At the end of the day, they are fighting each other, and we pay the price. They are attacking Christian houses in the same Christian neighborhood where we are peaceful people."

The police have been unable to contain the rioting but said they arrested some 400 people; they did not specify how many Arabs and Jews were in that group.

Yakoub said it appeared that the police were protecting the Jewish rioters in Haifa by marching behind them on horses. According to reports, some 160 people have been injured in the riots.

About 30 Jewish men attacked the three daughters of Wadie Abunassar, honorary Spanish consul and spokesman for the Assembly of Catholic Bishops in the Holy Land. The men beat the young adults with flag poles flying the Israeli flag and threw stones at their cars.

"I am really frightened," Abunassar told Catholic News Service. "The common existence between Jews and Arabs has been fragile for many years. The silent majority is abducted by the vocal minority and, unfortunately, the political leadership is allowing that to happen."

He said physically, his daughters were lightly injured, but they remain emotionally traumatized by the attack. His family received many messages of support from Jews and Muslims, political leaders and diplomats.

In a Jerusalem Press Club interview shared with journalists, Thabet Abu Rass, executive director of the Abraham Initiatives, said the current violence was caused by deep grievances such as "marginalization, alienation and discrimination against Arab citizens in the mixed cities."

In Tel Aviv, Katrin Straub-Tal, a member of St. James Vicariate for Hebrew-speaking Catholics, said she was almost more concerned about the internal violence than she was about the missiles still flying overhead as she tried to maintain a semblance of normalcy for her two children.

While it is already her third time experiencing missile attacks, she said the intensity of these attacks — which reached almost 130 missiles a night — was much higher than before, and her children were staying home from kindergarten. They were spending nights at her in-laws' home, where there was a safe room against the missiles.

"It is very depressing to see how quickly (this exploded); there is this frustration, an unrest of gangs around the street, Jewish groups destroying Arab shops and lynching, and Arab gangs burning synagogues," Straub-Tal said. "To see it all fall apart is so sad when for many years people lived together."

"So far I am mostly managing my children. I am trying to function and don't have time off to check about myself and where I am. I will do that in the coming days," she said.

For now, to maintain her spirits, she has watched a joint evening of prayer with priests from the vicariate together with rabbis and imams, recorded in Jerusalem earlier in May.

"It was giving me the biggest hope and reminding me about the importance of coming together and not getting divided, really focusing on what we share religiously and not so much the political nationalist divisions," said Straub-Tal. "I just wanted to cry when I saw it; it is the biggest gift that they did it now at a time when it is so needed."

Amid the violent images are stories of hope: An Arab Muslim in Jaffa prevented an Arab mob from burning down a synagogue and rescued the Torah scrolls from the flames; groups of Arabs and Jews gave out flowers together near Nazareth; and other groups of Jews and Arabs protested violence and racism together throughout the country. Religious and municipal leaders have spoken against the mobs.

In the meantime, Yakoub said he had advised members of his Haifa parish to remain indoors to wait out the situation until they can begin mending relations between the two communities.

"It is very easy to break things, but to build them back up takes time," he said.