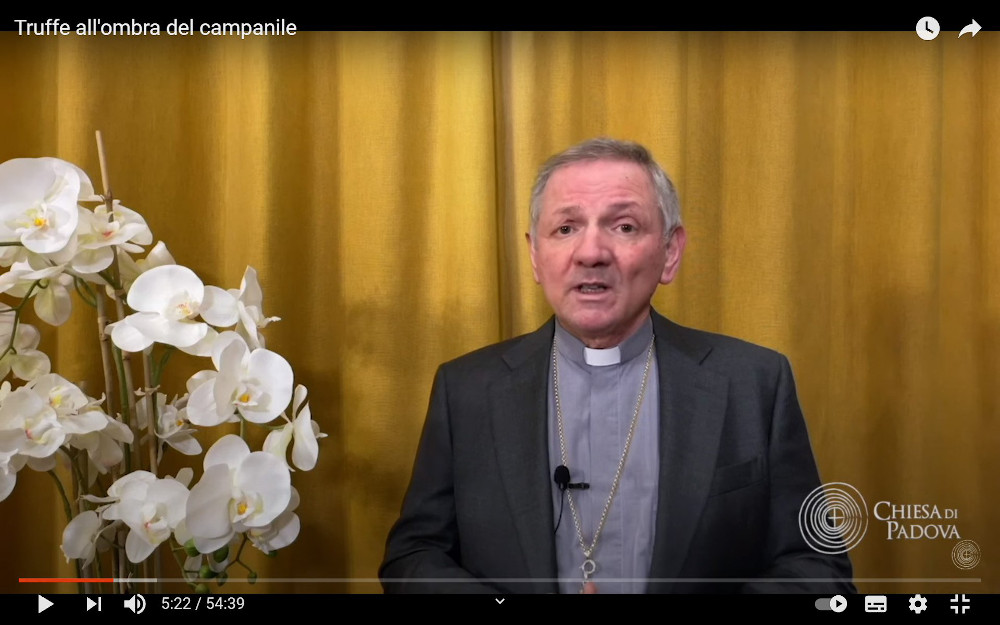 Bishop Claudio Cipolla of Padua, Italy, is pictured giving a presentation for the "Scams Under the Belltower" course in this screen capture from a video posted on YouTube. After an elderly priest was scammed out of more than $450,000 by a group of people claiming poverty, the Diocese of Padua launched a continuing formation program for priests focused on financial accountability and avoiding scams. (CNS photo)

After an octogenarian priest was swindled out of more than $450,000 over a two-year period and threatened when he stopped giving the "family" money, the Diocese of Padua, Italy, launched a continuing formation program for priests focused on financial accountability and avoiding scams.

Italy's finance police announced May 18 that they had arrested 11 people in connection with the long-term scam of the elderly priest, who ran a charitable foundation.

"The malefactors adopted a well-rehearsed script consisting of lies, such as, for example, family misfortunes, accidents and judicial vicissitudes, aimed at moving to compassion their interlocutor, who was animated exclusively by the charitable spirit of helping others, making him believe that the only viable solution was represented by the bestowal of sums of money," the police statement said.

Examining the priest's phone records, they said members of the group called him more than 14,000 times between July 2018 and July 2020, usually requesting cash or prepaid debit or gift cards.

Information from tapping the priest's phone, the police said, made clear that the group "systematically manifested to the priest completely nonexistent needs" and repeatedly promised to repay any amount received from him.

When the priest stepped down from the foundation and no longer had access to money, the swindlers began making threats, the finance police said. That is when he turned to the police.

The elderly priest was not the only one who has been tricked.

In a diocesan course titled "Scams under the Belltower," which was livestreamed in April, Bishop Claudio Cipolla of Padua said, "This has happened to many priests or at least to such a number that it is a real concern," which is why the diocese turned to the finance police for help in designing courses for priests and for members of parish finance councils.

Msgr. Giuliano Zatti, diocesan vicar general, said the finance police estimated that in the past five years, diocesan priests and parishes had lost at least 1.8 million euros ($2.1 million) to scammers, but that figure does not include other fraud attempts investigated by other law enforcement agencies.

Cipolla said priests, often elderly, fall victim to the same kind of scams other people, "who are too good," fall for, including: being asked for a small loan to "unblock" a bank account with much more money; requests for prepaid cards supposedly to buy food or clothing; accepting offers to "restore, repair or clean" chalices or other valuable liturgical items that are never returned; and requests for loans that are never repaid.

The scams, the bishop said, "put at risk our ability to care for the real poor."

The courses, the bishop said, are not just about avoiding scams. They are part of a broader effort to ensure the money and other resources of parishes and Catholic organizations are accounted for with transparency.

Part of that, he said, is ensuring that every parish has a finance council because "the money given to a parish or Catholic activity does not belong to the priest, but to the community."