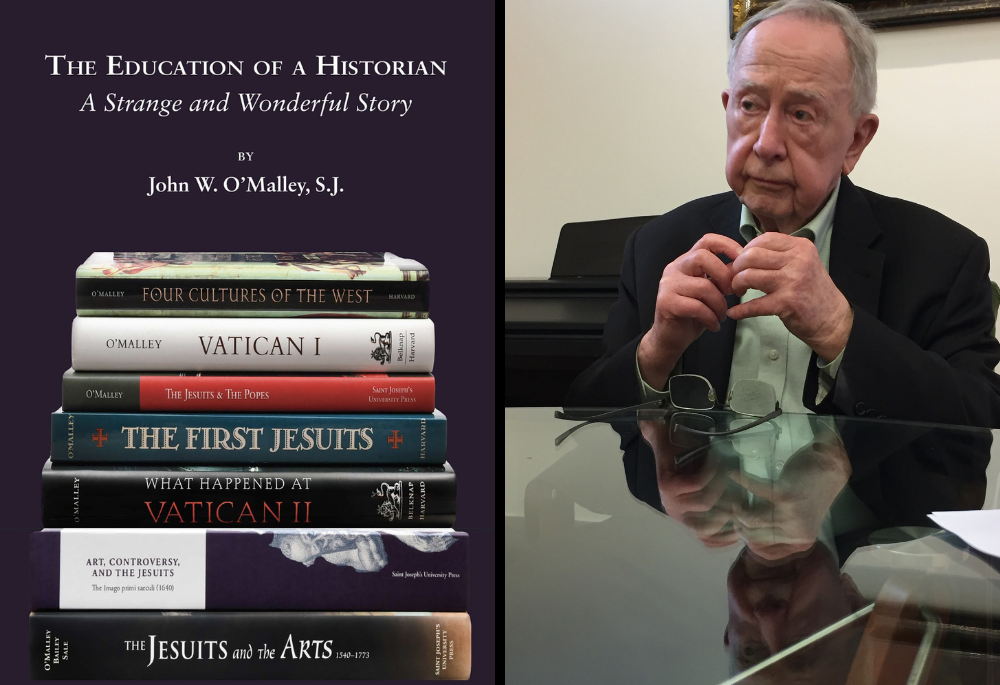 Cutline: The cover of 'The Education of a Historian: A Strange and Wonderful Story' by Jesuit Fr. John W. O'Malley; at right, O'Malley listens to a reporter's question in 2018. O'Malley died Sept. 11. (CNS photos/Courtesy of St. Joseph's University Press; Cindy Wooden)

Jesuit Fr. John O'Malley, whose perspectives and expertise on church history and the Second Vatican Council attracted audiences that included undergraduate students and well-educated theologians, died at the Jesuit community in Baltimore Sept. 11. He was 95.

A prolific author whose books won numerous awards and have been translated into multiple languages, O'Malley's teaching style helped make history interesting and understandable and appealed to a wide array of clergy, theologians and undergraduate and graduate students as well as scholars of different faiths and even those who professed no faith.

A funeral Mass is planned for Sept. 17 at Holy Trinity Parish in Washington. Burial will follow in Georgetown Cemetery.

O'Malley's deep knowledge led to uncounted invitations to speak on his expertise and insight into church history at various symposia, lectures and academic events. He continued to participate in programs into his 90s.

O'Malley's influence was felt by students throughout his long academic career.

Recalling the impact of O'Malley on his life, Jesuit Fr. James Martin, writing online for America magazine soon after his death, described the historian as someone who enthusiastically shared his friendship and was eager to share his knowledge.

"He was loved by his brother Jesuits, his students and friends as a person: a holy and generous Jesuit priest. Unfailingly kind, helpful, generous, mild, curious, modest (even for his humorous occasions of faux-pride) and always interested in you," wrote Martin, editor at large of America magazine.

O'Malley was born June 11, 1927 in Tiltonsville, Ohio, a village on the Ohio River near Wheeling, West Virginia. He entered the Society of Jesus at 18, feeling called to the priesthood. However, his interest in the Jesuits grew not from a desire to become a parish priest, but from the order's work as educators and missionaries.

He was accepted into the order's Chicago province, entering the novitiate in 1946 after studying Latin for a semester at John Carroll University in Cleveland. His education continued at West Baden College in Indiana where he studied philosophy for three years.

His first teaching assignment was at St. Ignatius High School in Chicago, where he taught history. In 1956, he returned to West Baden to study theology and was ordained a priest June 14, 1959.

The history of the Jesuits was O'Malley's calling throughout his formation and education. He began studying the German Counter Reformation and the role played in it by the Jesuits. He began his tertianship -- a Jesuit training period after ordination -- in Austria, learning German and focusing on German history.

During a sightseeing trip to Italy his focus changed. After the visit, where he explored Italian culture and food, he began doctoral studies in Italian history at Harvard University. He then returned to Italy for a two-year fellowship at the American Academy in Rome to work on his dissertation.

While working on his doctorate, O'Malley pronounced his final vows as a Jesuit in 1963 in Boston.

As an author, O'Malley explored the history of the Jesuits as well as the role of the Catholic Church throughout history. Two of his best-known works are "The First Jesuits," published in 1993, and "What Happened at Vatican II," his 2008 book  which has been translated into 12 languages.

In 2013, he was named the winner of the John Gilmary Shea Prize for best book for his work: "Trent: What Happened at the Council," which has been published in five languages.

The accomplished Jesuit held fellowships from the Guggenheim Foundation, the National Endowment for the Humanities, the American Council of Learned Societies and other academic organizations.

He also received lifetime achievement awards from the Society for Italian Historical Study, the Renaissance Society of America and the American Catholic Historical Association. In 2016, Harvard University's Graduate School of Arts and Sciences awarded Father O'Malley its prestigious Centennial Medal.

After leaving Georgetown, O'Malley moved to the St. Claude de la Colombière Jesuit community in Baltimore, where he died.