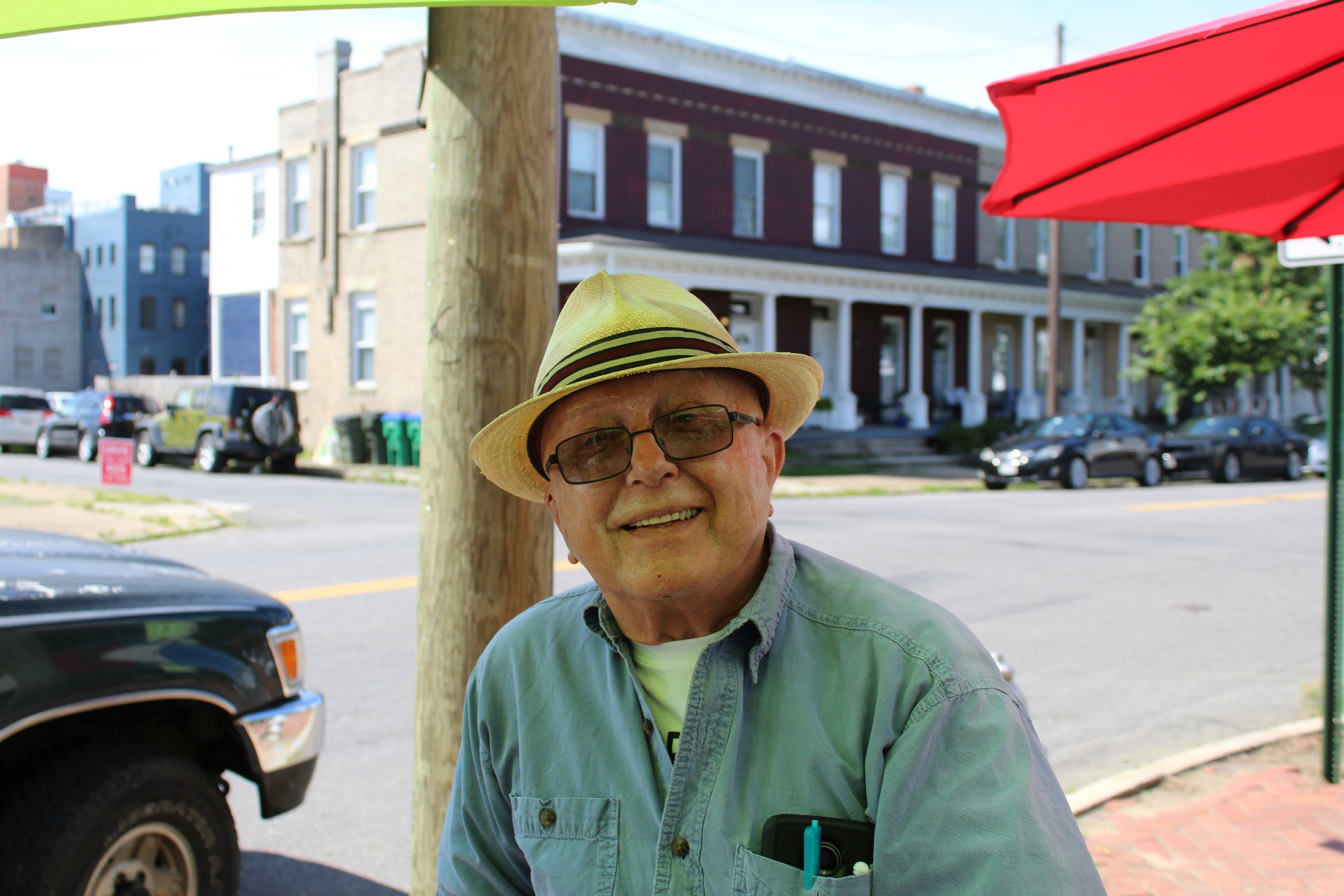 Jesuit Fr. Jack Podsiadlo, 79, spent decades at the Nativity Mission Center, a pioneering middle school for Latino boys on the Lower East Side of New York, before leading a Latino leadership program in Richmond, Virginia, for six years. He recently moved back to New York to begin his retirement in the Bronx. (Robert McCabe)

When Jesuit Fr. Jack Podsiadlo, a New Yorker, approached his new assignment in the capital of the Confederacy, he felt very much a Yankee.

"I came down (Interstate) 95 -- and then panicked because I was going to have to cross the Robert E. Lee Bridge," he told members of the Richmond-based Sacred Heart Church community, who gathered in a warehouse recently to wish him well as his six-year stint as head of the Latino Leadership Institute there wound to a close.

"And I said, 'What must my father be thinking?" he recalled wondering.

"And then I got off the bridge and I found myself on the Jefferson Davis Highway. And I said, 'Is this going to work?' "

As the laughs died down, he quickly added: "But it did work."

And in a big way, apparently.

"I can't see us replacing him," said Patricia Alexander, a Sacred Heart parishioner and lector, one of about 150 who showed up to say goodbye at his send-off. "He has been such a magnificent force in the church."

And a few days after that, he was en route back home to New York, where he was to begin his retirement in the Bronx.

Before heading out of town, though, he shared with this reporter — who, full disclosure, first met him 45 years ago while a student at Fordham University — some thoughts on his 61 years as a Jesuit and 47 years as a priest, many of them spent on the streets of New York City, a social-justice warrior steeped in the ethos of the 1960s.

"It was all serendipity," he said. "I could never have planned it. I thought I would be teaching art and photography in a Jesuit high school for the rest of my life."

What he wound up committing much of his career to was groundbreaking: a Jesuit middle school created to serve poor Latino boys from a neighborhood populated by drug addicts and prostitutes.

It was an island in the middle of a vast sea, something unique, he recalled in a recent reflection piece: "There was nothing like it in the Jesuit educational system nor in the Catholic school system."

Two key formation experiences — his undergraduate-philosophy studies at Spring Hill College in Mobile, Alabama, in the early 1960s, where he witnessed first-hand the emerging civil rights movement, and a few years later, his theological studies at Woodstock College in New York City, where he first gained exposure to Latino culture and began to learn Spanish — prepared him in ways he could not understand at the time for his future ministry.

The Society of Jesus' 32nd General Congregation in the mid-1970s came to ground his understanding of his work, which identified the mission of the Jesuits as "the service of faith, of which the promotion of justice is an absolute requirement."
Announced just a year after his ordination in 1972, that gathering in Rome and the vision it generated were what guided Podsiadlo in the years to come, he wrote.

Others who knew him in Richmond seemed to vouch for that.

Tanya Gonzalez is the executive director of the Sacred Heart Center, a former parish grade school housing a smorgasbord of social services that touch an estimated 10,000 people a year.

It includes the Latino Leadership Institute that Podsiadlo founded and led in Richmond, a program that, among other things, helps people realize, hone and share their talents in the context of the strengths of the Latino culture, Gonzalez said.

"He's always just fully present with people and fully immersed in what they're sharing with him and what he's giving to them," she added.

That experience "from up north" included decades at the Jesuits' Nativity Mission Center on the Lower East Side of New York.

In 1971, it morphed into a middle school for Latino boys that became a national model for turning around the lives of kids from socially disadvantaged families, guiding them to Jesuit high schools and top colleges.

"To me, and scores of others, he is a man worthy of sainthood," said L. Mickey Fenzel, a professor at Loyola University in Maryland, in an email.

Fenzel's 2009 book — "Improving Urban Middle Schools: Lessons from the Nativity Schools" — documents how the Nativity approach appeared to crack the code for getting urban children, who as a group had a poor academic track record, on paths toward success.

"Although Jack was not involved in the opening of the school, he served this school for a number of years in a variety of roles before coming to Baltimore to found the Nativity Educational Centers Network," Fenzel said. "Over the years, also, he was instrumental in informing others of what became the Nativity model and helping them open other schools using the model."

In his book, Fenzel wrote that he had come to think of Podsiadlo as "Father Nativity." 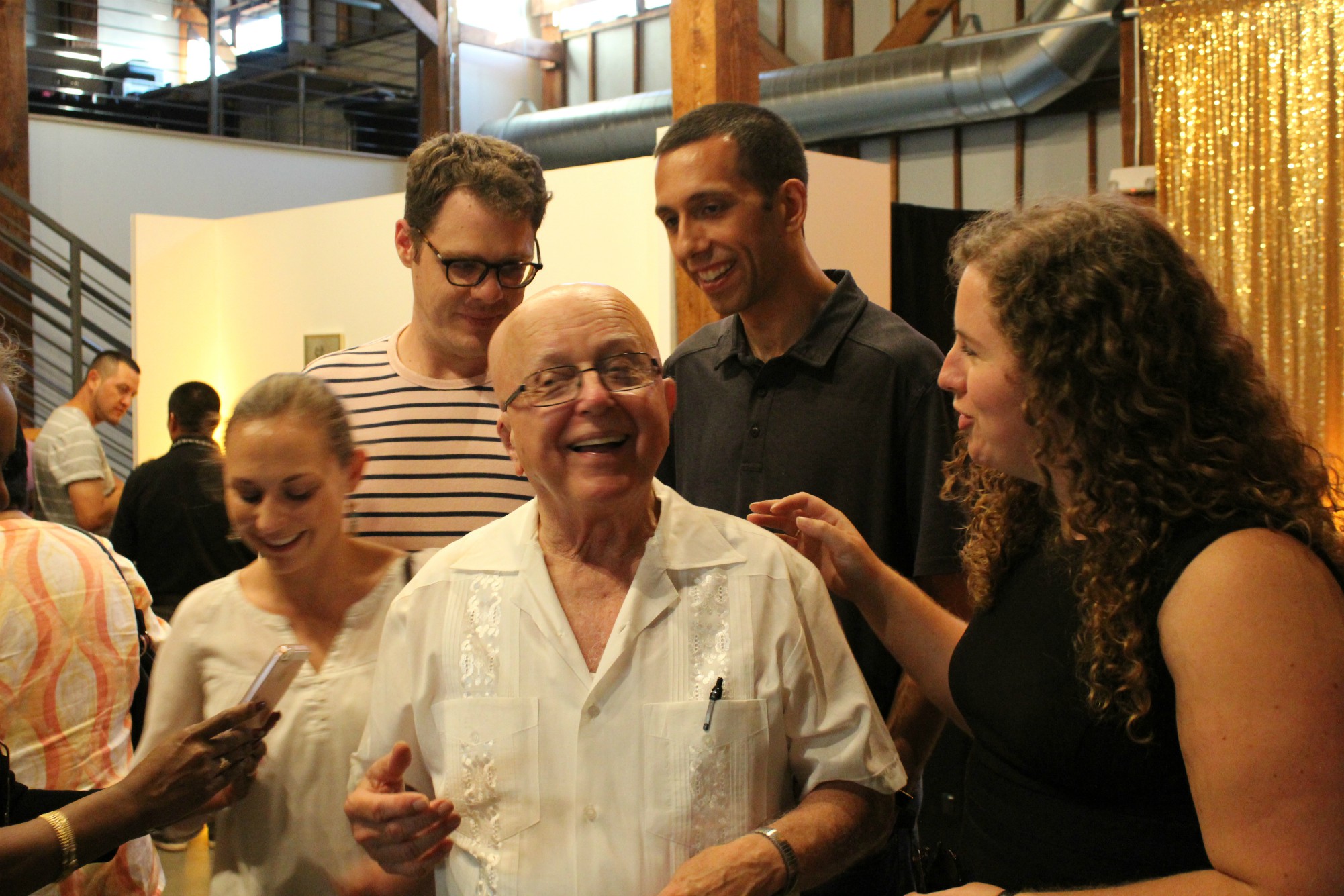 "It's going to be a mammoth hole to fill," a Sacred Heart parishioner said of Podsiadlo. "He's the only one that has ever asked me some specific questions to make me think about why this, why that," another said.

Daniel Perez, 35, a 1998 graduate of the founding Nativity Mission Center school in New York, said he thinks the title fits.

While a lot of people are part of the Nativity narrative, Podsiadlo "could and should be credited for the expansion of the model," Perez noted, adding that he "definitely helped package it and share it with the wider world."

One of four kids whose parents were Mexican immigrants, employed at hotels in Manhattan, Perez went on to graduate from the Jesuits' Xavier High School in New York in 2002 and from The College of the Holy Cross in 2006.

After considering pursuing a job at Time Warner, where he interned for two summers, he decided to go back to Nativity after getting his degree to direct the school's "graduate support program," a mentoring program created to help Nativity alums as they negotiated the travails of high school, college and eventual careers.

With Podsiadlo's guidance and support, he eventually went on to earn a master's degree in education at Fordham.

Today, he's the executive director of the New York-based NativityMiguel Coalition, made up of 49 member schools nationwide, along with two in Canada, all modeled on the school he attended in the '90s.

"It's very much the Nativity story … tapping a student or a person on the shoulder and saying, 'You can and should do this — or at least consider it. Don't worry about failing or don't worry about not being good at it. I see the potential in you and so should you,' " Perez said. "And that's really been Father Jack's relationship with me and, I would say, with countless others."

The graduate-support program was among the innovations Podsiadlo brought to the school, Fenzel said, helping its graduates succeed through "tutoring assistance, involving the parents, monitoring their academic progress, and providing a safe place for the graduates to gather."

William Philliber, formerly a professor at SUNY New Paltz, co-authored a research article with Podsiadlo in 2003 that documented Nativity's success, despite Latino boys' having one of the highest school dropout rates of any group in the nation: 81 percent of its graduates completed high school, 75 percent entered college and 37 percent graduated with a bachelor's degree.

Those rates were much higher than those for Latino youth nationwide, according to the article.

After six years of teaching at Nativity in the '70s, Podsiadlo returned in 1984 to lead it in a number of roles into the 2000s, though big changes had begun to unfold. 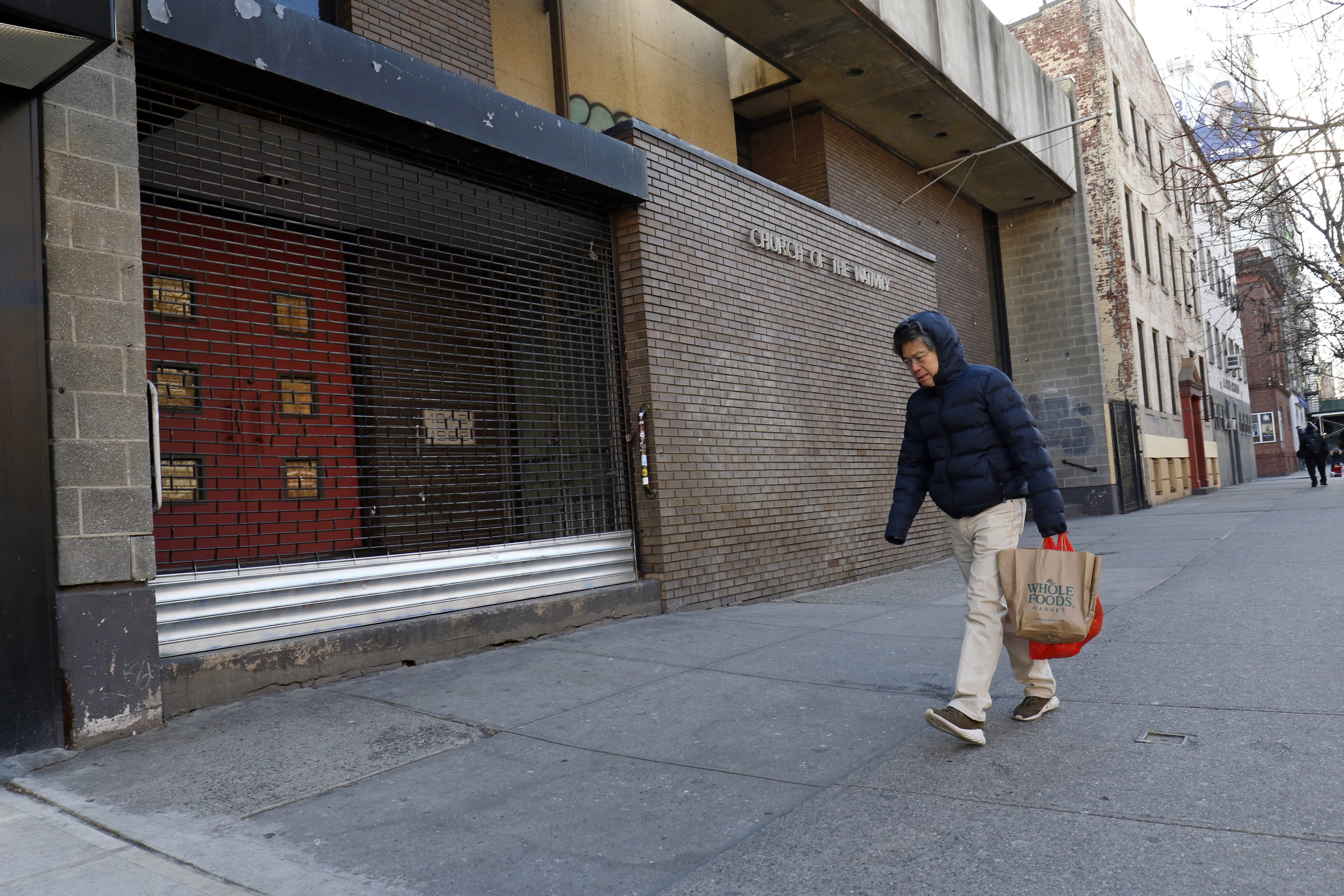 Church of the Nativity on Manhattan's Lower East Side, which was located three blocks away from the Nativity Mission Center and also staffed by the Jesuits, was also a victim of the neighborhood's rapid gentrification. The church was decommissioned on Dec. 4, 2018. (CNS photo/Gregory A. Shemitz)

A 2010 New York Times' feature on Podsiadlo and Nativity depicted how gentrification of the Lower East Side shifted the demographics so dramatically that the school was having a hard time finding the poor Latino students that had been its focus.

"It used to be you could see drug deals in the park and hookers with johns," he told the Times. "Now it's high-rises, hotels and more construction cranes."

Back in the day, Podsiadlo told the paper, he wore "gloves in the fall to clear the playground across the street for recess — piles of autumn leaves sometimes hid the needles that had been dropped by addicts."

Prostitutes who worked in the park, he added, "would proposition visitors in the school’s doorway."

By 2010, more than a third of the school’s 55 students commuted to Manhattan from other boroughs, according to The Times' report: " 'In my mind, the neighborhood was still in the 1960s,' said Glenn Pellino, Father Podsiadlo’s assistant, who had grown up in Brooklyn but spent much of his career elsewhere before coming to Nativity in 2008. 'And when I got off the subway, the first thing I saw was a Whole Foods.' "

Though they searched all over New York for a suitable place to relocate Nativity, it never worked out.

The following year, at the age of 73, Podsiadlo moved to Virginia, where he adapted what he learned from his years at Nativity to create the Latino Leadership Institute at Sacred Heart.

While his Nativity experience helped shape Podsiadlo's ministry in Virginia, it was an altogether new venture.

"It's a different clientele," he said.

Yet those who praised him at his Richmond going-away party spoke with words very much like those of his Nativity proteges, some in Spanish.

"You all taught me so much," he said in his parting remarks, thanking all the people who had told him in the previous weeks, whether in Spanish or English: "We love you very much."

"Usually, the priest just gets the formal words," he added.

Asked to reflect on his own success story and what it has been like to see brother priests, including some Jesuits he's known, caught up in sex-abuse allegations, he seemed moved as he responded.

"I mean, some of the people in the Society have been friends that I have known since I was 13 years old," he said, before taking a long pause. "I'm aware of this," he added.

A bit simplistic, maybe, but "that's it," he said.

Pellino, who worked with Podsiadlo as Nativity was being phased out, said he isn't sure the sex abuse scandals are as much the issue as the empty ranks behind Podsiadlo and others in similar work as they move on.

He recalled a comment another Jesuit made to Podsiadlo: "Jack, no one is coming up now who is going to take on the work that we have."

"That is the bigger problem," Pellino added.

Podsiadlo, though, said people like Perez "who have been bitten by the bug" give him hope: "These guys are committed to giving back."