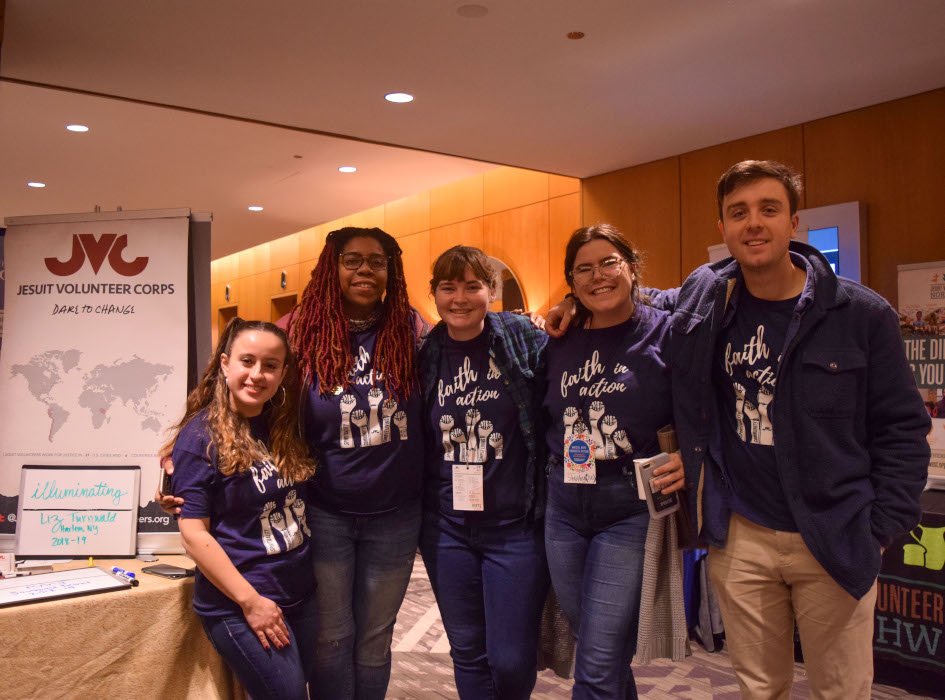 Members of the Jesuit Volunteer Corps pose for a photo Nov. 17, 2019, during the Ignatian Family Teach-In for Justice in the Washington suburb of Arlington, Va. Volunteers are recent college graduates who are sent to cities throughout the U.S. to do a year of service. Some work with refugees and immigrants during the resettlement process. (CNS/Sydney Clark)

Each year, the students flock to a hotel just outside of Washington. Like migrating birds signaling winter, you can tell the time of year by the arrival of the high schoolers, college students and young alumni from Jesuit universities around the country.

They're the type who scream with joy listening to an 80-year-old nun and snap their fingers as they approve of something they've heard in the crowded ballroom of the Gateway Marriott in Arlington, where the event known as the Ignatian Family Teach-in for Justice has taken place the past few years.

This Nov. 16-18, the event tied record attendance as more than 2,000 participated in two days of lectures about social justice — from immigration to poverty to climate change —  and a visit to Congress on the third day of the event, as the Ignatian Solidarity Network, which organizes it, sought to inform and encourage them to be active participants in matters that affect the poor and marginalized in the U.S. and elsewhere.

"We come together this weekend to reflect on the realities of the world, and to do the work of transforming structures through participation in public dialogue, where decisions are made," said Chris Kerr, the solidarity network's executive director.

Those realities include racism, xenophobia, mistreatment of the Earth and marginalization of people because of their gender, sexual identity, immigration status and other forms of injustice, Kerr said.

On Nov. 17, attendants listened to teens Juan Pablo Torrecillas and David Quezada, who live "binational lives" in the border cities of Nogales, Arizona, and Nogales, Mexico, serving food and spending time with migrants at a soup kitchen run by the Kino Border Initiative. The organization is associated with the Society of Jesus in the U.S. and Mexico, the Missionary Sisters of the Eucharist, and the dioceses of Tucson, Arizona, and Nogales, Mexico.

Torrecillas talked about meeting women and children stranded at the border as he served them and listened to the hardships that led them to flee from their home countries. He spoke about how he worried for their safety, wishing he could do something for them.

"It's an awful feeling," he said. "The system of immigration is broken."

Quezada spoke of how he admired a 22-year-old from Honduras he met on the street, hardworking and with dreams, cobbling to make a living. He was saving to buy him a pair of shoes. Among the crowd of those who listened to the teens, one related that he experienced backlash from his peers at school as he talked about helping migrants.

"You can't fight ignorance with ignorance," Torrecillas told him.

They counseled him to keep helping those he could and said that even as the situation on the border was "heartbreaking," they were resolved to help.

"It's awful to see kids treated like animals," Torrecillas said. "It's not their fault but we have to try to help them."

Most of the dozens of topics the students and young adults heard the first two days dealt with themes negatively affecting those on the margins of society.

The event, now in its 27th year, was inspired by the work of St. Ignatius of Loyola, founder of the Society of Jesus, and a group of Jesuits killed in 1989 because of their work with the marginalized of El Salvador. Organizers expose the attendants to topics inside and outside of the United States that involve the poor, the oppressed and disenfranchised, and try to spring them into action of some form. It's grown so much — some had to be turned away, Kerr said — that it's moving to a bigger venue in 2021. 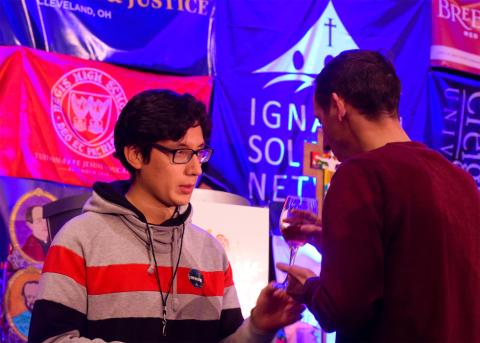 An Ignatian Family Teach-In attendee receives holy Communion Nov. 17, 2019, during the social justice gathering in the Washington suburb of Arlington, Va. More than 2,000 students from Jesuit high schools, colleges and universities came together to celebrate and worship together Nov. 16-18. (CNS/Sydney Clark)

One of the most popular talks of the weekend was by Jesuit Father James Martin of America magazine Nov. 16. He spoke of how, when he went to school in the late 1970s and 1980s, the university he attended sponsored a day supporting the gay community and it meant showing solidarity with that community by wearing jeans. Though he wore jeans all the time, he didn't want to do so on that occasion, "not because I was against gay people, but the idea of being in any way associated with gay people back then ... was so frightening for me," he said

However, after he became a Jesuit novice in the late 1980s and heard about the death of the Jesuit martyrs of El Salvador, he said he felt at that moment that perhaps he didn't understand what Christianity truly was. But seeing the Jesuits give their lives for the marginalized, as well as four American churchwomen also killed in El Salvador, changed him.

After entering the order, he felt his place was to be with people on the margins, whoever that might be. That journey took him to work in East Africa with refugees and later with migrants. But when he went to work in New York City, he came across gay and lesbian men and women and began from time to time advocating for them through his writing in the Jesuit-run America magazine.

"But I never thought that I would really be invested in that ministry," he said.

However, that changed after a mass shooting at a gay night club in Orlando, Florida, in 2016, when he said he noticed church leaders offered their condolences for other groups after such incidents, yet they had a hard time speaking out for those who died in Orlando. Even when condolences were offered, the word "gay" didn't appear in their statements.

"So, I wrote this talk, which was very simple, and it was based on the catechism, which calls for respect, compassion and sensitivity for LGBT people or for people of homosexual orientation," he said.

The group also listened to a keynote speech on solidarity by 80-year-old Sr. Peggy O'Neill, of the Sisters of Charity, who has worked in El Salvador for 30 years.

"Solidarity is an attitude, a virtue, a duty. It is a firm determination to commit oneself to the common good," she said, encouraging the students to "get a life."

She told the group, headed to advocate in the halls of Congress two days later, about what her time in El Salvador taught her, learning from those who had little but shared whatever they had with others, and of the faith they showed in times of deep tragedy, encouraging the students to build a better world.

"I want to challenge you, really, to get a life. ... Be midwives to assist at the birthing of a world so long emerging but truly off course," she said. "Help birth new economic structures, new agents of evolution, new ways of seeing the universe, maybe even to see the universe as the ecstasy of God."

All living things are evolving and connected and share in the DNA of God, she said.

"I dare you to be midwives of solidarity," she said. "Get a life where you are not alone. Find people you love and people who love you, get a life in which you are generous."