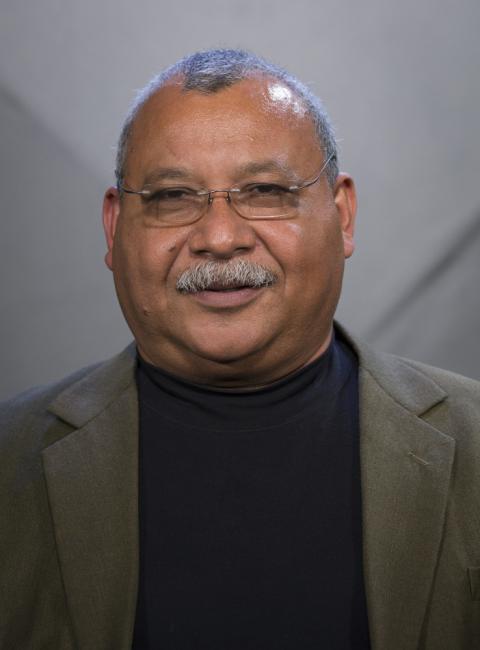 Jesuit Fr. Ismael Moreno Coto, better known as "Padre Melo," poses for a 2014 photo in Washington. The Society of Jesus has denounced threats made against the outspoken Honduran priest, who has highlighted accusations of widespread irregularities in the Central American country's recent presidential election. (CNS/Tyler Orsburn)

The Society of Jesus has denounced threats made against an outspoken Honduran Jesuit who has highlighted accusations of widespread irregularities in the Central American country's recent presidential election.

The Conference of Provincials in Latin America and the Caribbean said in Dec. 30 statement that the social media hostilities against Fr. Ismael Moreno Coto — better known as "Padre Melo" — were "reminiscent of the death threats which circulated in El Salvador before the murder of Jesuit Fr. Rutilio Grande," a Salvadoran Jesuit murdered in 1977. The Jesuits also defended eight other regional activists being threatened.

"All of the accusations are lies aimed at counteracting the grass-roots organizing and the peaceful and democratic resistance which the accused, along with the people of Honduras, are carrying out at a moment when the popular vote has been disrespected by John Orlando Hernandez and his allies," said the statement, referring to the incumbent president and official electoral victor.

"This is an attempt to create terror in the people as a strategy to demobilize them," said the statement, signed by Fr. Roberto Jaramillo, conference president. "We hold Juan Orlando Hernandez and his allies responsible for the safety and physical and moral well-being of the nine people falsely accused."

The Nov. 26 Honduran elections returned Hernandez to power, but only after a lengthy vote-counting process marred by unexplained delays and improbable technical difficulties. The incumbent also overcame a large lead held by opposition candidate Salvador Nasralla, who was ahead with a majority of votes counted before a long suspension of the count by the country's electoral tribunal.

The U.S. government, which has worked closely with Hernandez's administration on immigration and security issues, recognized the victory Dec. 22, despite irregularities noted by election observers and calls for new elections.

Hernandez has called for dialogue but has been rebuffed by the opposition, including Moreno, founder of Radio Progreso. At least 30 people have been killed in protests since the election, according to observers, who allege police repression. A Radio Progreso transmission tower was toppled in December in an act Moreno called "sabotage."

"I'm receiving accusations that put my life at risk," he tweeted Dec. 29. "This is the open dialogue that the president speaks about and is backed by the U.S. Embassy."

Moreno has long been outspoken in his criticism of Hernandez and the country's business class, both accused of corruption, improperly capitalizing on concessions and privatizations and failing to stop the slayings of social and environmental activists.

The Honduran bishops' conference said in a Dec. 21 statement that the country's electoral tribunal "has not overcome the lack of certainty regarding the election results," but called for calm and for Hondurans to strive for "a grand social pact through dialogue."

Calls for dialogue have fallen on deaf ears previously, including after the 2009 coup, when the opposition accused the newly installed president of using the prospect of talk as a means of buying time.

The 2009 coup occurred after opponents accused then-President Manuel Zelaya of illegally preparing an attempted re-election; Honduras had allowed only one four-year term.

However, Hernandez, who supported the coup, convinced the Supreme Court to allow his own attempted re-election — something observers say has poisoned the prospects of dialogue.

"You can't say the government has been terrible in everything," said Fr. German Calix, director of Caritas Honduras. "What people did not tolerate is that the law was violated so (Hernandez) could run as a candidate again. (They) feel like the law has been mocked and could continue being mocked."