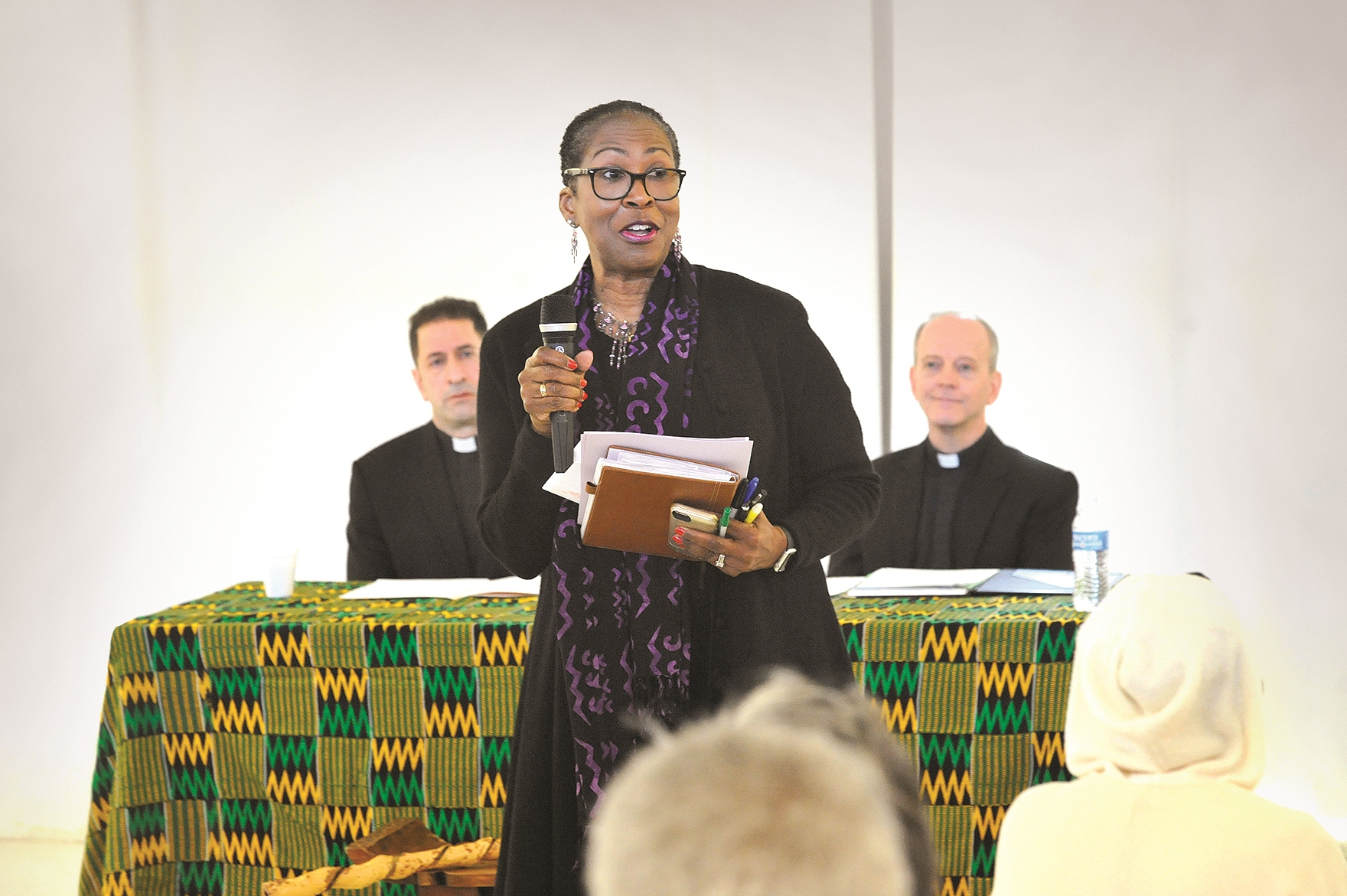 Cheryllyn Branche, vice president of the GU272 Descendants Association, speaks at a listening session Dec. 9, 2017 for descendants of 272 enslaved persons the Jesuits of Georgetown University sold to a Louisiana plantation owner in 1838. At left is Jesuit Fr. Tim Kesicki, president of the Jesuit Conference of Canada and the United States, and at right is Jesuit Fr. Bob Hussey, provincial of the Jesuits' Maryland Province. (CNS/Clarion Herald/Peter Finney Jr.)

The Jesuit order is pledging to raise $100 million for descendants of enslaved people once owned and sold by their order as a way to make reparations and also help the nation move toward racial healing.

The funds will be placed in a new partnership called Descendants Truth and Reconciliation Foundation formed by the Jesuit order and the GU272 Descendants Association — named after the 272 enslaved men, women and children who were sold by the Jesuit owners of Georgetown University to plantation owners in Louisiana in 1838.

"Our shameful history of Jesuit slaveholding in the United States has been taken off the dusty shelf, and it can never be put back," said Jesuit Fr. Tim Kesicki, president of the Jesuit Conference of Canada and the United States.

"Racism will endure in America if we continue to turn our heads away from the truth of the past and how it affects us all today. The lasting effects of slavery call each of us to do the work of truth and reconciliation," he added in a release announcing the new partnership.

The priest told The New York Times the Jesuits have already put $15 million into a trust established to support the foundation, whose governing board will include representatives from other institutions with roots in slavery. He also said the order has hired a national fundraising firm to help raise the rest of the funds within the next three to five years.

Joe Stewart, acting president of the new foundation, is a retired corporate executive and one of more than 1,000 descendants of Isaac Hawkins, an enslaved man sold by Georgetown University.

In the announcement of the new partnership, he said the group would "set an example and lead America through dismantling the remnants of slavery and mitigating the presence of racism." 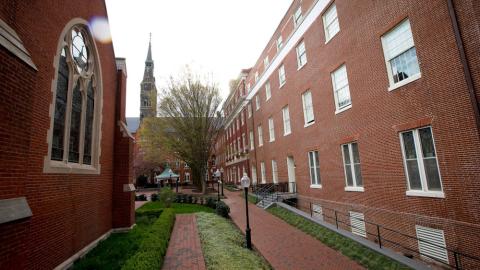 A building on Georgetown University's campus, renamed Isaac Hawkins Hall, right, is seen April 4, 2017. Previously known as Mulledy Hall and later Freedom Hall, it was renamed in 2017 for one of the 272 enslaved men, women and children sold by Georgetown's Jesuit community to plantation owners in Louisiana in 1838. Hawkins was the first enslaved person listed in the sale documents. (CNS/Tyler Orsburn)

He also said it would "support the educational aspirations of descendants for future generations and play a prominent role in engaging, promoting and supporting programs and activities that highlight truth, accelerate racial healing and reconciliation, and advance racial justice and equality in America."

Cheryllyn Branche, president of the GU272 Descendants Association, said that from its start this group has worked on identifying and rebuilding ancestors' families impacted by slavery and to create investments to help them move forward, an effort the new partnership can continue for future generations.

The group also aims to work with institutions of higher education and other entities that profited from slavery.

In the past several years, Georgetown University and the Jesuit order which sponsors the school, has been looking closely at what it can do to make reparations for the sale of enslaved people, which helped finance the school's operations.

In 2017, Georgetown and the Jesuits' Maryland Province apologized for their roles in the sale of enslaved individuals for the university's benefit at an event with over 100 descendants of the enslaved.

That same year, the university renamed a building as Isaac Hawkins Hall, named after the one of the enslaved people sold by the university. Another building, once named for Jesuit Father William McSherry, who helped with the 1838 sale, has been renamed Anne Marie Becraft Hall in honor of a free woman of color and pioneer educator who founded a school near the campus for Black girls in 1820.

In 2019, undergraduate students at the university voted overwhelmingly to pay a new student fee that would be for paying reparations to the descendants of the enslaved who were sold by the school.

A few years before that, the university announced that descendants' families will receive the same admissions benefits as other members of the Georgetown community, including faculty, staff and alumni.

"We have honored a commitment that we made years ago in meeting the descendant community — that, as we proceed, we would find ways to proceed together, in collaboration and partnership," John DeGioia, Georgetown's president, said in a March 16 letter to the Georgetown community.

"It is with hope and gratitude that we begin this next phase of our work in partnership with the descendant community and the Society of Jesus, as we continue to grapple with and respond to the enduring legacies of the enslavement of people of African descent," he added.

"The institution of slavery and systemic racism are tragic parts of America's history, and we have a responsibility to drive sustainable change for the people and communities who have been impacted by this bitter legacy," said Brian Lamb, the global head of Diversity and Inclusion at JPMorgan Chase, a major supporter of the foundation.

In a statement, he said the bank was proud to support this new foundation as it seeks "solutions through truth, racial healing and transformation to help dismantle the legacy of slavery and to build a more equitable society both now and for generations to come."