'The Joneses': The consequences of covetousness 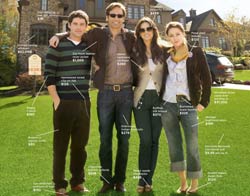 Ben Hollingsworth as Mick, David Duchovny as Steve, Demi Moore as Kate and Amber Heard as Jenn in "The Joneses"

“They are not living the American dream; they are selling it” (the tagline for the film “The Joneses”).

Kate (Demi Moore), Steve (David Duchovny), Jenn (Amber Heard) and Mick (Ben Hollingsworth) Jones move into a rich suburb of Atlanta. They look like the perfect American family. Their neighbors, Larry (Gary Cole) and Summer (Glenne Headly) welcome them with a basket of beauty supplies that Summer is selling.

The kids start high school. Kate makes an appointment at an upscale spa. Steve heads for the golf club. They gather at the end of the day to check on things and then head for their rooms. They are not a family but a “unit,” hired by the firm Life Image, to sell lifestyle by self-marketing, to create contact lists and connect to consumers who then connect to other consumers. Each of the Joneses has at least one close contact who becomes a disciple, lured by the promise of proximity to someone who is a leader of the lifestyle pack.

The Joneses are paid posers whose goal is to make everyone want to be just like them via the ripple effect.

Their supervisor, KC (Lauren Hutton), checks in on the unit monthly and gives them reports of their ripple effect sales of select upscale brand items. She tells Kate, the head of the unit, that Steve needs to focus and up his numbers. KC tells the unit, “Sell yourself and they will want what you want.”

Steve seems like he is going along for the ride and is interested in a relationship with Kate. He also wants the unit to be a family and relax. Kate is all business and tells him to focus. This makes him turn on the charm even more at the country club. All of a sudden his sales top the charts.

Marketing experts know that with rare exceptions, people aspire to “keep up with the Joneses” and be like the people next door who seem to have it all and appear to be upwardly mobile. Audiences came to understand the term “product placement” in film and television through Peter Weir’s 1998 film “The Truman Show.” It starred Jim Carrey as Truman (true man), the first child ever adopted by a corporation. His entire life on the island community of Seahaven is a 24/7 television program directed by the all-seeing, all-knowing Christof (Ed Harris). Truman’s wife, Meryl (Laura Linney), displays household products whenever she interacts with Truman. Slowly, he begins to question his identity as well as the status quo of his humdrum life.

In “The Joneses,” Kate is the head of the unit embedded in this well-heeled suburb and the Joneses take product placement to the extreme by burrowing into the community with their lifestyle characterized by their home and what they own, drive, and the products they use. They are readily accepted because their possessions are interpreted as status. And no one asks any questions.

Just like Truman, however, Steve has an existential crisis and begins to question the lucrative new job (he is a failed car salesman) and how it affects him. He sees nothing wrong with wanting to be a family, not just act as one. As he twirls his fake wedding ring in one scene, he asks Kate, “What would it take to meet a woman I could be a better person for?” Kate, who has already had six fake husbands during her marketing career, resists Steve’s attempts to be more than human marketing machines.

Even in these years of economic distress, when people have less disposable income and even less credit, “The Joneses” is a film that makes sense because consumerism is so much a part of our culture and economic system. The thoughtful viewer will notice how well Borte understands the psychology of advertising and marketing and how much people want to be accepted and “cool.” He makes a strong point when KC presents a series of new products that includes a drink with 17 percent rum, packaged in what looks like a kid’s juice box. KC tells the unit that this is not to be used with young people, but Mick knows better because liquor companies design products and packaging for a youth market, all protests to the contrary notwithstanding. There are consequences when Mick spices up a teen party with the drink and things start to fall apart for the unit.

Even more distressing and dire are the results of Gary’s attempts to model Steve in every way.

“The Joneses” is an entertaining cautionary tale for us Americans, who per capita use the highest percentage of the earth’s resources and create the most trash. The film digs into our national superficiality. The movie reminds us to ask questions, not only of the messages that information and entertainment media communicate, but of lifestyles of the rich and famous that dominate the media. “The Joneses” is a study of human relationships and our natural desire to connect to one another in meaningful ways.

Leo Tolstoy wrote, “If you want to be happy, be.” “The Joneses” invites audiences to reflect on what transcendent happiness really means and how things will not fill the yearning in our hearts.

'The Joneses': The consequences of covetousness