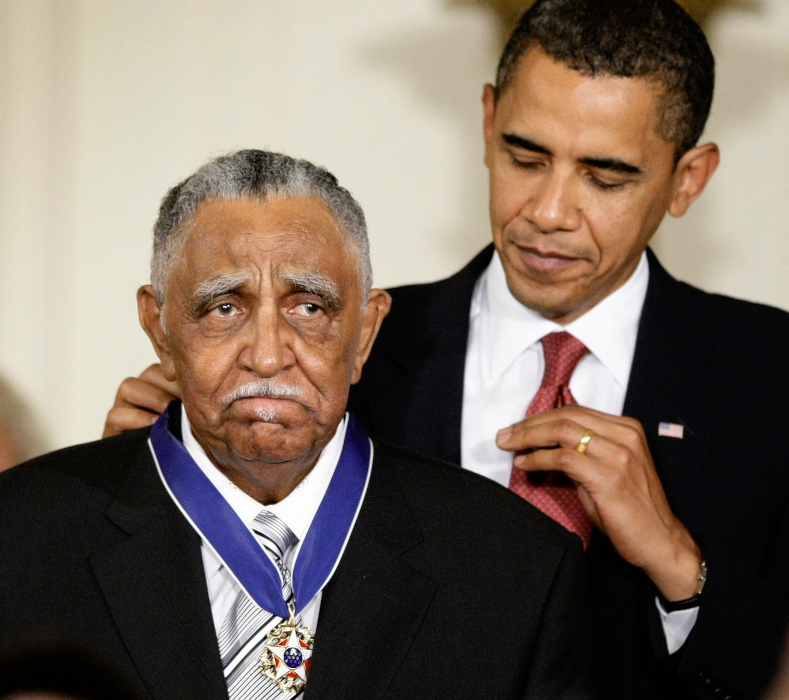 "Tonight, the great Reverend Joseph E. Lowery transitioned from earth to eternity," the King Center in Atlanta tweeted. "Our thoughts and prayers are with his family. He was a champion for civil rights, a challenger of injustice, a dear friend to the King family. Thank you, sir."

For more than 50 years, the United Methodist clergyman was involved in advocacy work, from desegregating buses to protesting apartheid to drawing attention to the AIDS crisis in Africa and the U.S. He co-founded the Southern Christian Leadership Conference with King and served as its president for 20 years.

"His chapter in American history and African American history, in particular, is legendary, and his leadership as a part of the original Martin Luther King Jr. team cannot be exaggerated," said the Rev. Otis Moss Jr., a retired Cleveland pastor who performed the wedding of Lowery and his wife, Evelyn Gibson Lowery, who died in 2013.

"The sacrifices and the dangers, the toils, the snares that he and Mrs. Lowery faced day and night across one of the most challenging periods of the 20th century: This is now a part of the indelible history of the American experience," Moss continued.

Lowery narrowly escaped harm in 1963 when King turned over a hotel room to him in Birmingham, Alabama, where desegregation agreements with the city had just been announced. Lowery instead decided to head home to Nashville, Tennessee — and the hotel room was destroyed by a bomb.

Asked whether the dangers ever made him want to halt his civil rights work, Lowery told Religion News Service in 2011 that they might have, but only for a "fleeting moment. It didn't last long because we didn't think we had any choice. It was a calling."

Former President Barack Obama recalled Lowery's role as an advocate for civil rights and a mentor to the next generation.

"From those early days of the movement to his long leadership of the Southern Christian Leadership Conference, he did so much to carry us ever closer to the just, fair, inclusive, and generous America promised in our founding ideals," Obama said in a Saturday statement. "With boundless generosity, patience, and moral courage, he mentored and encouraged a whole new generation of activists and leaders."

When Obama presented Lowery with the Presidential Medal of Freedom, the nation's highest civilian honor, in the summer of 2009, he called the veteran of boycotts and marches "a giant of the Moses generation of civil rights leaders."

Describing himself as a "small-town preacher," Lowery, a native of Huntsville, Alabama, marveled at his receipt of the medal.

"I haven't done nearly as much as I should have done,'' he told reporters after the ceremony.

"None of us has. In spite of all the progress we've made — and we've come a long way — we still have a mighty long way to go," he said.

When Lowery rose for the benediction at Obama's 2009 inauguration, he recalled the country's racial challenges even as the event marked the entry of the first black president into the White House.

"Lord, in the memory of all the saints who from their labors rest, and in the joy of a new beginning, we ask you to help us work for that day when black will not be asked to get back, when brown can stick around, when yellow will be mellow, when the red man can get ahead, man, and when white will embrace what is right," Lowery recited, paraphrasing "Black, Brown and White," a song by blues singer Big Bill Broonzy that was sung during the civil rights movement.

"It had bite to it," said Forbes. "He's the guy who has memorable expressions that carry value and often critique — and particularly prophetic critique — of a nation."

Three years earlier, when Lowery took his turn at the podium for the funeral of King's widow, Coretta Scott King, he poetically spoke of a heavenly reunion of the couple after almost 40 years. But he also took advantage of the opportunity to criticize President George W. Bush, who was just feet away on the dais.

His work with the SCLC, which he helped create in 1957, initially brought black clergy together to effect change during the civil rights movement, spurred on by the yearlong boycott of the then-segregated bus system in Montgomery, Alabama. He was assigned to bring demands for voting rights to then-Governor George Wallace at the end of the Selma-to-Montgomery march in 1965.

Decades later, he moved on to other justice issues, including boycotts to defeat apartheid in South Africa.

The Rev. Timothy McDonald, past president of Concerned Black Clergy of Metropolitan Atlanta, recalled working with Lowery at the SCLC in the 1980s in protests aimed at stopping companies like the Winn-Dixie grocery stores from carrying South African products. He said Lowery always meshed his roles as pastor and civil rights leader.

"He never saw them in contradiction," McDonald recalled. "The gospel is social and political. It's all-encompassing. ... He was not conflicted at all in his pastoral responsibilities and his civil rights activity."

In the 2011 interview with RNS about his first book, "Singing the Lord's Song in a Strange Land," Lowery said sermons were an important aspect of the civil rights movement.

"I've always had no difficulty mixing," said Lowery, whose book was about sermons and his work on race relations and human rights. "I didn't divide the world between sacred and secular. I think that it's all sacred, all God's world and all God's will."

Lowery retired from the pastorate of Atlanta's Cascade United Methodist Church in 1992 after helping it raise money to build a larger edifice to house its growing membership. He previously pastored churches in Birmingham and Mobile, Alabama, and another in Atlanta.

Bishop Vashti McKenzie of the African Methodist Episcopal Church, who visited Lowery when he was hospitalized before the inauguration, said Lowery's outspokenness was courageous for the times.

Lowery, who often was hailed as an icon of the civil rights movement, always found a humorous way to respond to the verbal accolades, said the Rev. Gerald Durley, a president of the Regional Council of Churches of Atlanta. One of his favorite lines when he got a standing ovation was: "Now you better sit down before I take up a collection."

Asked by RNS in 2011 if he thought his work was mostly complete after praying at Obama's inauguration and receiving the Presidential Medal of Freedom months later, Lowery responded: