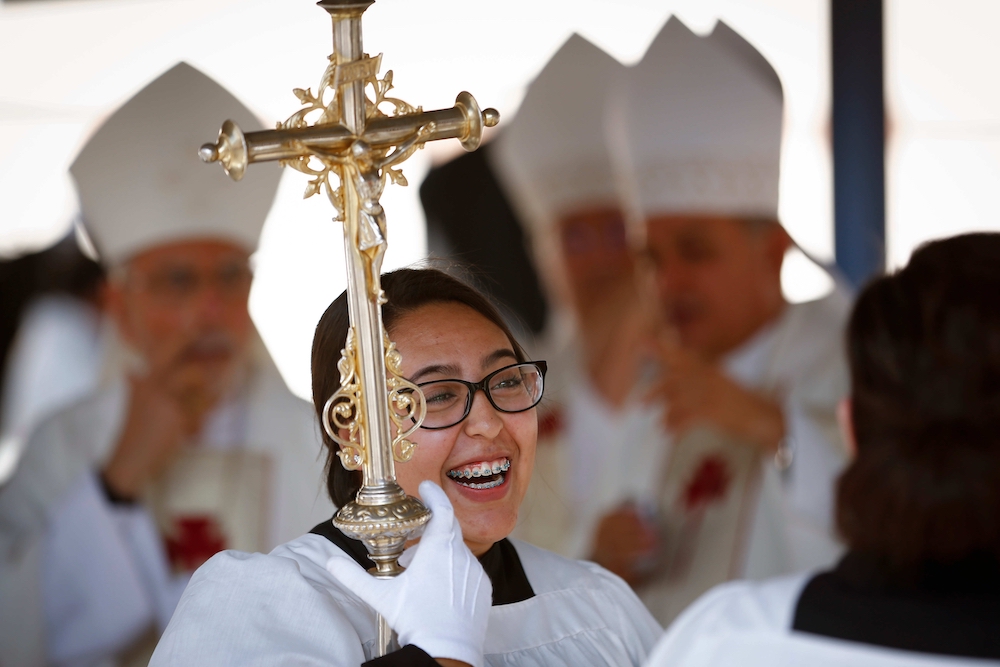 Glenda Lopez smiles as she and other altar servers wait for the start of Mass at the international border in Nogales, Arizona, Oct. 23, 2016. The pope recently changed Vatican law to allow all "lay persons," not just men, to be formally installed as lectors, altar servers and eucharistic ministers. (CNS/Nancy Wiechec)

"Am I the only one who is like: wait, women aren't explicitly allowed to be lectors and altar servers before this?" Flora Tang wrote on Twitter Jan. 11.

She was not, in fact, the only one. (For starters, more than 30 people liked her tweet).

In the wake of Pope Francis' announcement Jan. 11 that officially opened altar serving, lectoring and eucharistic ministries to all "lay persons," rather than just men, Catholic organizations and individuals expressed a mix of emotions, including joy, disappointment and a bit of wry humor — or just plain surprise.

Some saw the move as a positive step that more fully recognizes women's roles in the church.

In a Jan. 12 statement on its website, the International Union of Superiors General, an organization of women religious, said the pope's declaration recognizes changes that were already happening on the ground as women fill important ministries within their churches.

The document, "with its universal character, is a confirmation of the Church's path in acknowledging the service 'of so many women who have cared and continue to care for the service of the Word and the Altar,' " the group said in the statement.

Prior to the pope's recent apostolic letter, titled Spiritus Domini, all laypeople could serve temporarily as lectors and acolytes (altar servers and eucharistic ministers), but bishops had the option of restricting such ministries to men. Now, people of any gender can be formally installed in these roles. 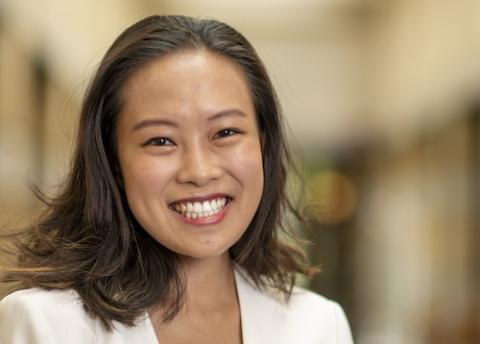 Many — particularly advocates for gender justice in the church — saw the move as a small step in the right direction but were frustrated that the pope didn't go further.

Kate McElwee, executive director of the Women's Ordination Conference, a Catholic feminist organization, said in a Jan. 11 statement that the Vatican law change was "not a radical shift" but showed that Francis is willing to adapt church teaching to reflect the times and what laypeople believe. This openness, she said, could lead to other moves toward gender equality.

"While we will continue to uncompromisingly advocate for the full equality of women," McElwee said, "the strengthening of the baptismal equality of all people through this change will impact communities that use the Roman Catholic Church's unjust treatment of women to defend oppressive practices in society."

Similarly, ethicist Julie Hanlon Rubio said she was happy to see the pope responding to the reality that women often play a crucial role in keeping churches running.

According to a 2015 report by the Georgetown University Center for Applied Research in the Apostolate, there are roughly 40,000 lay ecclesial ministers — both paid and volunteers — nationwide, of whom 80% are women, including women religious.

Rubio, a professor of Christian social ethics in the Jesuit School of Theology of Santa Clara University, said her mother was one of the many women who performed important duties in church when Rubio was growing up in the 1970s.

It was only through her academic research that she realized how controversial women's participation in the Mass was in many churches in the decades after the Second Vatican Council.

"What I hope we can celebrate at this moment is the witness of women like my mom, and like so many others we have seen on the altar for decades, fulfilling their baptism and acting as Christian disciples and leaders in the community," Rubio said.

The Rev. Kori Pacyniak, pastor of St. Mary Magdalene Apostle Catholic Community, an independent church congregation in San Diego, said when they were a kid, their parents — who were Polish immigrants — specifically chose a church without Polish language Mass options because it offered greater gender equality. For instance, it allowed all children to be altar servers, not just boys.

"I remember visiting other Polish American churches in the U.S. where family went, and I would go up to the priest and be like, 'Oh, I'm an altar server,' and they would just look at me like, 'No, you're not,' " said Pacyniak, who is non-binary.

Pacyniak remembered hearing some priests say women weren't allowed near the altar unless they were cleaning.

However, while this step by Pope Francis does send a clear message to more conservative churches that it's time to end gender discrimination among altar servers and lectors, Pacyniak said it won't change anything in most U.S. churches.

Some Catholics were shocked to find out that women had still been barred from being officially installed as lectors and altar servers even after Vatican II.

Tang, a doctoral student in theology and peace studies at the University of Notre Dame, told NCR she had seen women as altar servers and lectors, so she was surprised that the law needed to be changed.

Her first time lectoring came when she was doing service work in Kolkata, India — the place where St. Teresa worked — during a Mandarin Chinese-language service held in the saint's tomb, which is also a chapel.

"I just remember that being really powerful because I, as a new Catholic convert, got to proclaim the word in my own language or my mother tongue, and at a place that's very sacred and special to my heart," Tang said.

Similarly, Tia Noelle Pratt, who holds a doctorate in sociology from Fordham University and studies systemic racism in the Catholic Church, said lectoring — which she has done since her youth — has been personally meaningful for her.

"As an African-American and a woman, I took that role very seriously," she said in an email. "I know that participating in Mass in that kind of visible way is important and is a step in the right direction toward having a Church that is equitable." 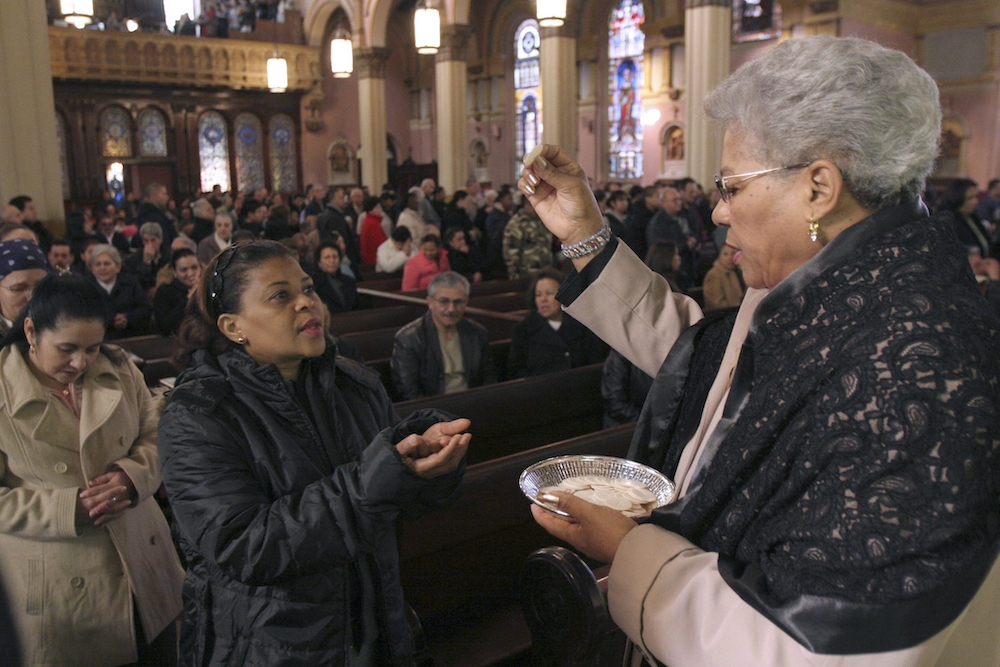 A eucharistic minister distributes Communion during Mass in 2018. According to Georgetown University's Center for Applied Research in the Apostolate, women perform the vast majority of lay ministries in their churches. (CNS/Gregory A. Shemitz)

Tang said she hopes priests won't find other reasons to exclude women from these ministries — by reserving them for seminarians, for instance — and that the slow pace of change in the church is giving her "more despair than hope" when it comes to gender equality.

Taylor Ott, a doctoral candidate in theological and social ethics at Fordham University, said she was having a hard time getting excited about the law change because of how little it does to dismantle patriarchy in the church.

"It's so far away from changing the way that we talk about women, or including women in high level decision making, or ordaining women or anything like that," Ott said. "In comparison to how far we have to go, this seems like such a small thing."

For some LGBTQ Catholics, the gender-neutral language of the law change (its use of "lay persons" instead of "lay men and women") was welcome but raised additional questions about who the law might include.

"Left unclear is whether transgender, non-binary, and gender non-conforming people similarly must be welcome to these liturgical roles," said Robert Shine, associate director of the LGBTQ Catholic advocacy organization New Ways Ministry, in a Jan. 12 post on the group's website.

"These Catholics have, in a sense, been denied personhood in a church discourse tied to gender complementarity."

Pacyniak said while the law's new gender-neutral language was not necessarily intentional, it gave them hope because it's a step away from the usual gender binary in church teachings.

"Why don't you just put 'person' every time you say 'man' in all the documents — that would solve a lot of problems," they said.

Many Catholics who commented on the new law said they wanted to see the church reopen the diaconate to women, expand the priesthood beyond celibate men, or remove gender and sexuality as obstacles to church leadership entirely. 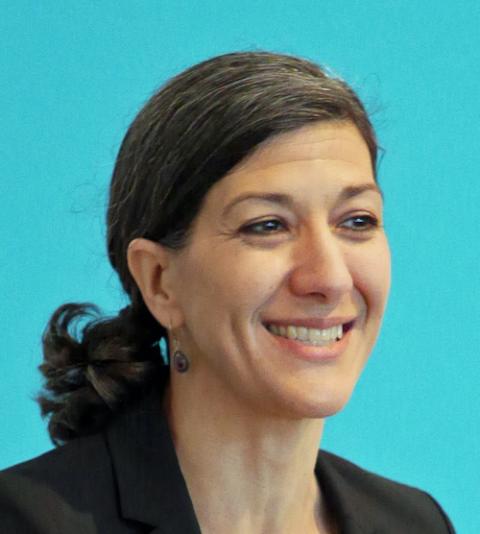 Rubio said for her, the next step would be to see women being ordained as clergy, but that the priesthood itself needs reform to get rid of clericalism.

"It can't be about just adding women to that," she said. "We need to reconceive how we think of the priesthood."

Ott said she was disappointed to see that the pope did not heed calls from a 2019 synod of bishops from nine Amazonian countries to restore the female diaconate and allow married men to become priests.

She said she's also frustrated that the pope's commissions to study ordaining women as deacons, created in 2016 and again in April 2020, haven't led to any significant changes either.

Ott also chafes at the way church documents describe women, in her words, as "some very delicate little flowers that have some sort of special knowledge that no one can really even say what it is because it's so unearthly."

She said women and non-binary people need to be given real power in the church so they are present anywhere major church decisions are being made.

Pacyniak said for them, the ultimate goal is a church that does not discriminate based on gender or sexuality, adding that there is nothing inherent about being a cisgender man that uniquely qualifies a person for leadership.

"I'm looking at the Catholic Church — it's so concerned about declining numbers of clergy — like, 'I have a very simple solution for you,' " Pacyniak said.

Pacyniak, a doctoral student at the University of California-Riverside who holds graduate degrees from Harvard Divinity School and Boston University School of Theology, said they'd be willing to head back to school at a seminary if it meant they could be ordained in the canonical church.

They said the pope's apostolic letter is a "small move" that could create a "ripple effect" across the church.

"So keep dropping a couple more stones. Keep moving in that direction," Pacyniak said. "Let the spirit move you until we can really fulfill Galatians 3:28 — 'In Christ, there is no male or female, no Jew or Greek' — [until] we see that this beautiful diversity that we have in the human race is reflected in all levels of church leadership."

A version of this story appeared in the Feb 5-18, 2021 print issue under the headline: Vatican law change on women's roles invokes joy, frustration.