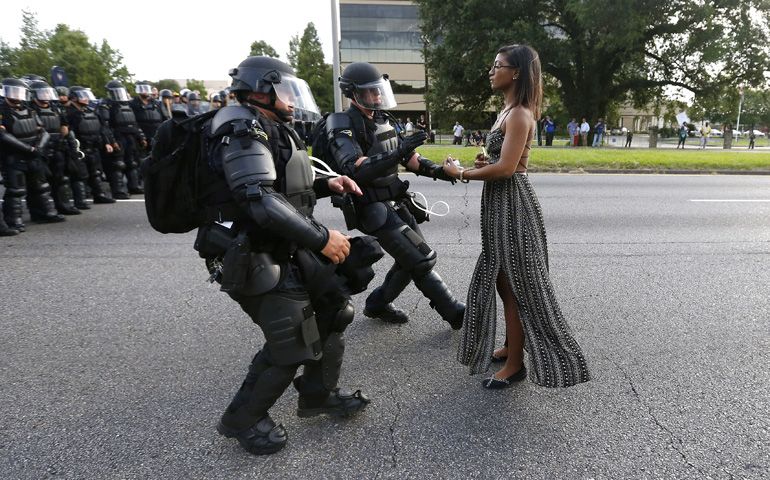 Ieshia Evans is detained in early July by law enforcement as she protests the fatal shooting of a black man by police near the headquarters of the Baton Rouge Police Department in Louisiana. (CNS/Reuters/Jonathan Bachman)

Washington — It began with the fatal shootings of unarmed black men and women by police. It was exacerbated in the summer when, on July 7, a gunman in Dallas opened fire on police during a march, killing five officers in a presumed act of retaliation.

Catholic church leaders such as Archbishop Wilton Gregory of Atlanta in August called on others "to resolve to address the issues that lie beneath these acts of violence." But no one imagined then that frustrations about race and racism in the United States, which began with the police shootings, were about to get worse in the later part of 2016.

At a news conference during the U.S. bishops' general assembly in Baltimore in November, Gregory said the reaction to the presidential election had added to an existing tension this year over matters of race in the country.

Those who work with multicultural communities, such as Jordan Denari Duffner, a research fellow at Georgetown University's Bridge Initiative, which studies Islamophobia, said comments made during the campaign led to "a general kind of anti-otherness that has emerged." When it comes Islamophobia, she said, anyone who "looks Muslim," be it because of the color of the skin or what they may wear, can evoke a reaction from others that can lead to attacks, she said.

This kind of "anti-otherness" in the air, some say, has resulted in a rise of hate and racism. The Southern Poverty Law Center said that 10 days after the election, almost 900 reports of harassment and intimidation from across the nation were recorded. Many took place in public places or places of worship, at work, at schools and even in grocery stores.

In a recent column for Catholic News Service, Gregory said "the belief that one group is superior to another due to race -- is a grave moral disease whose recurrence, aggressiveness and persistence should frighten every one of us." Racism has "clearly not been cured in our nation," he said.

He warned that "whenever one can play on the fears of some people and depend upon the ignorance of others, racism flourishes. As a political strategy, such taunting may win votes, but it destroys national unity and our future."

Economic inequality, which plagues different communities, he said, has been used to pit one group of people against another and "when one group is made to feel that its economic situation results from the coddling of another, the reaction is often a racist response," Gregory said.

That's when a country starts seeing attitudes such as "immigrants are taking our jobs" and "public aid only rewards laziness," and "poor and struggling white people have been forgotten," he said.

He added that "conditions necessary for the transmission of racism were thoroughly mixed with such attitudes during the recent election process. Left untreated, the prognosis is bleak."

Sr. Patricia Chappell, executive director of Pax Christi USA, said this election "showed the racial but also economic polarization that our country is in the midst of" and which had become apparent earlier in the year.

Chappell, who is black and is a Sister of Notre Dame de Namur, said she has never seen the level of violence and hatred against so many groups -- Muslims, immigrants and others -- as she saw during the election and which has caused much concern.

Even in times of strife, those like Chappell and Duffner say, some positive things have come about.

Duffner said solidarity between groups that have been targets of hate, such as between Jews and Muslims, or the black community and those who have been victims of Islamophobia, is visible. She noted that members of the Catholic church need to do more to reach out to and humanize groups that were demonized during the election.

She cited figures from a 2016 Brookings Institute and Public Religion Research Institute poll that showed the difference between white Catholics and Catholics of other ethnic and racial backgrounds. It showed that, even as the church becomes more diverse, certain biases persist and are based on a person's racial background.

"As Catholics, we need to be aware of racial and religious biases," Duffner said.

For its part, Pax Christi USA has renewed its commitment to work for racial justice and equality, Chappell said, will continue educating others and speak out against injustice. She added that to say that in order to "make America great again," one must ban Muslims from the United States and attack immigrants and minorities, which "is not the way to develop relationships" that can help the country or humanity, Chappell said.

The Trump campaign, she said, has to acknowledge comments made that played into the fears of others and that helped propel some in the white supremacist movement. During his campaign, he called for a pause on admitting Muslim refugees into this country until, as he described it, a system was in place for "extreme vetting" of them. He talked about deporting immigrants who are in this country without legal permission.

President-elect Donald Trump has on several occasions said he is not racist and his transition team released a statement Nov. 29 saying he denounces racism in all its forms.

"To think otherwise is a complete misrepresentation of the movement that united Americans from all backgrounds," the statement said. "For anyone to conclude these senseless acts are the result of the election is disappointing and gives an excuse for their appalling behavior."

But just to look at his Cabinet and administration picks, and one doesn't get the sense that Trump or his picks are allies of people who are marginalized and oppressed, Chappell said.

"I don't see signs of him reaching out to those communities that traditionally continue to suffer from oppression," she said. "I hope he will. I am hopeful ... I want to hold him at his word and so for me right now, we have to wait and see."

"I question his motives," she continued. "But on the other hand, I have faith, and I have to trust and wait and see how he responds in terms of really moving toward unifying America. I think we have to find a way as a country to again embrace that all are welcome, all have place and we just have to find a way to pull together because we are all brothers and sisters."

Gregory said the new administration "must recognize and address the deadly impact that racism and racist behavior continues to inflict upon our nation and its people. Racist words and slogans can inflame violence and do great harm to the fabric of our country."

Justice | 2016: The year racism and fear make a comeback