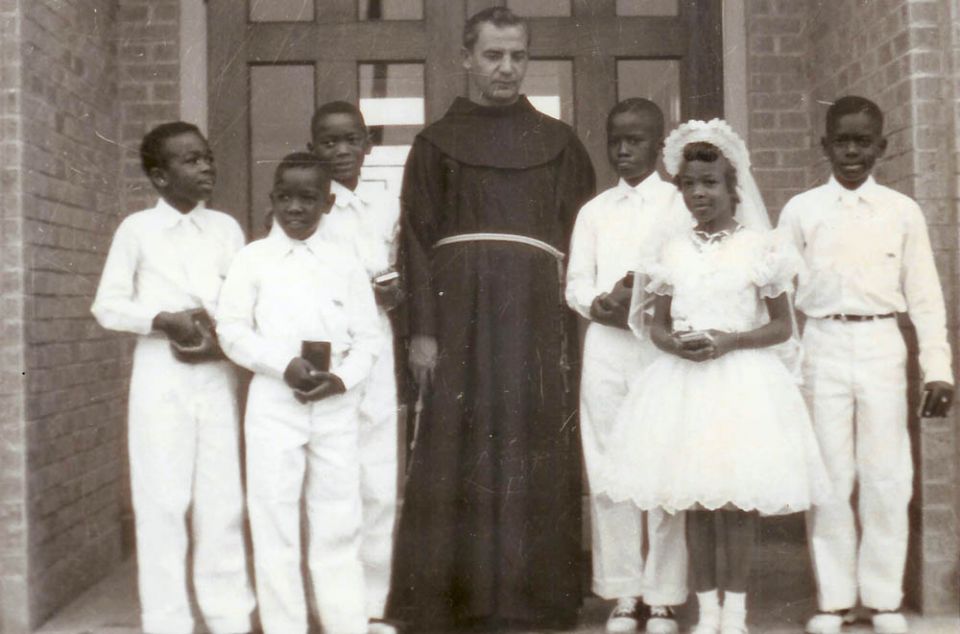 When Martin Luther King Jr. was assassinated April 4, 1968, in Memphis, Tennessee, African-Americans responded with grief and rage. Rioting erupted in more than 125 cities. In Greenwood, Mississippi, however, a white Franciscan friar, Fr. Nathaniel Machesky, helped to channel this righteous anger into constructive action. The Greenwood Movement, which he and two black ministers led, instigated a boycott that won the first tangible gains for African-American citizens of this racially polarized city.

Machesky came to Mississippi to establish a Catholic mission for black residents of Greenwood. He and Franciscan Fr. Bonaventure Bolda purchased the former Blue Moon nightclub on the outskirts of town, and transformed it into a place of worship. On Dec. 16, 1950, they offered the first Mass at St. Francis of Assisi Mission.

The friars next opened St. Francis Elementary School. The laywomen of the Pax Christi Franciscans provided a wide range of services, including a community newspaper, The Center Light, from the St. Francis Information Center in the heart of the black community.

Because Machesky believed that economic self-sufficiency was essential for African-American progress, he organized a co-operative grocery store, credit union, and a business selling silk-screened religious posters and greeting cards.

The friars, teaching sisters, and Pax Christi women sympathized with African-American aspirations and supported the movement's goals, but did not participate in demonstrations. Machesky described his involvement with the movement in a 1980 interview as "very, very low profile. We preached it [racial equality] but did not feel we could demonstrate." His stance mirrored the cautious approach of the Natchez-Jackson Diocese's elderly bishop, Richard Gerow, who supported evangelical and charitable work among African-Americans, but took a dim view of civil rights "agitators." 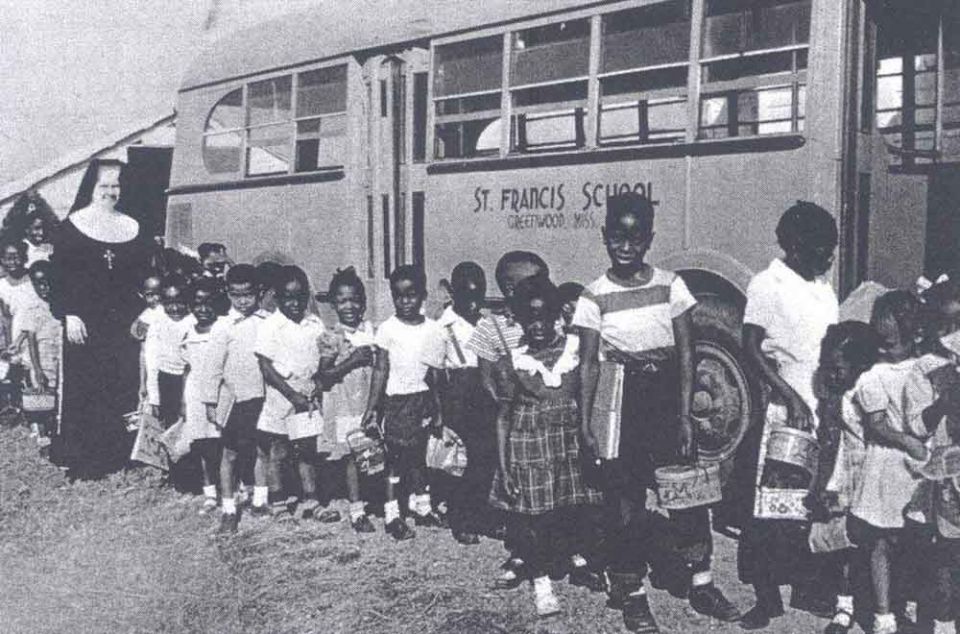 A sister with the first pupils at St. Francis School (Courtesy of Andrew Brophy)

Greenwood's white city administration remained intransigent, and, after five years of civil rights protests, little progress toward racial equality was evident. In the fall of 1967, Machesky tried to persuade Mayor Charles Sampson to grant some African-American demands, but the mayor refused to budge. That's when the friar joined forces with two black pastors, the Rev. Malvin Black and the Rev. William Wallace, to form the Greenwood Movement. The clergymen proclaimed the new movement's simple objectives — respect and jobs for Greenwood's African-American citizens. To achieve these goals, they called for a boycott of white merchants.

The selective buying campaign began Dec. 6, 1967. It met with initial success, but after a few weeks black customers began returning to the stores. Pax Christi member Kathleen Feyen told NCR, "They were doing all right until it got too close to Christmas," then the boycott "sort of died out."

On March 16, 1968, King came to Greenwood to recruit participants for the Poor People's Campaign, an effort by his organization, the Southern Christian Leadership Conference, to pressure the federal government to increase efforts to alleviate poverty. King spoke that evening to an overflow audience at Jennings Temple Church. "There is something wrong with America," he announced. "And we are going all out this time to start getting America straightened out."

Three weeks later, he was murdered in Memphis.

The morning after King's assassination, tearful children at St. Francis School yelled at the sisters, "We hate you. We hate all you white teachers." Irate black students at Threadgill High School poured out onto nearby streets. The Rev. Aaron Johnson, pastor of First Christian Church, intercepted the students and convinced them that marching downtown would be suicidal. Instead, they waited in Jennings Temple while Johnson and Machesky convinced Sampson to issue a parade permit for the next afternoon. On April 6, a crowd estimated between 1,000 and 1,500 marched to the courthouse under the watchful gaze of heavily armed National Guard troops. The Greenwood Commonwealth observed, "Police reported no trouble from the large crowd. The march was termed as very peaceful." In a news photo of leaders gathered on the courthouse steps to memorialize King, the only white face belonged to Machesky.

Speakers urged African-American citizens to steer their frustrations in a positive direction. That meant resumption of the boycott. The murder in Memphis provided the spark that reignited the Greenwood Movement. For the next 20 months, the movement implemented a highly effective boycott that eventually wrested the first concessions from Greenwood's white merchants and political leaders. 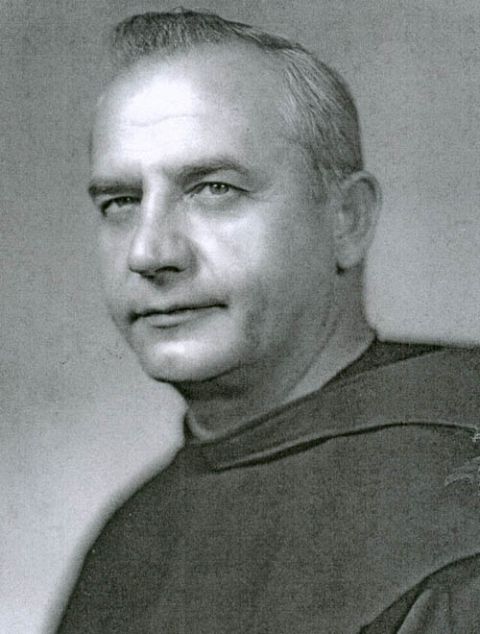 Machesky's leading role in the Greenwood Movement endangered his carefully cultivated connections with the city's whites. The boycott damaged his ties with Lebanese Catholic storeowners who had supported the mission, school and center with donations of merchandise and cash. On a personal level, the priest often had enjoyed the hospitality of white families: He shared drinks and dinner in their homes; golfed with them at the country club; and sat down for evening bridge games.

Catholic businessman Alex Malouf Jr. understood Machesky's dilemma: "He had a decision to make whether he was going to support the blacks or the whites. It wasn't really a choice for him."

The friar's conscience wouldn't let him shirk his duty to his parishioners. He knew their demands were just. What they demanded were the rights all citizens should enjoy.

His advocacy of economic warfare carried real dangers, both for him personally and for the institutions he had built. Greenwood was the birthplace of the Citizens Council that sought to preserve segregation in the wake of the Brown v. Board of Education decision. The city also had an active Ku Klux Klan klavern. Byron de la Beckwith, killer of NAACP leader Medgar Evers, had received a hero's welcome when he returned to his Greenwood home following two inconclusive trials for his role in the murder. (Beckwith was convicted and sentenced to life in prison after a third trial in 1994.)

Machesky's public association with the boycott brought frequent threats and harassment. Nightriders fired into St. Francis Mission, one bullet lodging in the wooden cross above the altar. Machesky's car windows were shot out. Fr. Peter Machesky, also a Franciscan friar, acted as his older brother's bodyguard, sometimes standing vigil outside the church with a loaded rifle while Nathaniel said Mass inside.

White members of Immaculate Heart of Mary Parish petitioned the bishop to stop the friars from saying Mass in their church. Bishop Joseph Brunini, who had succeeded Gerow, responded in a May 7, 1968, letter: "I have already spoken with Machesky expressing my full and complete support of his struggle for the social and economic rights of all people in Greenwood."

The boycott continued without concessions from Greenwood's white power structure. In July 1968, the Jackson Daily News reported, "The merchants here say you could throw a hand grenade down Main Street and nobody would be hit. What they mean is, the Negro-inspired boycott against white merchants had just about sounded a financial knell on retail cash register bells … a white Catholic priest has this town tied up in knots." 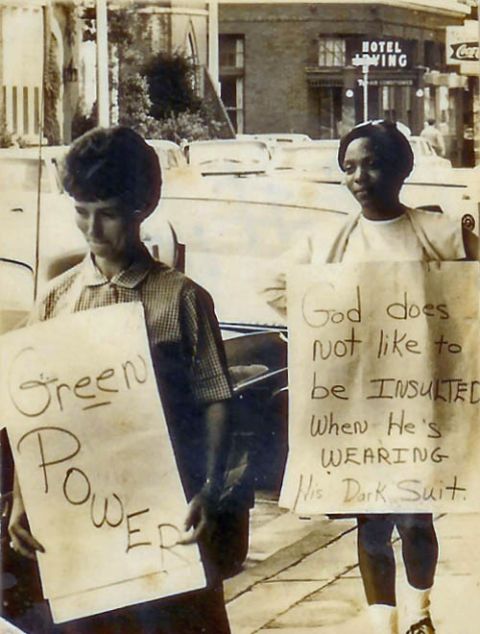 Young people prepare to picket during of boycott Greenwood merchants in 1968. (Courtesy of Andrew Brophy)

The first sign of progress came when Malouf, head of the Retail Merchants Committee, opened negotiations with boycott leaders. "We agreed on a few things and some things we couldn't agree on," he told NCR. One change the storeowners accepted was using courtesy titles to address African-American customers. A second was hiring black sales people and cashiers. However, the businessmen couldn't deliver on a third key demand, hiring African-American police officers.

In the summer of 1969, newly registered African-American voters turned out in force to support moderate mayoral candidate Thurman Henry, whose campaign slogan, "It's Time for a Change," signaled a willingness to abandon Sampson's hardline policies. Henry won with overwhelming totals from black precincts. Six weeks after his inauguration, The Center Light reported the city had hired its first black patrolman. Two weeks later, another black officer joined the force.

While Machesky celebrated the success of the boycott, he suffered personally. The mission and school he founded continued to flourish, but several programs he initiated during the 1960s ceased operating. His rejection by Greenwood's white Catholics was a source of pain. Years later, in an interview with the Greenwood Commonwealth, he recalled, "It hurt. My goodness, I had preached to these people. I heard their confessions, I prayed with them, went to funerals of their loved ones, took part in marriages of their loved ones. It hurt like crazy."

In 1981, Machesky was transferred to Charleston, Mississippi. After a series of strokes he moved to the Franciscan retirement home in Burlington, Wisconsin, where he died of cancer in 1995. St. Francis Church and School stand today as his legacy, still doing God's work in the 21st century. The surviving Pax Christi Franciscans also continue their good works among Mississippi's poor.

[Paul Murray is professor of sociology emeritus at Siena College in Loudonville, New York. His research focuses on Catholic activists in the civil rights movement. He encourages movement veterans to contact him at murray@siena.edu.]