'We have to keep pushing people to be accountable' 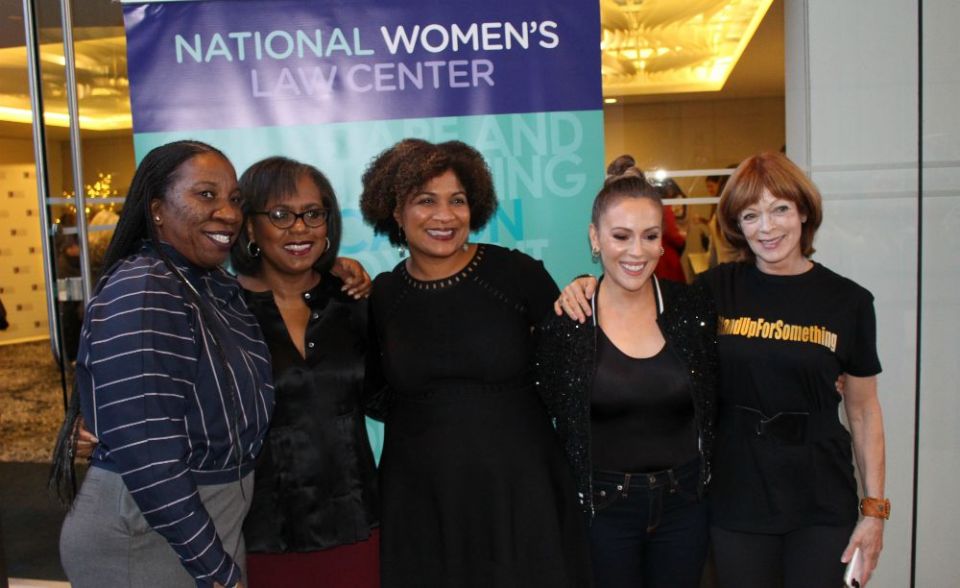 On Friday, Dec. 8, the National Women's Law Center (NWLC) organized an "important conversation to maximize this #MeToo moment to create change" and consider #MeTooWhatsNext. The event took place at the United Talent Agency complex in Beverly Hills, California, and included about 150 "high level professionals in the entertainment industry," according to the center's press release.

Organizers included actors Alyssa Milano and Frances Fisher, producer Jillian Barba and publicist Bonnie Abaunza. Many industry professionals attended, but the space could not accommodate all the people who came. I sat next to Mayor Heidi Harmon of San Luis Obispo and friends who had driven through the fire zone in order to come.

The event began with a recap of the viral spread through social media of the #MeToo movement in October after sexual harassment and sexual assault allegations were leveled against movie mogul Harvey Weinstein. Time magazine named as its 2017 "Person of the Year" the group of women who started speaking out about sexual harassment in the entertainment industry and, by extension, everyone who exposes it in any workplace. The editors call them "the Silence Breakers," people who are "giving voice to open secrets, moving whisper networks onto social networks and pushing us all to stop accepting the unacceptable." Although activist Tarana Burke, who founded the Me Too movement in 2006, was not featured on the magazine's cover, she is included in the article and in the video Time posted to coincide with the naming of Person of the Year. Burke was present at the women's law center event.

The significance and import of Hill's presence and voice in the gathering cannot be overestimated. Since the 1991 Senate Judiciary Commission confirmation hearings for then-Supreme Court nominee Clarence Thomas, when Hill courageously testified about having been sexual harassed by him, there has been a slow gathering of women (and men) who have had enough of sexual assault from all sectors. As Hill remarked Dec. 8, the all-male senators who had grilled her about her experiences did not believe her, and a large percentage of the American public did not either. Today, however, people are telling their stories, and people are listening.

Hill said that all aspects of life, law and institutions need to be tuned in to the reality of sexual harassment and sexual assault. "We have to keep pushing people to be accountable and not let this moment pass without making meaningful change," she said. 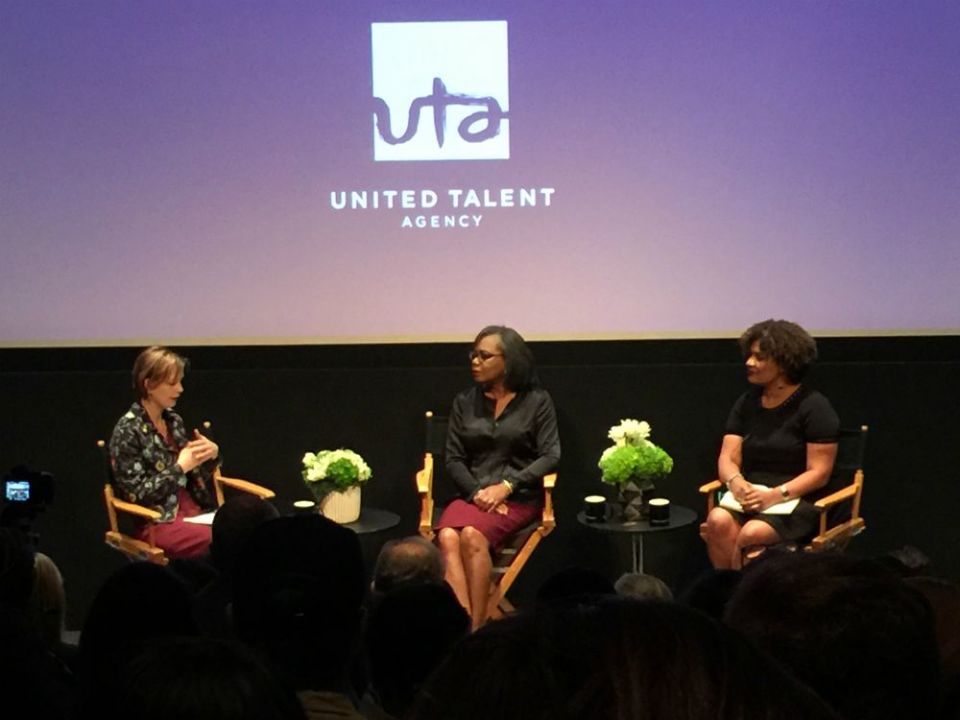 She explained that our laws are not working as they should and we need to ask where the laws and policies fall short. She gave the example of the lowest wage workers being the least protected by existing laws. "Harassment is a secret problem that can be pushed into the shadows by nondisclosure agreements that keep things in the dark. We need to shine a light." Then she asked, "What does accountability look like when a woman isn't famous enough for anyone to pay attention?"

Sexual harassment, sexual assault and rape are part of "the broader situation of where women are in in society, their financial security, women of color, that are all intertwined with women's equality," she said.

When asked, "What are we to do?" Hill responded, "Do it with art, creativity and music. Use these to move forward to improve the world and create positive change around this issue."

Hill spoke about documentary films in particular as "the new investigative journalism" to help people understand the issues. She said that entertainment presents realistic sexual harassment issues but that filmmakers need to show how speaking up can deprive people of the ability to make a living, too. "We need a realistic representation of this," she said.

Hill received a round of applause when she asked the audience, "Who is in control of [entertainment] content? Because we need to make sure it better reflects the reality of situations and our aspirations." This theme was taken up during the Q & A, especially when it comes to the women's uncritical acceptance of rap lyrics "that we are conditioned to accept." Hill recommended a reassessment of the music we listen to. 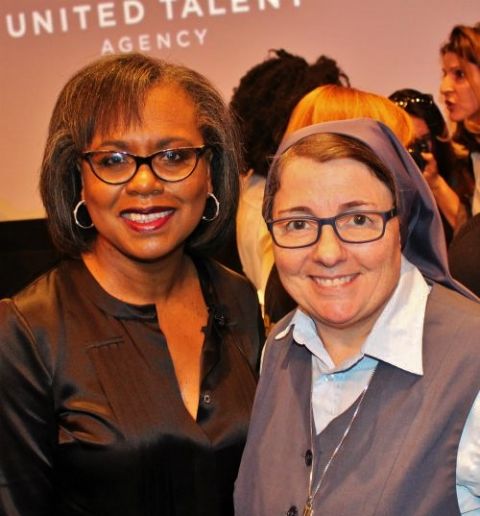 Graves of the women's law center told the audience that if we are not telling stories that include all women, particularly those receiving low wages and women of color, then, "the solutions we come up with won't work."

Hill had several suggestions for a way forward, such as overcoming the credibility gap of a woman's color or status.

"These have nothing to do with her credibility," she said, "but we layer on all these biases when a person comes forward. Look at the stories rather than race, class and physical appearance or we do a disservice to the person and the issue.

"It's important to realize how this eclipses the myth of who is an abuser," she continued. "Not every man is a harasser; nor is a harasser a monster. But it's not just the monsters. We vote people into office and we mourn their loss when they are held accountable. We have to do some deep thinking and soul searching about the myths" of who is a harasser, she said.

The normalization of sexual harassment has become acceptable, Hill noted. "We need to move this issue culturally, psychologically and emotionally. We have to get away from, 'If it wasn't rape, it wasn't that bad.' "

There was an extensive discussion about human resource departments in companies and institutions and how they are often caught between the person making the complaint and the bosses. Retaliation is very real, too. Hill said that the incentive for not retaliating is punishment. If retaliators are not held accountable, they become equivalent to those who do the harassing. Hence, systems and structures must change and they need to change from the top down.

An audience member asked Hill how she felt about the match she lit so long ago. She said, "1991 was a spark. It wasn't just that moment. I've continued to work on these issues. I have the support of my family. I feel fortunate to even be around! But the way I continue, and I don't usually quote refrigerator magnets, comes from one: 'Everything will be all right in the end and if it's not, it's not the end.' I never thought 1991 was the end. Knowing it was not over in 1991 … I could use my voice and keep going to make it here today where it should have been 26 years ago."

Dec. 15, Hill was named chair of a new Hollywood commission to fight sexual harassment in the entertainment industry.

I later spoke with Harmon by phone to ask her what she thought about the Dec. 8 event and how she would implement the conversation in her role as mayor of San Luis Obispo. She said she was thrilled to have been part of the conversation that included Hill, calling her "such a hero, such a challenging and strong character." Harmon said that we need to believe those who come forward, to provide due process, yes, but also to assume they are telling the truth. She is committed to speaking with the city's human resources director and making sure that all city staff members are up to date on what constitutes sexual harassment and assault.

For myself, as the only woman religious present, I reflected on our church and the horrific history of sexual abuse of children and cover ups as well as the efforts to prevent this abuse from ever happening again.

But the overarching impression from the conversation was one of determined women speaking with confidence and hope rather than anger about the culture of harassment that has dominated life in these United States. There was so much positive energy evident among the women and men who participated. As Hill reminded us alluding to the words of Theodore Parker used by Martin Luther King Jr., the voices, the stories that are emerging today are part of "an arc that had been bending toward justice" and we must keep up the momentum for positive change.

Conscience decides if a lawyer can defend someone like Harvey Weinstein