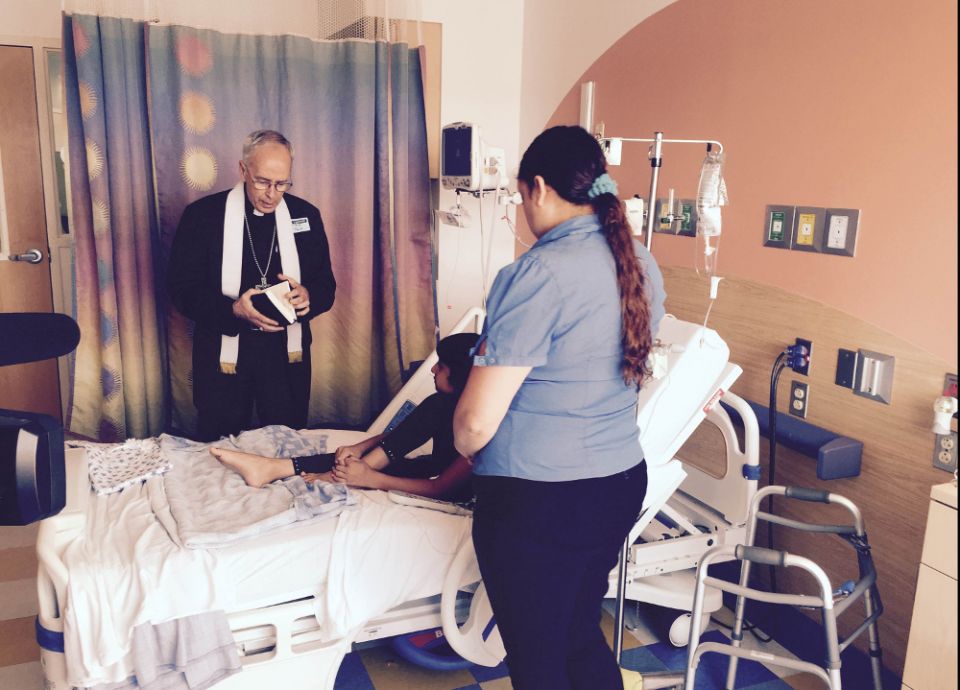 Bishop Mark Seitz of El Paso, Texas, prays with Maria De Loera and her 8-year-old daughter, Alia, Aug. 7. Seitz went to ICE's El Paso headquarters to stand in for Maria and with her attorney ask for her deportation order to be reconsidered. (CNS/courtesy Dylan Corbett, Hope Border Institute)

Washington — After hearing about the plight of a cancer-stricken child whose mother was facing imminent deportation, a U.S. border bishop, Texas Bishop Mark Seitz of El Paso, decided to pay the pair a visit at the hospital.

On Aug. 7, he prayed at a Texas hospital with bed-ridden 8-year-old Alia Escobedo, suffering from bone cancer, and her mother Maria De Loera, the child's only caretaker, before heading to a meeting with immigration officials -- a hearing in which the mother was to report for deportation but one which the bishop attended in her place.

"I was informed about the situation over the weekend, I'd heard rumblings," said Seitz in an Aug. 7 phone interview with Catholic News Service. "As a parish priest, one of the most rewarding ministries was through the sick. I always felt close to children who were sick."

At the hospital, he said, he read Scriptures with the mother and daughter, who are Catholic, and prayed. He said he tried to reassure the mother that there were a lot of people trying to help.

"It was a pleasure to be able to meet them and hopefully bring a bit of a consolation to this young child," he said. "They're amazingly resilient. This mom had her husband killed in (Ciudad) Juarez, escaped to El Paso running for her life. When she came here, her youngest daughter was diagnosed with bone cancer."

The last two and half years have been filled, not just with treatments at the hospital, but also with the threat of deportation. An asylum request De Loera filed in 2014 was denied the following year, and since then, she has been in the process of being removed from the country by immigration officials.

Seitz, along with other clergy, accompanied De Loera's lawyer to see officials from U.S. Immigration and Customs Enforcement, also known as ICE, "to reconsider … given the circumstances," he said.

He said he met with a case worker and a supervisor as well as other officials.

"I think they were relatively receptive," he said.

On Aug. 8, ICE officials granted De Loera a six-month stay to continue watching over her daughter during treatment, said Dylan Corbett, executive director of the Hope Border Institute, which also has been involved calling in attention to the case. At her daughter's bedside, De Loera wears an ICE-issued ankle monitor to track her location even though she has not committed a crime and arrived seeking asylum, Corbett said.

"Maria and Alia are the human face of a broken immigration system and militarized border enforcement," said the Hope Border Institute in an email statement. "They're the reason we're fighting for reform and a more human border."

"I'm concerned about the very fact that we had to intercede on behalf of this mother under these circumstances," Seitz said to CNS, because it shows that "even the most obvious humanitarian reasons for allowing a person to stay are no longer sufficient."

Seitz made headlines in July because of a pastoral letter in which he denounced the "demonization of immigrants" and pleaded with others for compassion and solidarity. He said he's aware that even among Catholics, the issue of immigration can spark disagreement.

"I just ask them to bring these issues to their prayer," he said. "And also, to get to know a recent immigrant and, especially, to get to know one who fled here without the opportunity to arrange documents because they were fleeing for their lives, before deciding what the proper resolution of these cases should be." 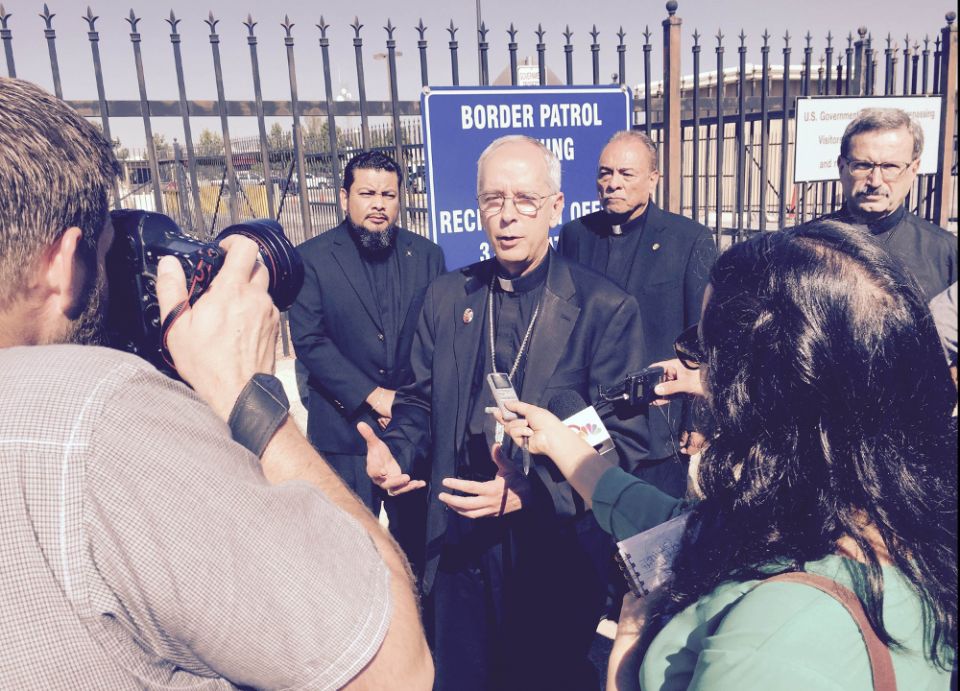 Bishop Mark Seitz of El Paso, Texas, speaks to reporters before attending an Aug. 7 meeting with immigration officials to try to stop the imminent deportation of Maria De Loera, whose 8-year-daughter is in a Texas hospital being treated for bone cancer. (CNS/courtesy Dylan Corbett, Hope Border Institute)

Jesus, he said, spoke to questions of law and recognized that there is the law of God and human laws, and human laws can be good or they can be bad.

"Bad laws need to be changed and sometimes bad laws cannot be followed," he said. "One example is the law that permits abortion. Just because the law says it's OK, it does not make it OK."

He also asked others to think about the circumstances that lead others to flee their native countries.