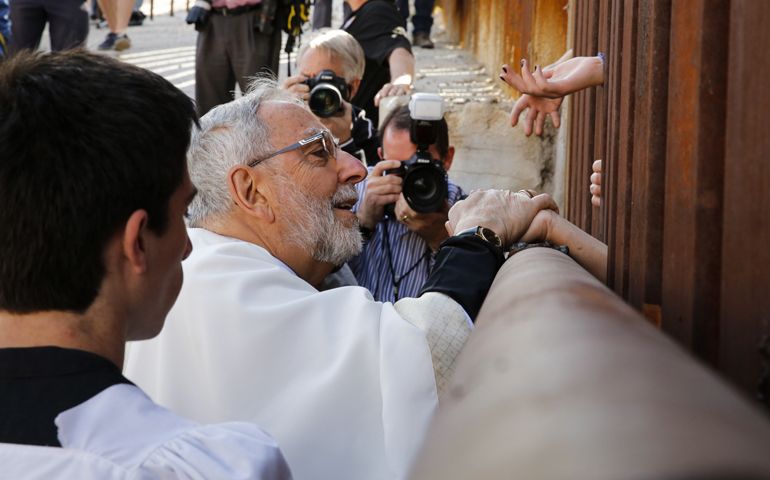 Bishop Gerald Kicanas of Tucson, Ariz., blesses people on the Mexican side of the border as he distributes Communion through the border fence Tuesday in Nogales, Ariz. (CNS/Nancy Wiechec)

Nogales, Ariz. — With the backdrop a few feet away of the rusted iron slats of the 30-foot wall along the U.S.-Mexico border, Boston Cardinal Sean O'Malley and a dozen other bishops from three countries prayed April 1 for compassion and for a return to ideals that welcome immigrants.

More than 300 people formed the outdoor congregation on the U.S. side of the border and hundreds more participated on the Mexico side, receiving Communion pressed into hands that stretched between the slats, illustrating that, as one teenage member of the choir put it, "we are all one community -- we are all bilingual and bicultural."

Referring to a visit by Pope Francis last summer to the Italian island of Lampedusa where migrants from the Middle East and Africa try to enter Europe illegally, O'Malley in his homily quoted the pope's comments about the "globalization of indifference."

"We have lost a sense of responsibility for our brothers and sisters," Pope Francis said. "We have fallen into the hypocrisy of the priest and the Levite whom Jesus described in the parable of the good Samaritan."

O'Malley quoted Pope Francis further: "The culture of comfort, which makes us think only of ourselves, makes us insensitive to the cries of other people."

The Mass at the intersection of International Street and Nelson capped a two-day experience of the border region for bishops from as far away as Atlanta and Guatemala. Beginning with a Mass the day before at San Xavier del Bac Mission outside Tucson, which dates from when the entire region was part of Mexico, the bishops then walked along rough desert paths used by migrants.

Crawling under strands of barbed wire, scrunching low to walk through a culvert beneath a road, dodging cactus and sticker bushes, the group came upon empty water bottles, backpacks and other belongings abandoned by the migrants who cross the hilly, rocky terrain as they try to get past the various security measures and agents used by the Border Patrol to try to stop illegal immigration.

Then the group met with the Border Patrol at their regional headquarters, before crossing into Mexico to serve dinner at a church-sponsored "comedor," or soup kitchen. The "comedor" serves people who have been deported or who are figuring out whether they want to try to sneak into the United States.

"We come to the desert today because it is the road to Jericho," said O'Malley in his homily. "It is traveled by many trying to reach the metropolis of Jerusalem. We come here today to be a neighbor and to find a neighbor in each of the suffering people who risk their lives and at times lose their lives in the desert.

"The hard work and sacrifices of so many immigrant peoples is the secret of the success of this country. Despite the xenophobic ranting of a segment of the population, our immigrant population contributes mightily to the economy and well-being of the United States."

He added that the group came also to mourn the loss of "countless immigrants who risk their lives at the hands of the 'coyotes' (smugglers) and the forces of nature to come to the United States."

The Mass, which was shown live on the Internet and remains available for viewing on YouTube, was organized by the Jesuits' Kino Border Initiative and Migration and Refugee Services of the U.S. Conference of Catholic Bishops.

The diocese of Tucson and the archdiocese of Hermosillo, Mexico, worked closely together in arranging the details. Tucson Bishop Gerald Kicanas and Hermosillo Archbishop Ulises Macias Salcedo were among the concelebrants.

A choir from Lourdes Catholic High School in Nogales and members of Knights of Columbus councils from across southern Arizona were among the many volunteers. One of the more unusual roles the volunteers filled was ensuring that nothing other than the Eucharist or hands were passed through the slats of the border fence, part of a complex negotiation with the Border Patrol to allow the Mass to take place within the agency's jurisdiction. Throughout the Mass a dozen or more Border Patrol agents watched the proceedings from just outside a pedestrian port of entry a block west of the altar.

Dick Goddard, a Knight from St. Pius X Parish in Tucson, was among the volunteer ushers. He said he'd only learned about the Mass a day earlier but thought it important to attend. He had made the hourlong drive to the border with three fellow parishioners.

"They say we have a broken immigration system," Goddard said. "Obviously we do. Human rights and dignity have gotten lost in the whole thing. We've got to do something to get attention to that."

Many of the congregants on the Mexican side came to the Mass after having met the bishops and others in the delegation during their visit to the "comedor" the previous day.

Fr. Clete Kiley, a Chicago archdiocesan priest who works as director for immigration policy for the labor union UNITE HERE, said two of the young men he chatted with over dinner Monday caught his eye, smiling broadly through the fence slats as the priests and bishops assembled at the altar on a large stage brought in for the occasion.

O'Malley's homily, delivered largely in Spanish, was met with applause at several points, such as when he talked about how today's migrants, whether they come with or without government permission, hold the same kind of values that brought earlier generations of immigrants.

"Our country has been the beneficiary of so many immigrant groups that had the courage and the fortitude to come to America. They came fleeing horrific conditions and harboring a dream of a better life for the children," he said.

"They were some of the most industrious, ambitious and enterprising citizens of their own countries and brought enormous energy and good will to their new homeland. Their hard work and sacrifices have made this country great," he added.

After Communion, a procession of bishops climbed the Border Patrol access road alongside the fence. Partway up the steep hill, O'Malley placed two wreaths alongside a cross to commemorate those who have died along the border, including "ranchers, farmers, peacekeepers and travelers who seek a common ground of peace and prosperity," as the Mass program described the memorial.

Another Mass was held simultaneously at the border between the cities of San Luis, Mexico, and San Luis, Ariz., at the southwestern tip of the state.

Cross-border religious events to bring attention to immigration-related issues have been sponsored by dioceses in the U.S. and Mexico for years. Among them are annual processions for the Way of the Cross during Lent and Las Posadas, the Christmas season re-enactment of the search for lodging by Mary and Joseph in Bethlehem, as well as occasional Masses at the border.

The Mass Tuesday had perhaps the greatest number of bishops participating, as well as priests from throughout the region and across the country.

Flores brought a letter of greetings and support from the Guatemalan bishops' conference, in recognition of the many Guatemalans who pass through Mexico and Arizona on their way north.