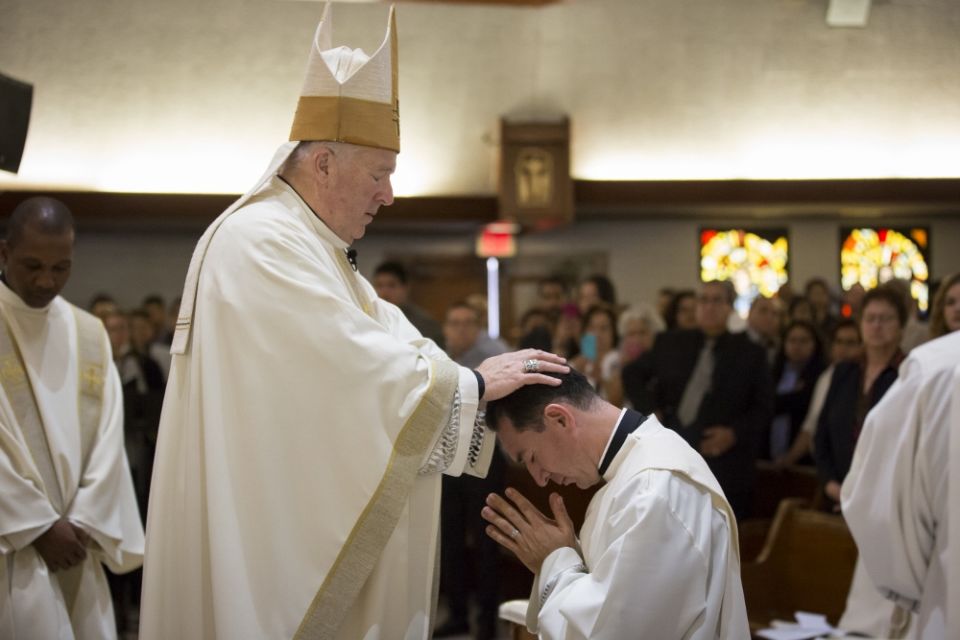 San Ysidro, Calif. — On June 9, as Jesuits around the country celebrated the ordinations of 21 new priests, those from the West undertook the radical step of holding their ordinations not at a Jesuit institution, but in a small diocesan parish just 1 mile from the U.S.-Mexican border.

At this moment when the treatment of immigrants in the United States worsens by the day, with Immigration and Customs Enforcement seeming to go out of its way to hunt down, deport and terrorize anyone whose papers may not be in order, such a move has obvious political implications. But for those involved, the choice was not about polemics but the humble, welcoming reality of the kingdom of God.

It began with a simple request. Three of the five men to be ordained for the Jesuits' West Province were immigrants to the United States; the other two had worked with immigrants at the border. Jesuit ordinand Elías Puentes wondered if the ordaining bishop could be someone who could speak to the immigrant experience.

For Jesuit Fr. Scott Santarosa, who in July 2017 was put in charge of the newly combined Oregon and California provinces, Puentes' question seemed like an opportunity.

"Given our new province borders Mexico, why don't we do it closer to that immigrant experience?" Santarosa said.

The complexities ordinand Roberto Carlos Durán faced in renewing his visa, which led to him eventually having to return to El Salvador to be ordained, further confirmed the value of such a move to Santarosa.

"It’s not like he’s struggling to come across the border. He’s in the country," Santarosa pointed out. "But even so, he’s not at all in a necessarily secure place. So all the more reason for us to go to a place that symbolizes the precarity of immigrants in this country." (Durán was ordained March 23 at the Metropolitan Cathedral of San Salvador in the crypt of Blessed Archbishop Óscar Romero.)

A call to San Diego Bishop Robert McElroy led to the idea of celebrating the ordinations at Our Lady of Mount Carmel in San Ysidro. Ultimately, on June 9, Puentes, J.T. Tanner, Alejandro Báez and Thomas Flowers were ordained at Mount Carmel, a parish not only physically close to the border but with an extraordinary view of Tijuana, Mexico.

Much like their diocesan counterparts, Jesuit ordinations are usually occasions of great spectacle, incense rising to soaring ceilings, the rich harmonies of large choirs echoing off rafters. They're moments that celebrate the humble self-offerings of good men to a church that feels ancient and transcendent.

Our Lady of Mount Carmel is not a church like that. One story high, octagonal in shape, it's maybe 15 steps from the back of the church to the front. There is no choir loft here, no soaring rafters or majestic vistas. Rather than a wonder witnessed from afar, liturgical celebrations here feel like they take place in a family home. Everything is intimate and close. 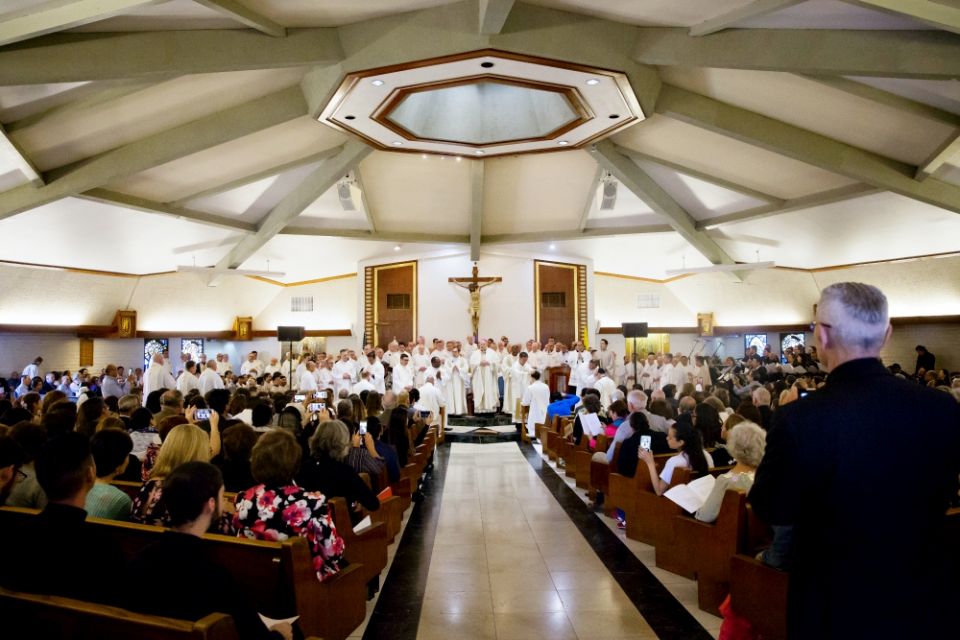 The ordination Mass for the Jesuits' West Province is celebrated June 9 at Our Lady of Mount Carmel Parish in San Ysidro, California. (Jon Rou)

As small as the church seems, its mostly Spanish-speaking community is large, with 800 to 900 people attending each of its eight weekend Masses, according to longtime Deacon José Luis Medina.

Parishioners come from both sides of the border, and include members of U.S. Border Patrol and local police. The spirit of the 91-year-old parish, says Medina, is one of welcome. "This parish is like a house for everybody," he said.

That's a message that resonates strongly with the newly ordained Puentes, 46, who came to Los Angeles from a village in Mexico as a teenager. Throughout his youth, his parents traveled across the border regularly, earning money in the U.S. and then returning to Mexico to raise him and his three older siblings. "Eventually, my mom got tired of the back-and-forth, and one day she said we're all going over," he said.

In the U.S., his family initially had no papers, but their experience was vastly different from what people go through today.

"Back then, it was OK to be undocumented," he said. "You were not ashamed of it. Now there's this stigma; you don't ask people. Before you could ask, and it was kind of normal."

Puentes is concerned about the impact of federal policy on both immigrants and everyone else.

"When I am in an airport, not in Los Angeles but somewhere like Nashville, Tennessee, I'm really aware that I'm not an American-born person, that I'm an immigrant," he said. "I was visiting my mom, and along the highway you see the border patrols hiding, pulling someone over. If you're undocumented, or an immigrant, it creates a sense of repression." 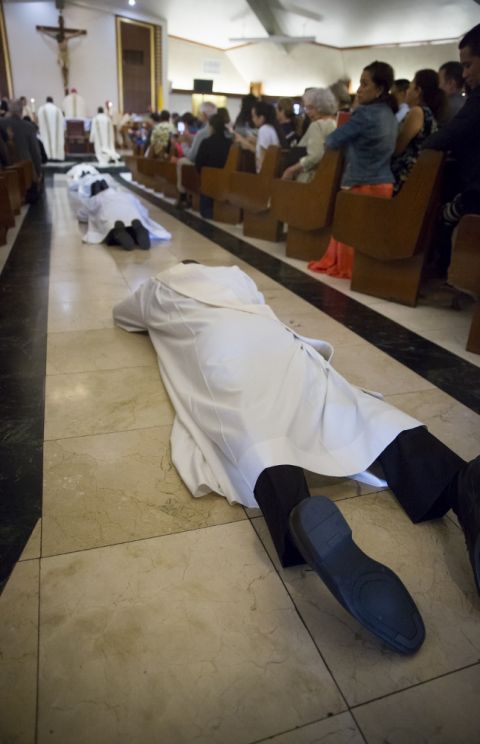 Ordinands lie prostrate as the community prays for the blessing of the Holy Spirit to descend upon them at their ordination. (Jon Rou)

"That kind of division and prejudice," he said, is something "we all carry anyway. But this wave of demonizing immigrants has enhanced that. And how long will it take us to heal from that?"

For Puentes, having the ordination at the border was an opportunity for the Society of Jesus to share in the immigrant experience. "Being an immigrant, you go away, and then you rely upon the generosity of people welcoming you. You're not home," he said.

The blessing of Mount Carmel, he added, "is that it's not ours. We're being welcomed into it."

In the Jesuits, he said, "we have so many communities that are exclusive," i.e., more affluent. "When I took my vows at Loyola Marymount University, my family was like 'Oh my God, it's so beautiful here.' "

At Mount Carmel, he knows they're not going to say that. "It's just home," he said.

Fellow newly ordained Jesuit priest Tanner, 36, has a similar understanding. He remembers growing up in Thousand Oaks, California, and the way white people spoke about "that part of town" where many of the community's Mexican immigrants lived.

"Then as you get older, the kids who lived in 'that part of town,' they were in class with us, they ran track with us," he said. "Then all of a sudden you're working alongside them, they're your best friends."

Tanner studied theology in Colombia, and spent a year working at the Kino Border Initiative, which works with migrants on both sides of the border.

"You hear the stories of parents who just want to get back to their kids, they work for two or three years to save up money, spent it on the traffickers, the coyotes to cross, and then it didn't work out," he said. "So all of that two or three years of money, gone. And then they do it all over again. They may try two, three, four or five times."

He finds the typical American's ideas about undocumented immigrants wholly inadequate to what he's seen.

"Women who sell themselves to get the money, respectful, God-loving people that would do anything to cross over — people don't do that kind of stuff just because they 'want a better life,' this narrative that we repeat over and over again. They do it for way more desperate reasons."

For him, the idea of celebrating the ordination at an ordinary parish near the border was about embracing the reality of the church today.

"There's something really beautiful when we have our ordination in those big places," he said, "but in a certain way it's creating our own image of what we think the church is, or what it was."

"Going into the church should be an experience of seeing what the world is, in all of its suffering and all of its beauty. I'd like to think that's what we're doing."

"Is this border a bridge or a barrier we see before us?" McElroy asked the 1,000-plus people within and outside the church in a homily filled with both poetry and challenge.

The journeys of immigrants, he said, have been "the seedbeds of our nation's accomplishments and destiny. And the present-day denial of those journeys is our nation's shame."

The border "pulsates with dreams and hopes and suffering, and seeks the grace of God," he said.

To be church, he said, is to refuse to accept the validity of any barriers put between us.

"In the words of the prophet [Isaiah]," he said, "God is revealing that those who have been outcast in the eyes of the world, and so often in the eyes of the church, must now be embraced. The exclusion that is so deeply and sinfully rooted in the human heart must be replaced by a radical sense of inclusion which makes every woman and man truly welcome."

The mission of the church and of its new priests, the bishop said, is to follow the call of Pope Francis "to see with new eyes, and to build bridges where there have only been barriers before." 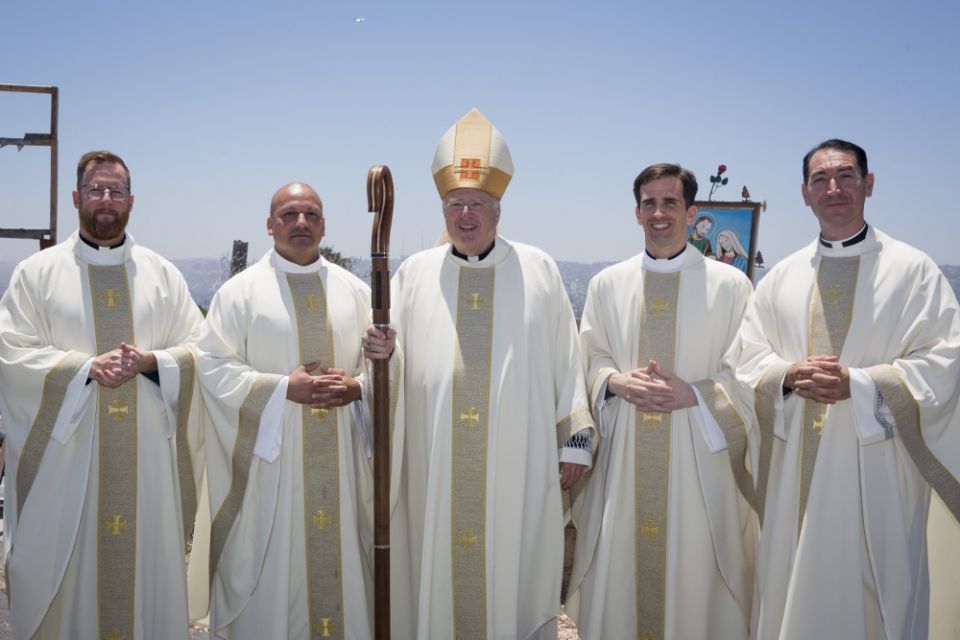 The morning before the ordination, the children of Mount Carmel's parish school held their end-of-year Mass. It was also the feast of the Sacred Heart, and so the students sat wearing dark blue sweaters and bright white shirts listening as one of their peers read a prayer to the Sacred Heart.

What does the prayer mean, pastor Fr. Jose Castillo asked the reader, a seventh-grade student.

"It means that Jesus really has a Sacred Heart, like us," the boy replied. "That this is proof, that he loves us."

Amid the congregation of the ordination, the feeling was much the same.

"We've never seen anything like that," said parishioner Angel Carrara.

Parish youth coordinators Gabriela and Tony Medina agreed. "To see them all together here, these people you look to when you need something, it was just beautiful," Gabriela Medina said.

"Everything was so joyful," Tony Medina said. "We've been waiting for months; to be a part of it, to let us put our little seed in there and help, that was our blessing."

As the mariachis played and the gathered community stood in the parish plaza celebrating its new priests, the morning fog lifted off the nearby mountains and the city of Tijuana emerged. It's so near to Mount Carmel you can see the sunlight flash off windshields and the sprawl of buildings indistinguishable from our own.

Yet it's also just far enough away to keep drawing your eye. At this distance, Mexico is not a political issue or even another country, but a thing of beauty, a world worthy of attention and imagination. Rather than problem or barrier, on this beautiful morning what is abundantly clear is the sense of invitation.

[Jesuit Fr. Jim McDermott is a screenwriter and journalist working in Los Angeles. He works as the West Coast correspondent for America magazine and was most recently on the writing staff of the AMC TV show "Preacher."]

Arizona mother deported from U.S. taken in by shelter just across border