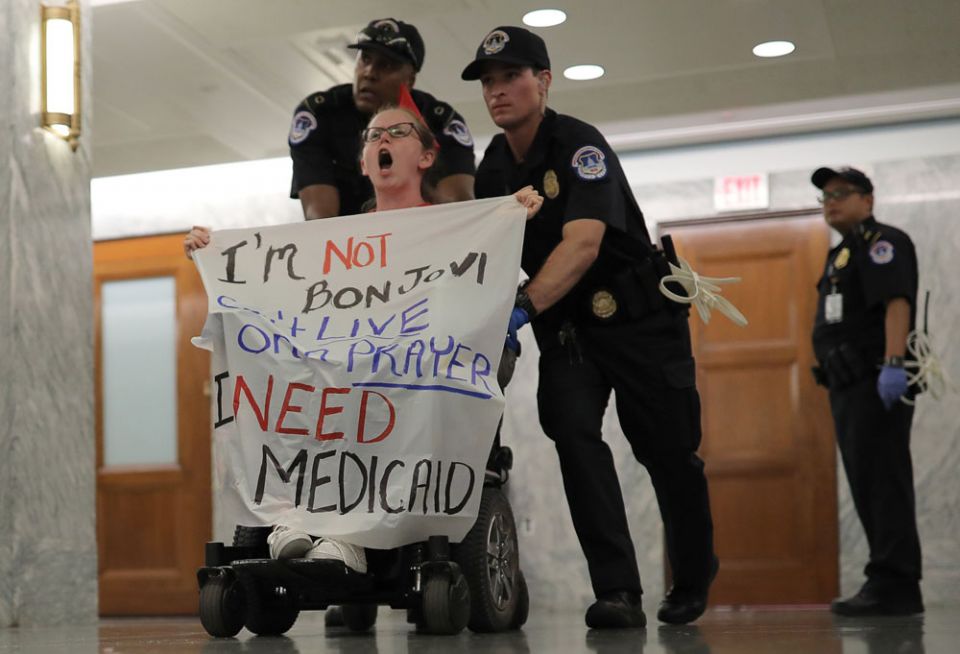 — A protester is led away by U.S. Capitol police officers in Washington Sept. 25 outside a Senate Finance Committee hearing on Capitol Hill about the latest Republican effort to repeal and replace the Affordable Care Act. (CNS/Carlos Barria, Reuters)

Catholic activists, health care leaders and other religious advocates who fought to oppose the latest attempt to repeal the Patient Protection and Affordable Care Act are hoping members of Congress will return to bipartisan work on improvements to the health care law, which were halted with the introduction of the now-failed Graham-Cassidy bill.

Senate Republicans announced Sept. 26 that they would not move ahead with a vote on Graham-Cassidy, named for Republican Sens. Lindsey Graham of South Carolina and Bill Cassidy of Louisiana. Studies said the proposal would result in millions of Americans losing healthcare insurance.

"Hopefully this hasn't created so much animosity that they can't pick [the bipartisan work] up again," Social Service Sr. Simone Campbell, executive director of NETWORK, a Catholic social justice lobbying organization, said Tuesday morning, before the cancellation of the vote on Graham-Cassidy.

Catholic organizations that had opposed the bill had also urged members of Congress to work together to improve the Affordable Care Act.

"It was a tremendous relief that Congress was working in an open, bipartisan way to improve our healthcare system," including those to reauthorize the Children's Health Insurance Program, said a letter signed by 3,000 religious leaders from the Interfaith Healthcare Coalition that urged legislators to oppose Graham-Cassidy. The signers of the letter included more than 2,500 Catholics — of which more than 1,700 were Catholic sisters.

The signers of the Sept. 25 letter from the Interfaith Healthcare Coalition said they hoped such bipartisan work would continue. They also reaffirmed health care as "an essential human right."

"We believe that individuals and families should not have to worry about the future of their healthcare coverage and whether or not it will be ripped away," the letter said.

One study estimates the Graham-Cassidy bill would have left 32 million more Americans without health insurance by 2027, while the Congressional Budget Office said "millions" would have lost comprehensive health insurance in the bill's effort to reduce the on-budget deficit by $133 billion over that time.

On Sept. 25, Catholic activists prayed outside the Senate Finance Committee meeting, where the bill was being discussed, then delivered to senators.

Other Catholic organizations, including the Catholic Health Association and the U.S. bishops' conference, have also spoken out against the Graham-Cassidy proposal, which would repeal the Affordable Care Act and replace it with block grants to the states that would shrink over time and disappear altogether by 2027. It also would eliminate the Affordable Care Act's Medicaid expansion coverage and cap the federal government's contribution to Medicaid, shifting responsibility to the states or patients themselves.

The Catholic Health Association, which represents 2,000 Catholic health care systems, hospitals and long-term care facilities, noted that Graham-Cassidy block grants to states would provide $95 billion less than under current law from 2020 to 2026, after which the grants end. The loss of funding to states in 2027 alone is over $231 billion, according to the Catholic Health Association.

"While the ACA is not a perfect law, and should be improved where necessary, no attempt to do so should leave behind millions of people who have obtained meaningful, affordable insurance that was not possible before the ACA," said Daughter of Charity Sr. Carol Keehan, Catholic Health Association president and CEO, in a Sept. 19 letter to U.S. senators.

Keehan urged senators to reject the bill and instead "focus on bipartisan reform efforts to strengthen and expand the health insurance coverage gains already achieved, and improve the stability and affordability of the insurance market."

Catholic Charities, the church's social service arm, also decried the proposed Medicaid cuts, which would affect those they serve. More than 860,000 clients receive health care-related services from Catholic Charities agencies across the country.

Markham noted that the reform bill "makes efforts to better protect life," but ultimately "rolls back gains in health care for the poor and vulnerable."

A letter from the chairmen of four U.S. bishops' committees also found "praiseworthy" that Graham-Cassidy would redirect funds from organizations that provide abortion, but the bishops' Sept. 22 letter criticized much of the rest of the bill.

"Our nation must not attempt to address its fiscal concerns by placing an insufferable health care burden on the backs of the poor," the bishops wrote. "Decisions about the health of our citizens—a concern fundamental to each of us—should not be made in haste simply because an artificial deadline looms."

The American Hospital Association and many individual hospitals also opposed the bill, including the Catholic Trinity Health, based in Michigan. Graham-Cassidy would "tie our hands" in carrying out clinicians' oath to "do no harm," said Trinity CEO Richard Gilfillan in a Sept. 23 statement.

"Those who are battling disease should not have to battle Congress, too," Gilfillan wrote. "That's why we clinicians have the obligation to speak up and represent those who are not being heard — the vulnerable individuals and families who desperately need these protections."

He added: "As clinicians, and as a country that cares for our people, we have only one choice: Do no harm."

ACA’s popularity grows, even as GOP lauds change to requirement to have coverage