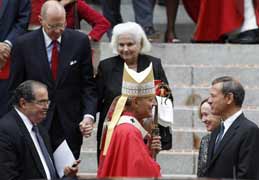 Archbishop Donald W. Wuerl of Washington and Chief Justice John Roberts, and his wife, Jane, talk after leaving the Cathedral of St. Matthew the Apostle in Washington following the Red Mass Oct. 2. Also pictured are Justices Antonin Scalia, bottom left, Anthony M. Kennedy and his wife, Mary Davis. The Mass traditionally marks the start of the court year, including the opening of the Supreme Court term. (CNS photo/Bob Roller)

Judging by many Catholic public officials' record on capital punishment, you would think that Catholicism has no problem with injecting lethal chemicals into the veins of human beings. Just last week Supreme Court Justice Antonin Scalia erroneously claimed current Catholic teaching does not view the death penalty as "immoral."

I wonder how many of the faithful at this Sunday's Red Mass at the Cathedral of St. Matthew the Apostle in Washington, D.C. agree. The Mass, celebrated by Archbishop Donald Wuerl, is often attended by political luminaries such as Scalia.

In my home state of Pennsylvania, Governor Tom Corbett, who is a Republican and a Roman Catholic, has already signed eight death warrants since taking office in January 2011. Corbett has said "the pro-life movement has to keep reminding everyone that these are living human beings." His opposition to abortion is commendable. But, he is also on record as saying that as a district attorney he has "convinced a jury to seek the death penalty" and that he would never support a moratorium on capital punishment. Among the 50 states, Pennsylvania now has the fourth highest number of inmates on death row -- 219 -- more than twice that of Georgia.

Many Democrats are not much different on this issue. For example, Pennsylvania U.S. Senator Robert Casey Jr. is a Roman Catholic. He deserves credit for co-sponsoring the Pregnant Women Support Act, which aims to reduce the number of abortions in the U.S. by 95% over ten years. But he too believes that death is an appropriate "punishment" for "the most heinous crimes."

The list could go on, from both sides of the aisle.

The problem is this position squarely violates Catholic teaching against the death penalty. Last week, more than 300 Catholic theologians, scholars, and social justice advocates issued "A Catholic Call to Abolish the Death Penalty." The signatories acknowledge that justice must always be served. But they maintain, as Blessed Pope John Paul II did, that "the dignity of human life must never be taken away, even in the case of someone who has done great evil."

The death penalty is "cruel and unnecessary" and must be abolished, the pontiff declared. He recognized, as do many criminal justice experts and most nations, capital punishment is not necessary in modern society because prisoners can be kept safely in penal facilities. Thus, state-sanctioned killing of criminals is no longer justifiable.

Catholicism does not accept retribution as a reason for execution.

Nonetheless, many Catholics hang their pro-capital punishment arguments on a perceived loophole in the teaching. The Catechism of the Catholic Church permits the execution of criminals, albeit in "very rare if practically non-existent" circumstances. However, supporting capital punishment based on this caveat is untenable for two reasons.

First, the church does not ever allow for "capital punishment," both in theory and practice. Even on the level of principles, it only allows for "legitimate defense." Thus, the Catechism (#2263-7) discusses cases where it may be necessary to defend the public against an unjust aggressor in a section titled "Respect for Human Life." There the Catechism does not even use the phrase capital punishment because it forbids lethal punishment. It only permits legitimate defense against an unjust aggressor as a last resort, i.e. when no other means exist. E. Christian Brugger explains this current teaching in much greater detail in his careful scholarly work on the subject.

Clearly, as John Paul II and the United States Conference of Catholic Bishops have argued, other means of deterring an unjust aggressor exist in the contemporary United States. Research has shown that the death penalty is not even necessary to prevent murderers from killing again. Thus, execution may not be used as a legitimate defense.

There, are of course, many other important reasons the church rejects capital punishment. "A Catholic Call to Abolish the Death Penalty" raises many of them. But the issue for pro-capital punishment Catholics boils down to this simple question: Can anyone seriously argue that the only means of defending society against further harm from Troy Davis, or Lawrence Brewer for that matter, was to kill them? In other words, they would have to be considered unjust aggressors who posed a threat to society up to and at the moment of their execution. That's the argument Justice Scalia needs to make in order to maintain, with a clear conscience, that the death penalty is not immoral.

It looks like he -- and other pro-death penalty Catholic political leaders -- need to reconsider their positions.

Understandably, the church's teaching against capital punishment is not always easy to assimilate, especially for those who have been harmed or lost a loved one in a violent crime. But we have a witness of the possibility for forgiveness and need for restorative justice in Blessed John Paul II. After recovering from the assassination attempt on his life, he not only forgave the man who almost killed him, he also befriended him and his family. Groups like Murder Victims' Families for Human Rights have also powerfully testified to the demands and promise of the Gospel while advocating for the abolition of the death penalty. May our nation's Catholic leaders draw insight and inspiration from these disciples of Christ.

[Gerald J. Beyer is Associate Professor of Christian Social Ethics at Saint Joseph's University in Philadelphia. PA. He is one of four co-authors who recently wrote "A Catholic Call to Abolish the Death Penalty"]