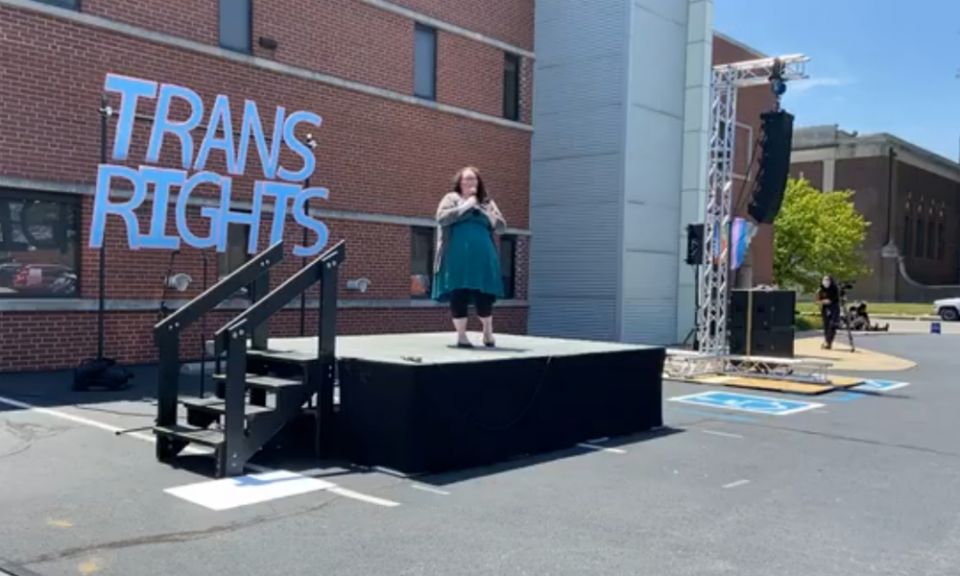 When Indianapolis Catholics gathered at a July 11 rally to protest the policies of the city's archbishop toward transgender students, they relied on the words of another archbishop to open them in prayer.

Those words were offered by Archbishop Wilton Gregory of Washington, D.C., to a confirmed transgender Catholic at a Theology on Tap in August 2019. At the protest, they were meant to serve as a contrast to Archbishop Charles Thompson's policy issued last month that warned that transgender students may not be allowed to enroll in its Catholic schools.

Since the policy was made public, Catholics in the archdiocese have taken to local papers and to the streets in protest of the policy, which they have labeled as "unspeakably cruel."

The July 11 "Rally for Equality Caravan" attracted more than 100 vehicles, which parked across from Indianapolis' Catholic Center for a socially distant gathering. Participants remained in their cars while a mix of former Catholic school teachers and area advocates spoke on a nearby stage and called for Thompson to roll back the newly implemented policies that they argue fail to treat LGBT individuals with respect and compassion.

Meli Barber, vice president of DignityUSA, who opened the event recalling the words from Gregory, told the attendees that she is "confident that this policy does not represent the heart of God, the heart of a God who loved us, all of us, into existence."

Barber is the former director of religious education for the Indianapolis Archdiocese and left her post several years ago to marry her now wife. The rally was organized by DignityUSA and a range of area allied organizations.

Following the rally, Barber told NCR, "Being in Indiana, you don't always feel the support of the LGBTQ community, but people really showed up to support our students, to support our community. I was really proud of Indianapolis for that."

She said that, as an area Catholic, she was not surprised, but was disappointed with the archdiocese's policy, but she vowed that her faith remained strong.

One of those Catholics is Buffy Hoyt VanWienen, who taught at area Catholic schools for nearly 20 years before leaving last year in protest of the archdiocese's decision to fire a fellow teacher who had entered into a gay marriage.

Hoyt VanWienen, who has a transgender niece, said at the rally that the policy runs counter to the values of the church and the school system that she had taught in for so long.

"My niece is a beautiful young lady," she told the attendees. "It has been decided that she is not worth the same in the eyes of God."

Given the outdoor setting, her words were met with honking car horns instead of applause as she spoke directly to her fellow educators. "Do you want to make that future one of hope or silence?" she asked. "Remind your students that you love them unconditionally."

"All of them," she added. "Please create a space where they know they are loved and accepted."

She told NCR that she has previously interacted with Thompson and supports some of his efforts in the archdiocese, but believes he has a narrow understanding of LGBTQ issues and indviduals.

"The sad thing is what's going to happen is that Catholic schools are going to take a big hit," she said, adding that she knows of several families that have already pulled their children out of schools and others that are considering following suit.

As the rally concluded, participants drove their cars in a circle around the Catholic Center with signs calling for greater welcome and a rescission of the policy — vowing that their fight is not over.

DignityUSA is currently collecting signatures on a letter it intends to send to Thompson, along with U.S. papal nuncio Archbishop Christophe Pierre and Cardinal Giuseppe Versaldi, prefect of the Vatican Congregation for Catholic Education.

DignityUSA Executive Director Marianne Duddy-Burke told NCR that more than 750 people have signed the letter. She hopes Thompson will eventually meet with key LGBT leaders in the archdiocese.

"We're starting to see people withdrawing their talents and labor from the institution," she warned.

While the archdiocese did not commit to a meeting, a spokesman told NCR in a statement, "The Archbishop is in constant communication with members of the Archdiocese and school community, and he has heard from numerous families who choose Catholic schools precisely because they strive to integrate the Catholic faith into every aspect of school culture and are grateful for how the Archdiocese is protecting the well-being of students and accompanying students and their families toward a deeper faith."

"The purpose of Catholic schools is not only to provide an excellent academic education, but to help families form their children in the Catholic faith," the statement continued. "The Archdiocese strives to foster a school environment where students and teachers can grow deeper in their faith as children of God, respected in their dignity, free from any form of bullying or harassment."