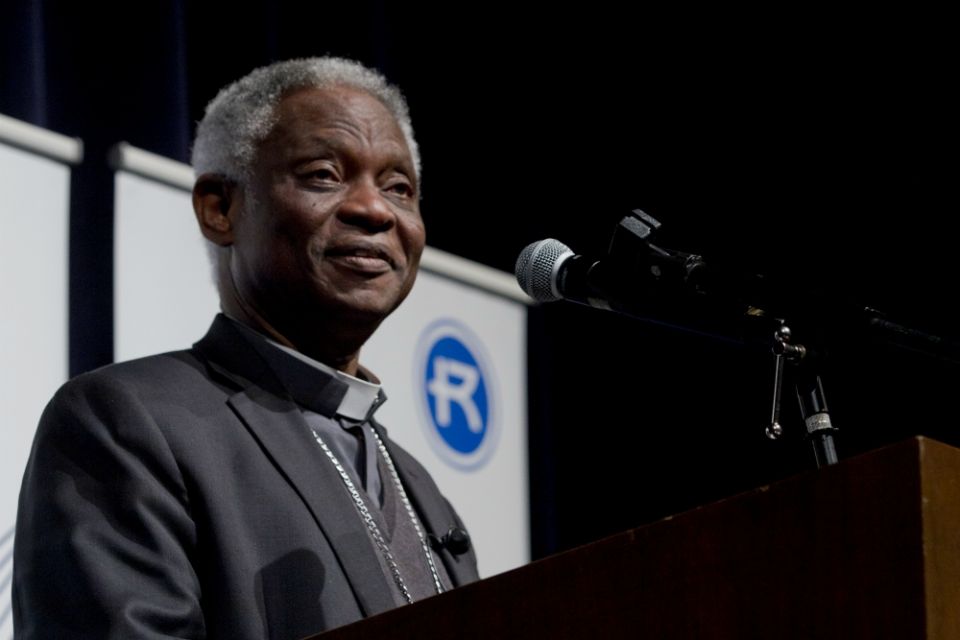 "The mission of us as a church and as Christians recognizes that deep down ... even in humiliating and denigrating situations, people still have their dignity. Our task and our mission is to help them live this dignity, to help them have that experience of dignity," Turkson said.

As prefect of the Dicastery for Promoting Integral Human Development, Turkson has played a leading role in spreading Pope Francis' concern for today's refugees and migrants. According to the United Nations' refugee agency, there are 68.5 million forcibly displaced persons in the world today, the highest number in historical record.

The Ghanaian cardinal said that Francis "holds this issue at heart." The plight of refugees "requires our sympathy, our solidarity and our care, rather than any kind of strict legal treatment that can be applied to them."

Turkson expanded that idea in a pre-speech media session, saying, "Everybody has dignity that needs to be respected, even those who are away from home, even those who are forced to be on the road. Every human person, regardless of his condition, has something that no court of law can take from him or bestow on him. And that is his dignity by reason of the fact that he is created in the image and likeness of God."

A leading voice on Catholic social teaching, Turkson spoke Jan. 17 at the Jesuit university in Kansas City, Missouri, to a packed audience of roughly 500 students, faculty and campus visitors. The title of the talk was "The Plight of Refugees in Today's World."

He told NCR before his speech that Francis has stressed that the world community cannot simply "look at the situation from the balcony," or say, "I won't get involved, this doesn't affect me." Doing so, he added, would feed a culture of indifference the pope has regularly denounced.

"That cannot be the posture. ... We need to get involved," the cardinal said.

During a question-and-answer session after his speech, Turkson was asked why the United States should focus on aiding refugees from other countries while it is heavily in debt — estimated at nearly $22 trillion — and has its own domestic problems.

Turkson responded by saying it is not the responsibility alone of those nations with a surplus of resources to help those in need, "otherwise you would never" see countries offering assistance. 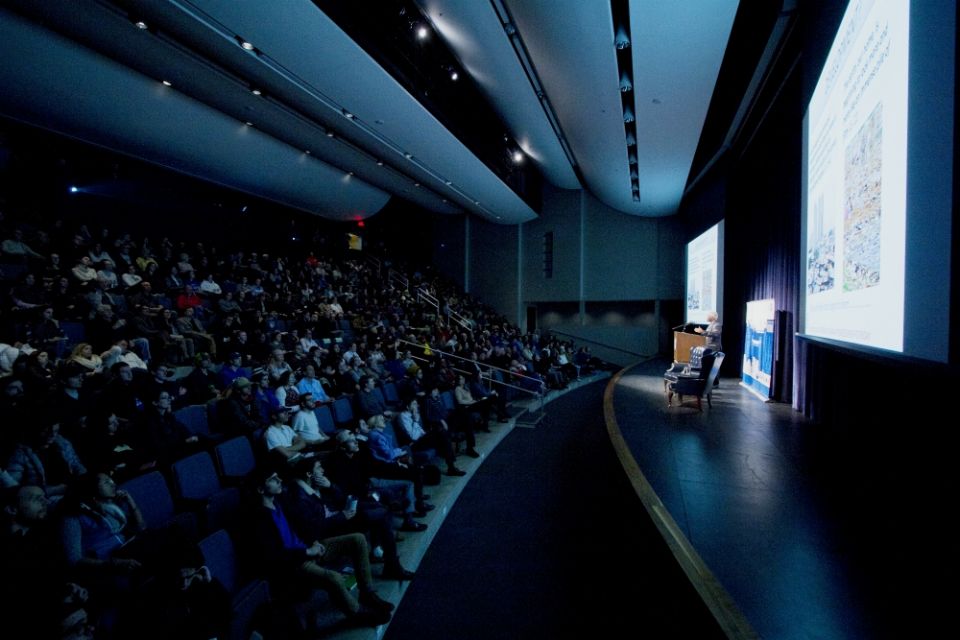 Turkson raised the example of Malta, a small island nation in the Mediterranean Sea that in early January helped end a two-week international impasse by allowing two ships carrying 49 African migrants to disembark in its port. The migrants were to be relocated among eight different European countries.

He also pointed to the pope's own examples: in visiting the island of Lampedusa, a major port for migrants and refugees, as his first papal trip; and in April 2016, bringing three Muslim families to Rome from a refugee camp on the Greek island of Lesbos.

Turkson said the movement of people has forever been a part of human history. He said Francis stresses four principles in aiding refugees and migrants: welcome, protect, promote and integrate. It's up to every nation to discern what it can prudently do to aid those fleeing violence at home, dislocated due to natural disasters or simply seeking a better life.

But that only addresses part of the issue, he said, comparing the present plight of migrants and refugees to a running water tap, with most efforts focused on "trying to mop the water."

"We have all kinds of systems to mop the water. But unless we learn to turn off the tap, we shall forever be mopping water," Turkson said. That includes looking at what systems and policies are driving people to uproot their lives, and what changes can ensure people's safety in their homelands.

The cardinal's brief stop in the Midwest came sandwiched between two other destinations: Honolulu, where he spoke at its diocese's annual Red Mass, and Panama City, where he was to join World Youth Day, which kicked off Tuesday.

Turkson spent the first portion of his talk explaining the point of view that Catholic social teaching brings to issues such as migration and refugees — that all people have dignity and that should be supported through integral human development — and how it led to the formation of his dicastery in 2016 to lead the church's mission on that front.

He highlighted what popes since Paul VI have written on the issue of human development, which he summarized as promoting the flourishing of all dimensions of the human person — social, cultural, spiritual, economic, political, technological — and which, driven by "true, sincere charity," represents a shared concern among all in every part of the world.

"There is no 'I' who can live in full dignity as long as there are other 'I's who are living in indignity," Turkson said.

He echoed Francis' recent messages to world leaders and to diplomats to the Vatican about the critical role politicians play in creating peace, especially at a time when a rise in "populist nationalism" threatens the "sense of brotherhood of the human race."

That discord threatened the adoption of the landmark Global Compact for Safe, Orderly and Regular Migration, which was signed in Marrakesh, Morocco, in December. The agreement, adopted by 164 nations, was backed by the Vatican, while the U.S., Hungary and Australia were among those opposed. Still, Turkson noted the role the migration and refugee section of his dicastery played in the compact, putting forth 15 points ultimately included in the text.

The cardinal surveyed the situations of refugees across the map, including in his home country of Ghana, where the church has worked to help make a home for those who fled civil wars in Liberia and Sierra Leone.

"It's a community that's alive," he said of the refugees. "The people are not going, they stayed ... and it's up to us to support, to come close to them."

Turkson also highlighted people who have fled South Sudan into Uganda — which despite being one of the world's poorest countries is considered perhaps the world's best place for refugees — as well as those forced from their homelands in Syria, Palestine, the Rohingyas of Myanmar, and Venezuelans who have left for Brazil and Colombia.

As for migrants from Central America seeking to enter the United States, Turkson declined to speak in detail, acknowledging, "The situation is so much alive." Instead, he focused on the work of the U.S. Catholic Church to show solidarity, especially by providing legal services, with the people at the southern border.

A standoff over funding for a new U.S.-Mexico border wall has led President Donald Trump to keep parts of the federal government shut down now for a month. Saying that even the Vatican has walls, Trump has repeatedly defended his proposed wall against critics who call it "immoral."

Asked by NCR if he wished to weigh in on the morality of walls, Turkson said simply, "The Vatican would probably not be the best example of walls."

The cardinal then referenced the Statue of Liberty, which he said "is there to welcome people to a new lease of life."

"If that's still there and it still has value, then we need to find a way of making that value real."

Even after walls come down, they leave scars