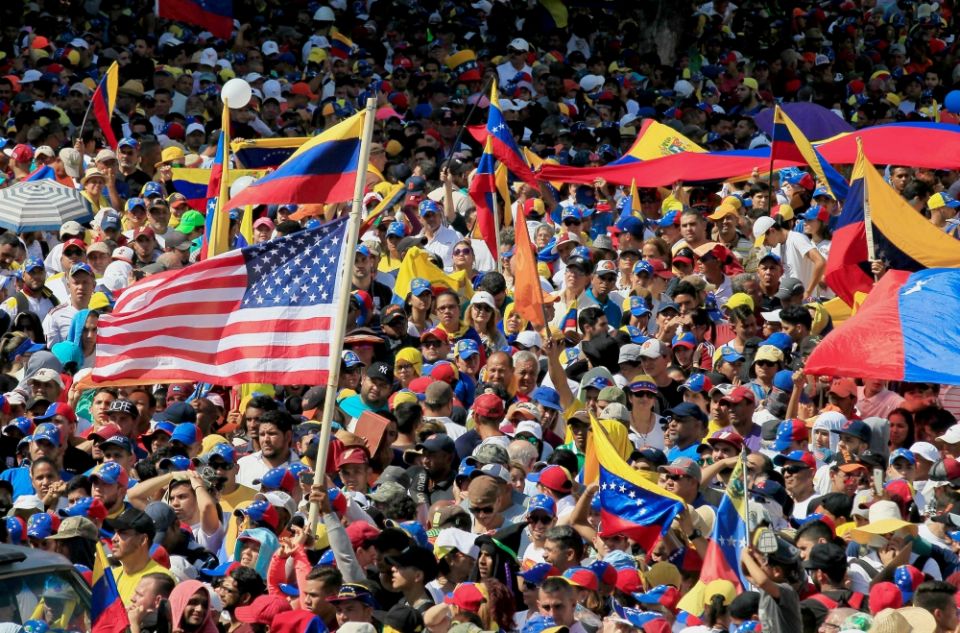 A U.S. flag waves in the crowd as protesters take part in a rally against Venezuelan President Nicolás Maduro's government in Maracaibo Jan. 23. (CNS/Reuters/Isaac Urrutia)

The Catholic Legal Immigration Network (CLINIC) will send a letter to Trump administration Cabinet members early next week to advocate that Venezuela be designated for temporary protected status.

The letter states that designating Venezuela for temporary protected status — temporarily protecting from deportation Venezuelan nationals who register with the U.S. government — "would potentially safeguard the lives of 72,000" people.

According to CLINIC advocacy attorney Lisa Parisio, more than 230 national, state and local organizations have signed on to the letter, which will be sent to Secretary of Homeland Security Kirstjen Nielsen and Secretary of State Michael Pompeo.

According to the U.S. Citizenship and Immigration Services website, the Secretary of Homeland Security has the authority to designate a country for temporary protected status due to three possible conditions:

The law mandates that the Department of Homeland Security consult with other agencies — typically the State Department — which is why the letter is also addressed to Pompeo.

CLINIC's letter argues that Venezuela satisfies both the armed conflict and extraordinary conditions criteria due to an "unprecedented civil crisis" that makes it unsafe for Venezuelans to return to the state. The letter cites "government-sanctioned persecution and killings; pervasive crime; and medicine and food shortages" as evidence Venezuela meets the law's criteria.

The letter also notes "an erosion in civil and human rights; press repression; use of arbitrary arrests and detention; and spontaneous riots."

The crisis, which CLINIC writes began in 2017, has escalated in recent months due to tensions between President Nicolás Maduro and opposition leader Juan Guaidó, who called Maduro's second term illegitimate and swore an oath Jan. 23 to serve as the interim president of Venezuela. Despite international pressure from many Western countries, including the U.S., Maduro continues to hold power and control of the military.

In recent weeks, Maduro has blocked the delivery of international aid into Venezuela as well as detained a number of journalists, including American Cody Weddle, who has written for NCR and Global Sisters Report. Much of the country is currently in a power blackout that began on March 7, which Maduro has blamed on anti-government saboteurs.

Parisio told NCR that "many studies" suggest that "removing the threat of deportation enhances community safety," largely because people are less afraid to report crime, and temporary protected status holders are required to go through a thorough vetting process.

Under law, a country can be designated for a six-, 12-, or 18-month period, with an option for the Secretary of Homeland Security to extend temporary protected status if necessary while unsafe conditions persist. The status holders must go through the vetting process every time the designation is extended.

Currently, 10 countries are designated for temporary protected status. The Trump administration has tried to end the status for six of the 10 countries. As NCR previously reported, those six represent about 97 percent of status holders. NBC News reported March 7 that a federal judge extended the status last week for people from Sudan, Nicaragua, Haiti and El Salvador. NBC also reported that a group of 24 senators asked President Donald Trump to designate Venezuela for the status.

Parisio told NCR that the Trump administration has not yet said whether it will extend South Sudan's temporary protected status designation for another increment, although under law a decision was due March 3.